on March 08, 2015
Welcome back to the second (of 12) Group Break Box Breakdowns.  Yesterday, I posted the entire contents of box #1 from the 2015 Topps Heritage group break.  Today, we look at the second box from the case.

Each hobby box comes with a box topper - this time around we ended up with one of the three card advertising panels.

The advertising panels are unfortunate in that they feature three different teams.  Thus, at the end of the break I'll have to randomly assign the card to one of either the Dodgers, Giants, or Yankees.

Each hobby box also contains eight different short prints on average - and we found our eight. 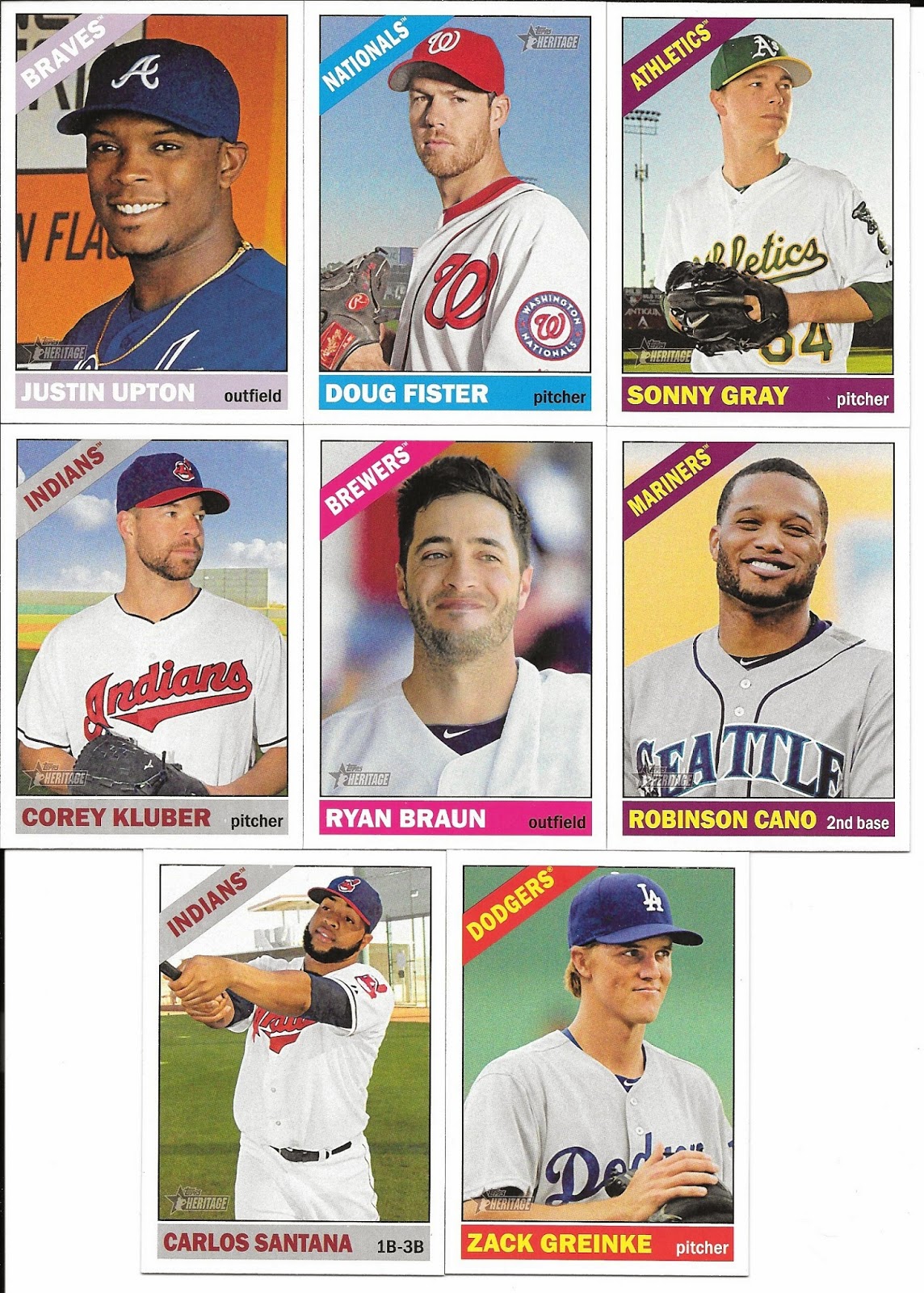 I would say the Indians were the big winners here since they landed two of the eight short prints.  JediJeff claimed the Tribe so maybe those two short prints will convince him to try for the entire set...

Moving on to the inserts, we begin with the Baseball Flashbacks. 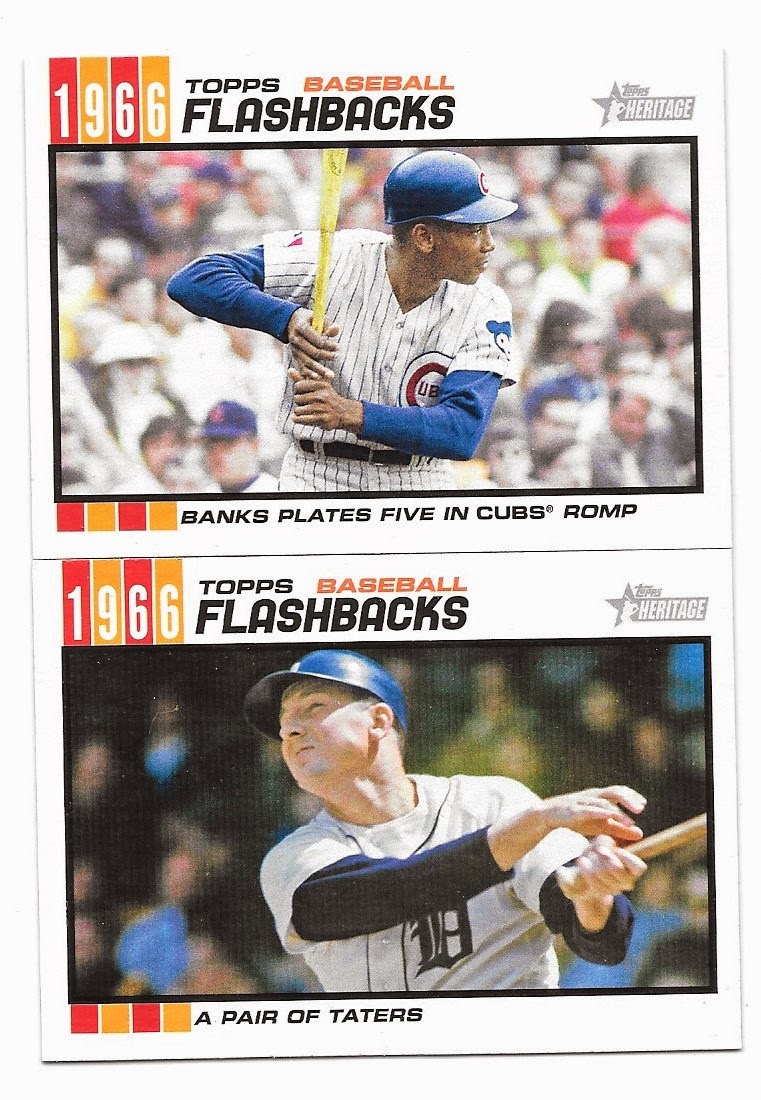 Once again, I like both of the Flashback cards - and I like the News Flashbacks cards as well. 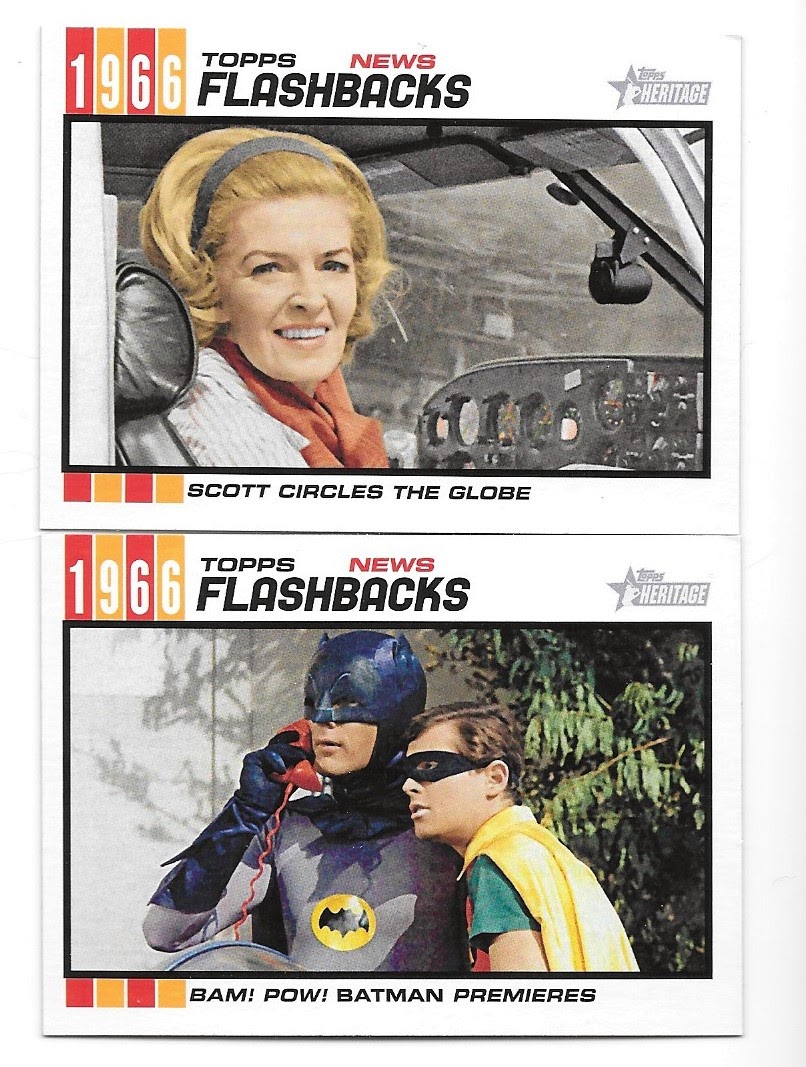 ...especially that Batman card.  I used to love watching the old Batman shows on Nick at Night (or some such channel) when I was a kid.  I might have missed growing up in the sixties by a couple of decades but that doesn't mean I can enjoy some campy tv shows today!

The Then & Now cards are seeded 1:10 packs - and this time we landed three rather than two.  Even better, the Koufax/Kershaw card gets immediately assigned to the Dodgers pile...I appreciate that as the group break host!

We finish off the basic inserts with the three New Age Performers (1:8 packs).

I like the font that Topps used for these - they look suitably "new" in an old fashioned sense.  Good work!

Looking at some of the other, slightly rarer stuff - we found one Chrome card...and it goes to me! 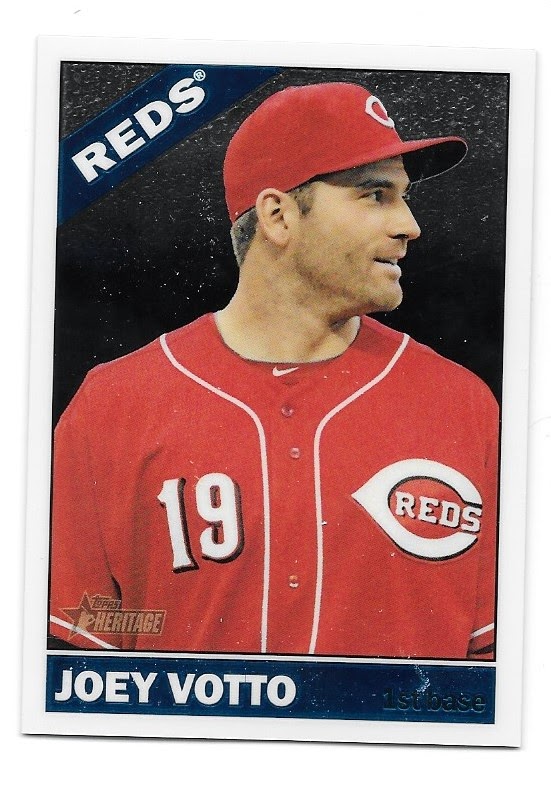 That's Joey Votto #989/999.  I am hopeful that Votto turns it back around this season and becomes an offensive force.  I'm not sure the Cincinnati media will cooperate though...they seem hellbent on destroying Votto for reasons that escape me. 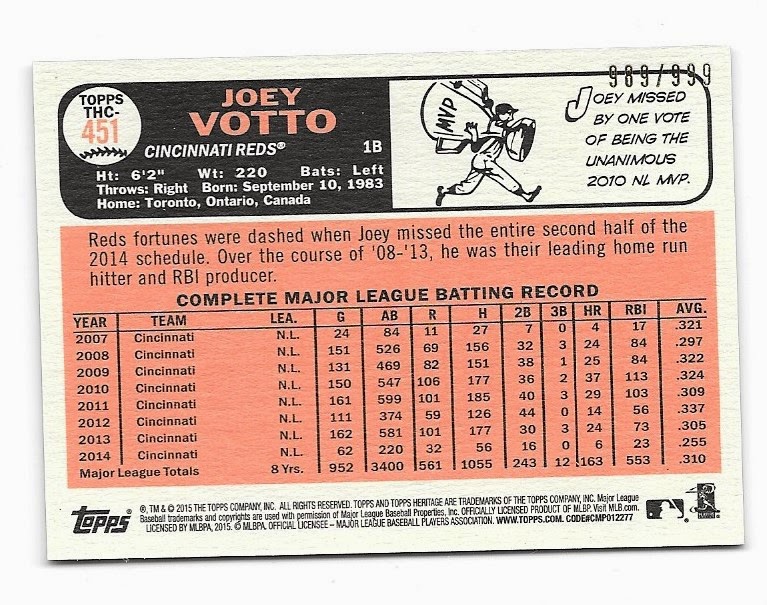 In addition to the regular chrome, we also pulled our first Chrome Refractor of the break.  The refractors are seeded 1:41 packs so you'd expect one per every other box or so.  Our refractor is Jeff Samardzija and is headed to the Athletics. 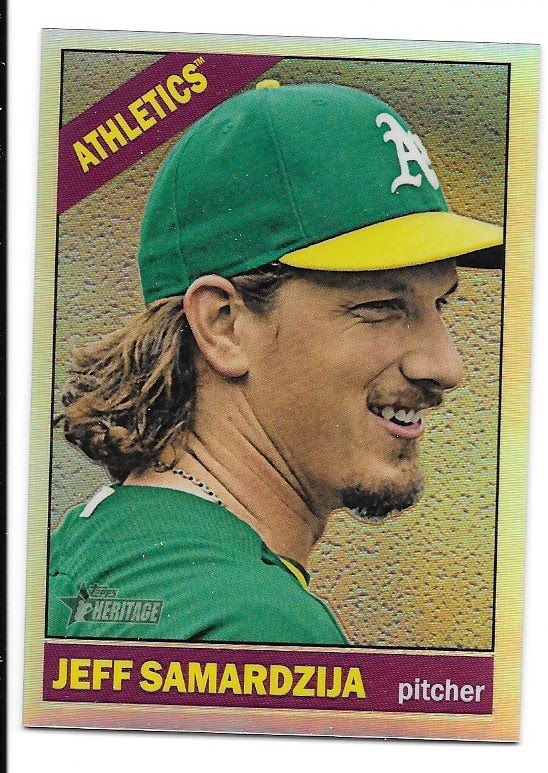 A big congrats to Gavin who has the Athletics!  For those that are wondering, the chrome refractors are numbered out of only 566.  This particular card is #555/566. 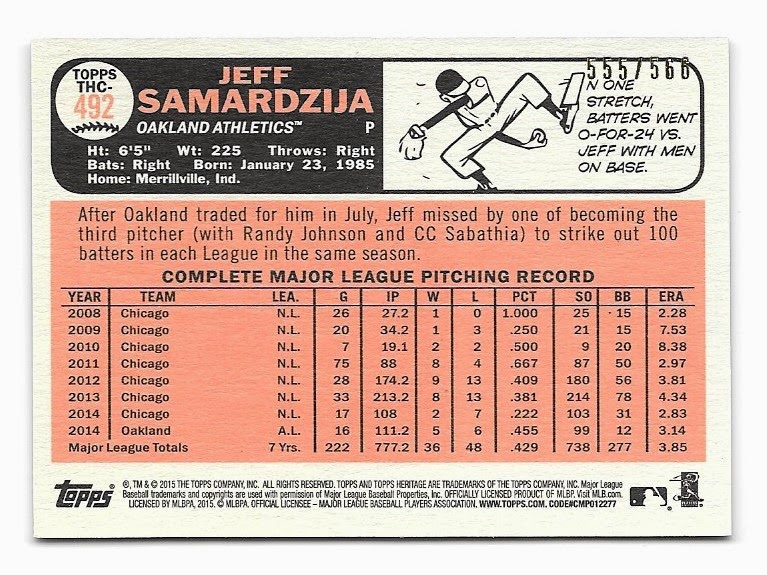 Our hit from box #2 was another red relic...but this one is headed John M. who claimed Atlanta. 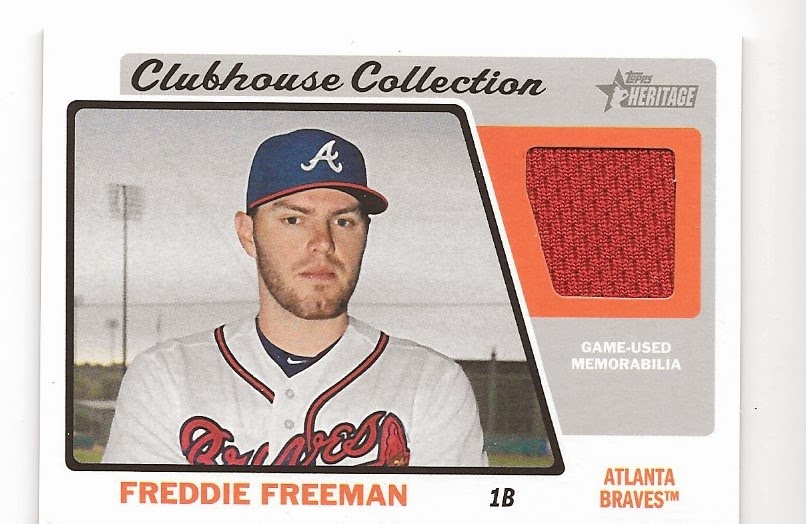 That's a nice looking Freddie Freeman relic...and again, I love the fact that the color of the cloth is something other than white or grey.  Good stuff again by Topps!

The other box hit is the action variation.  This time it's of Giancarlo Stanton of the Marlins. 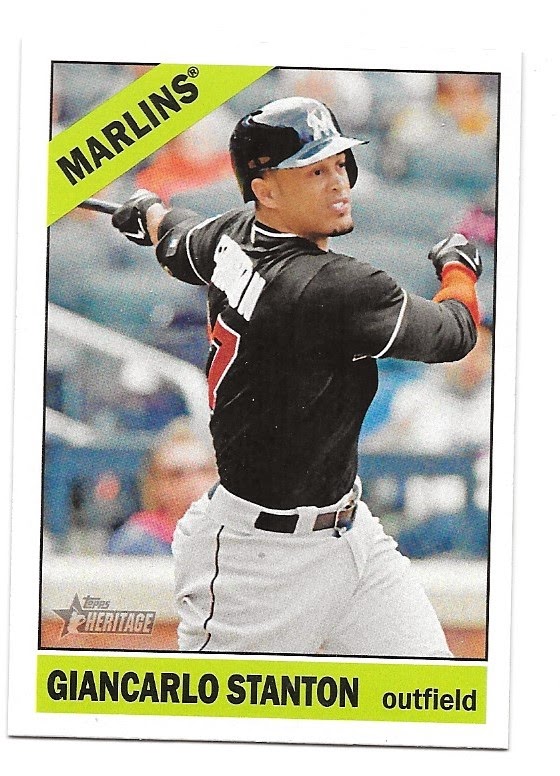 Marc B. has the fish so this one's headed to him. 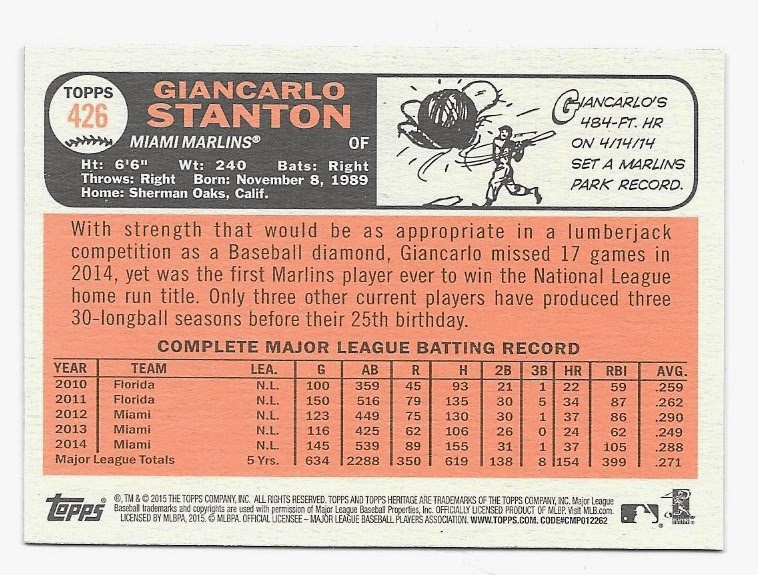 We end with a card that I overlooked during the video opening.  There are so many variations in Topps Heritage that it's hard to pick them out at a first glance.  This one is actually one of the gum back variations - and it's of Asdrubal Cabrera of the Washington Nationals. 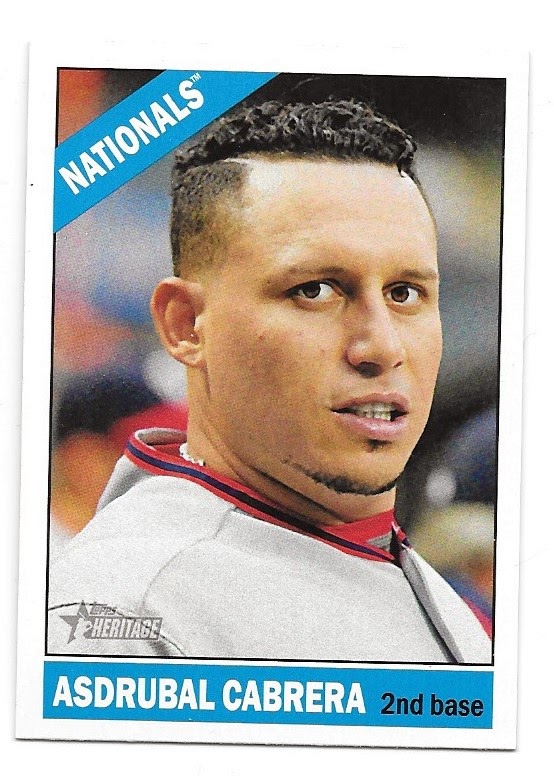 Congrats to Kirk for getting our first gum card of the break.  I know that I did catch one other gum card in the first six boxes...but I'll try to make sure to catch any others as I go back through the next few boxes.  It should be noted that the gum cards have the same code as the regular base cards...a big pain! 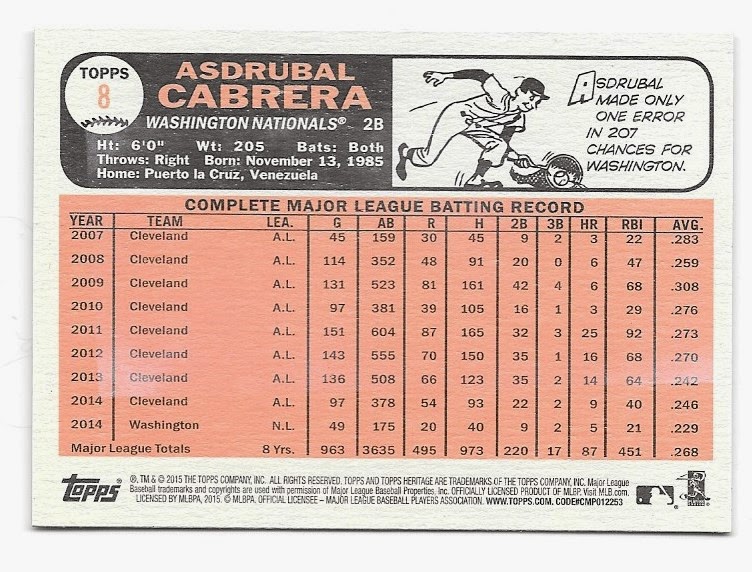 You can make out the gum stain fairly well from the scan.  It definitely smells like bubble gum...sort of weird but also sort of cool.  I can't decide how I feel about these cards...but I will say that I do applaud Topps for trying something off-the-wall different.  This has shades of Pacific written all over it...and as a lover of most Pacific sets, I say that as a true compliment!

I hope everyone is enjoying the break so far (whether you are actually in the break or not).  Through two boxes I would say we are doing pretty darn good.  Let's hope the good times keep rolling!
Group Break 2 in 2015 Topps Heritage 2015