on March 20, 2015
The 2004 Topps Clubhouse Collection set is unlike any other set that I've ever opened a box of before.  You get ten packs per box with only two cards per pack...but every single card in the set is a relic card! 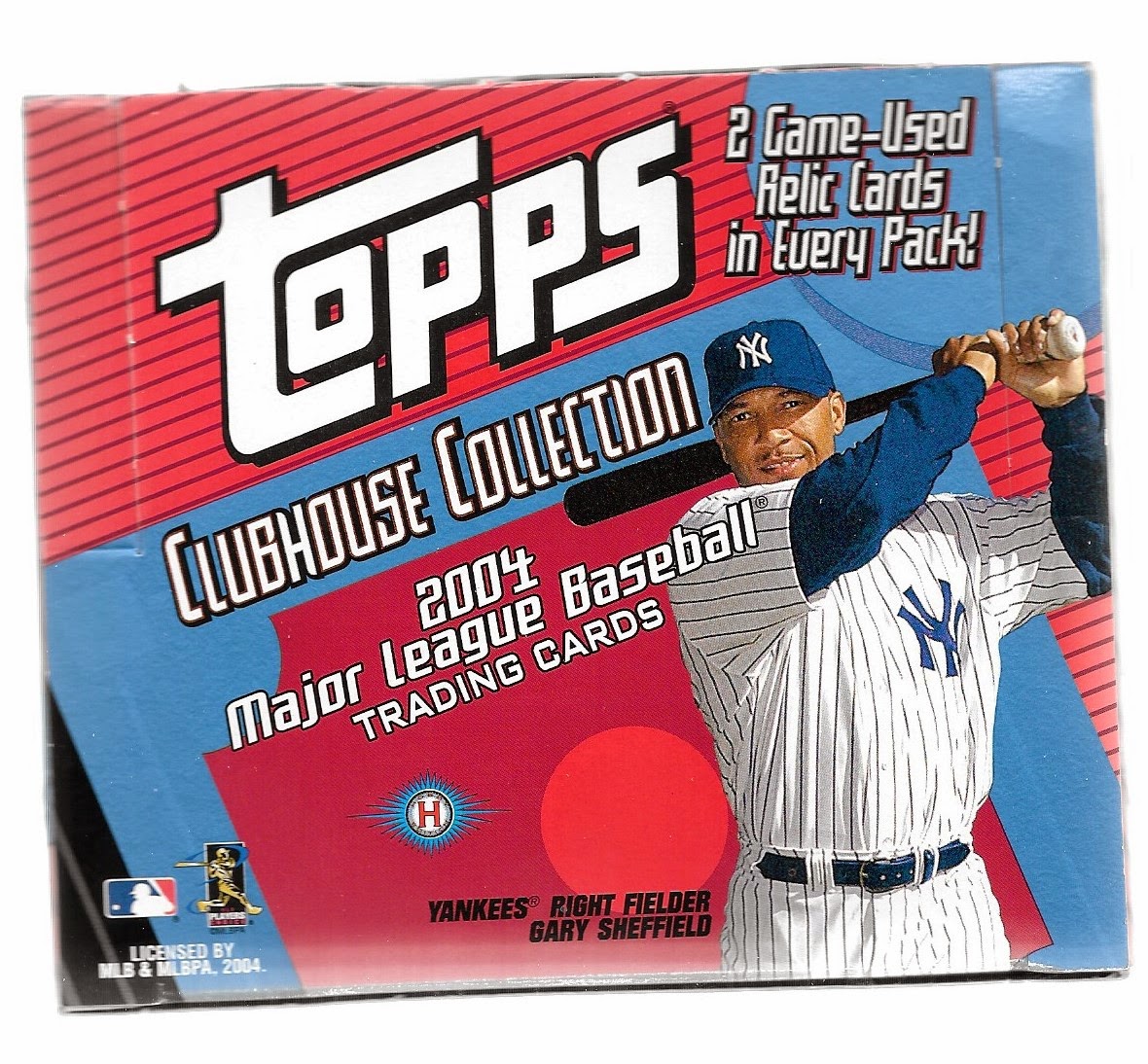 That's right, it's a set that is comprised entirely of relics (plus a few autographs) - not a single base card in the entire set!  According to Baseballcardpedia, the entire set runs 154 cards deep and the original two-card packs sold for $30 each.  Ouch!

My box was opened as part of a group break so I was simply hoping to pull a Barry Larkin relic - something I only learned about after looking at the base card relic checklist!  Unfortunately (spoiler alert), my box yielded ZERO Reds which means no Barry Larkin card for me.  The entire checklist is below: 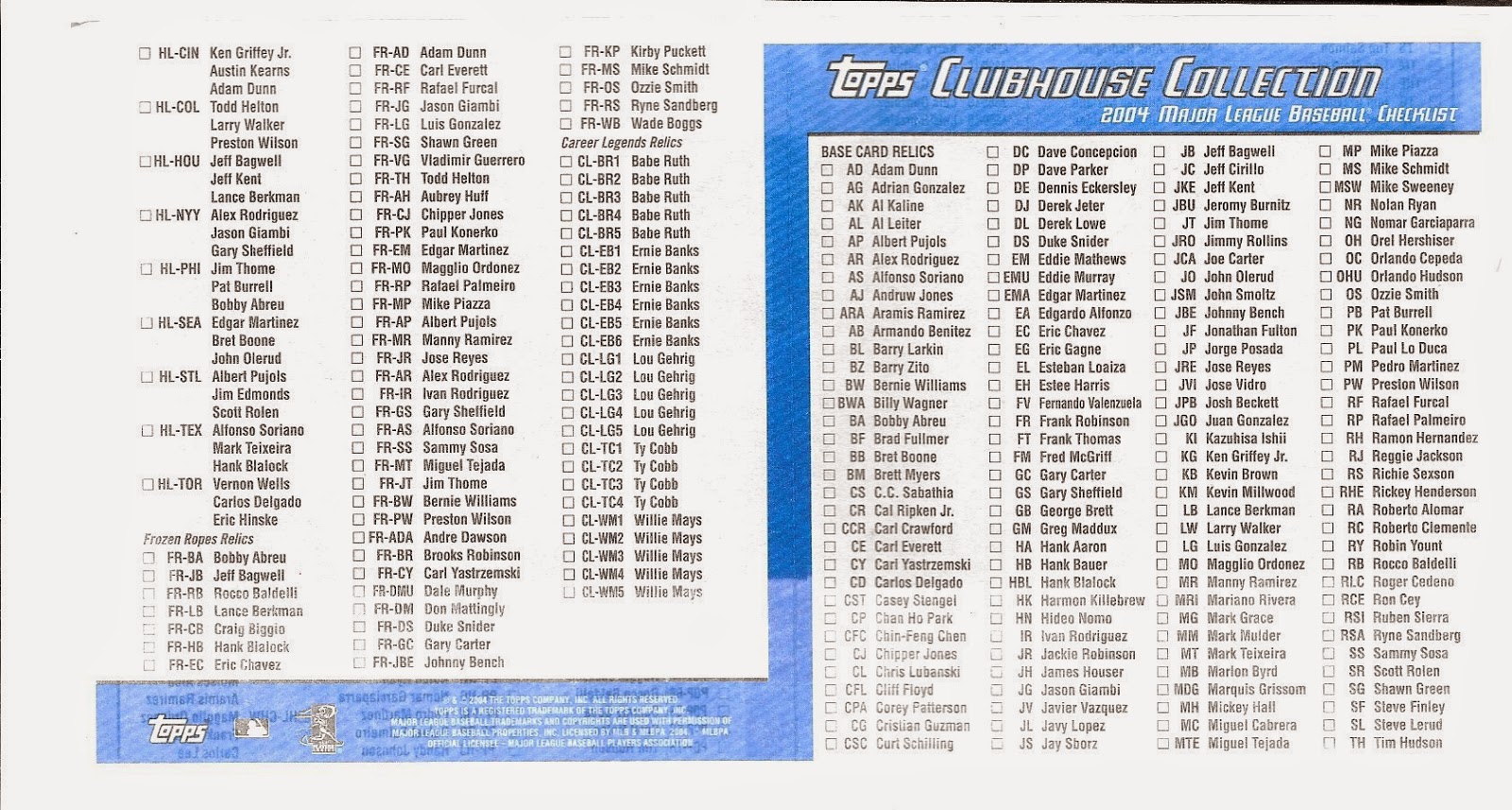 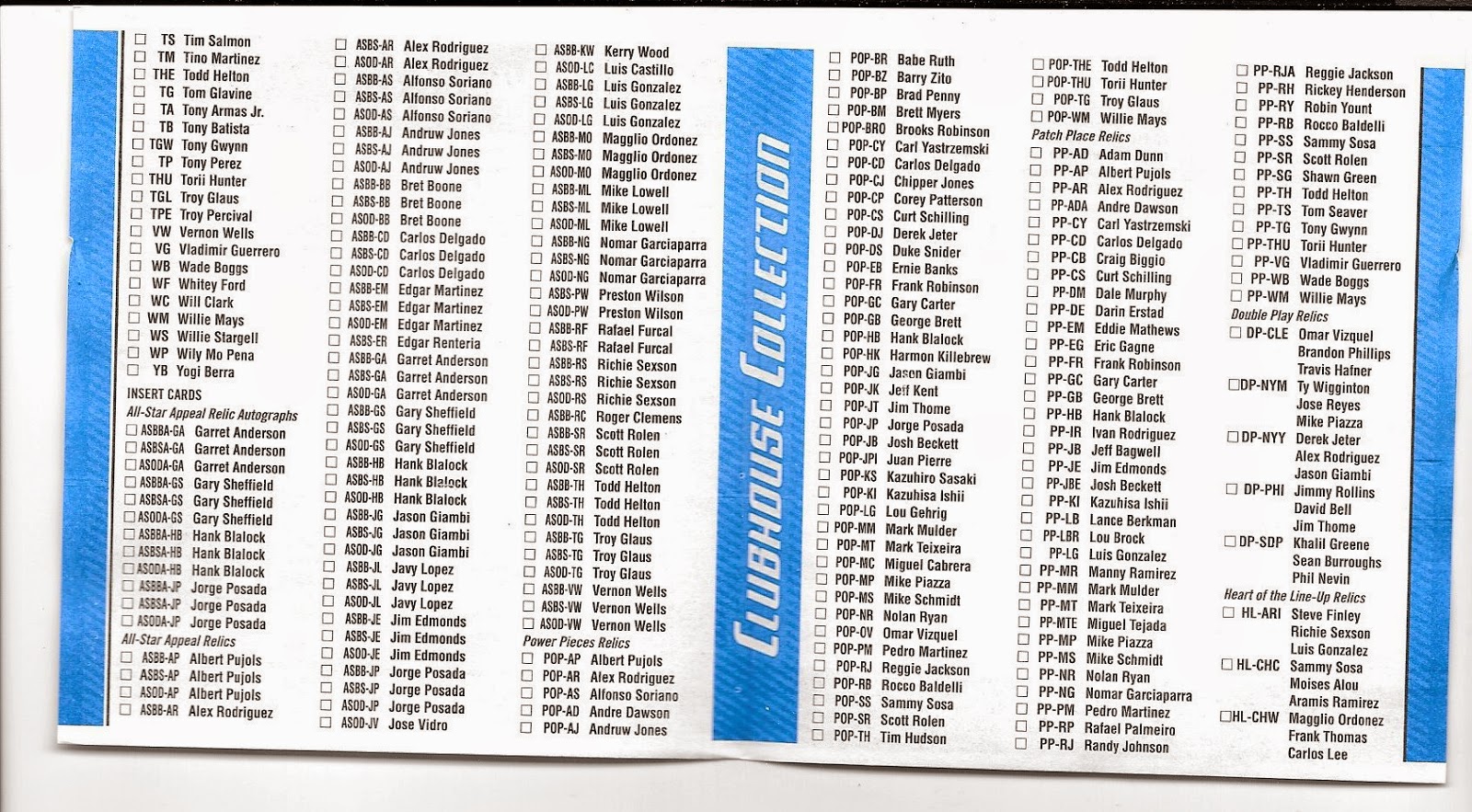 The pack wrapper features Gary Sheffield which is sort of an odd choice given all the true superstars in the set but hey, it wasn't my call. 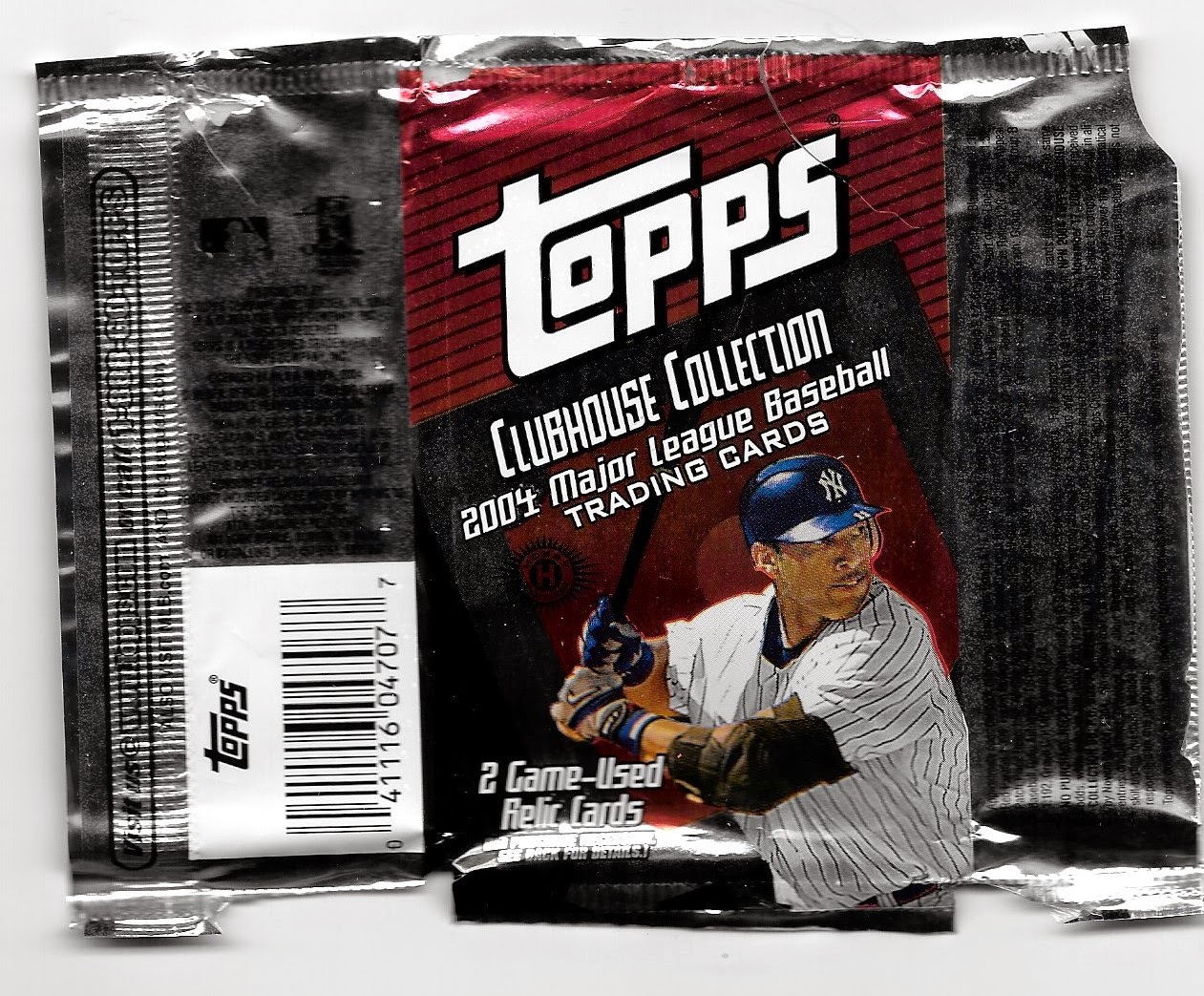 I'm sure the odds are nearly impossible to read on that pack wrapper scan so here is what you can hope to find:

That's a lot of cool stuff - including a few autographs as possibilities!  Unfortunately, our box did not include any of the super rare stuff...nor any autographs.  What we did get though was 15 of the 20 relics being part of the base relic group.  Unfortunately, I could not find which players belonged to which group (A-E) for the base relics...though if I had to guess I would say the retired stars belong to the rarer groups (either A or D). 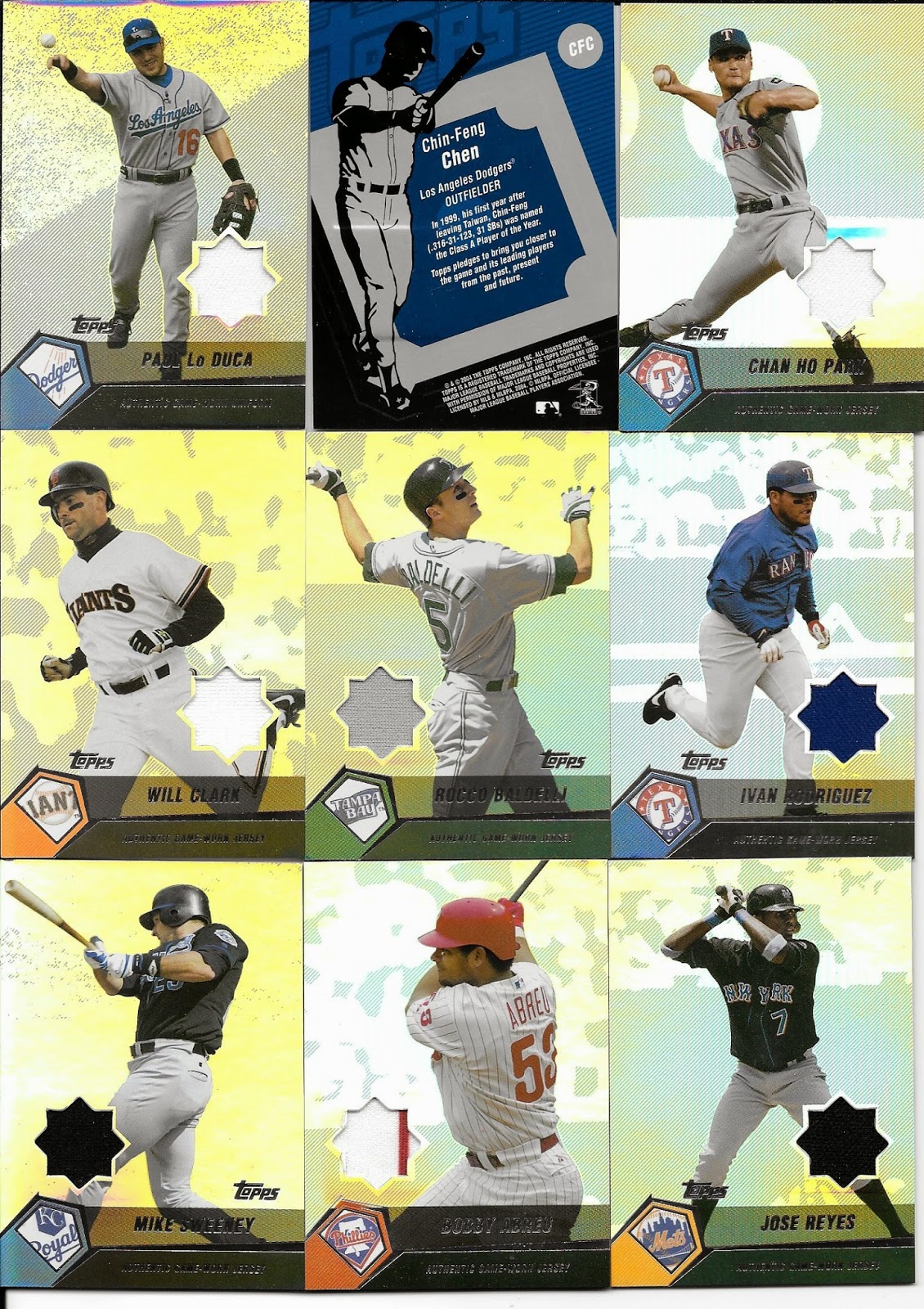 As I said, 15 of our 20 hits were of the basic version, though not all base relics are quite created equal.  For instance, the Abreau from above featured a pinstripe while the Reyes, Sweeney, and Pudge cards all featured something other than white or grey.  The back of the hitter cards all look exactly like the Chen card while the pitcher cards have an image of a pitcher rather than a batter but otherwise also look identical. 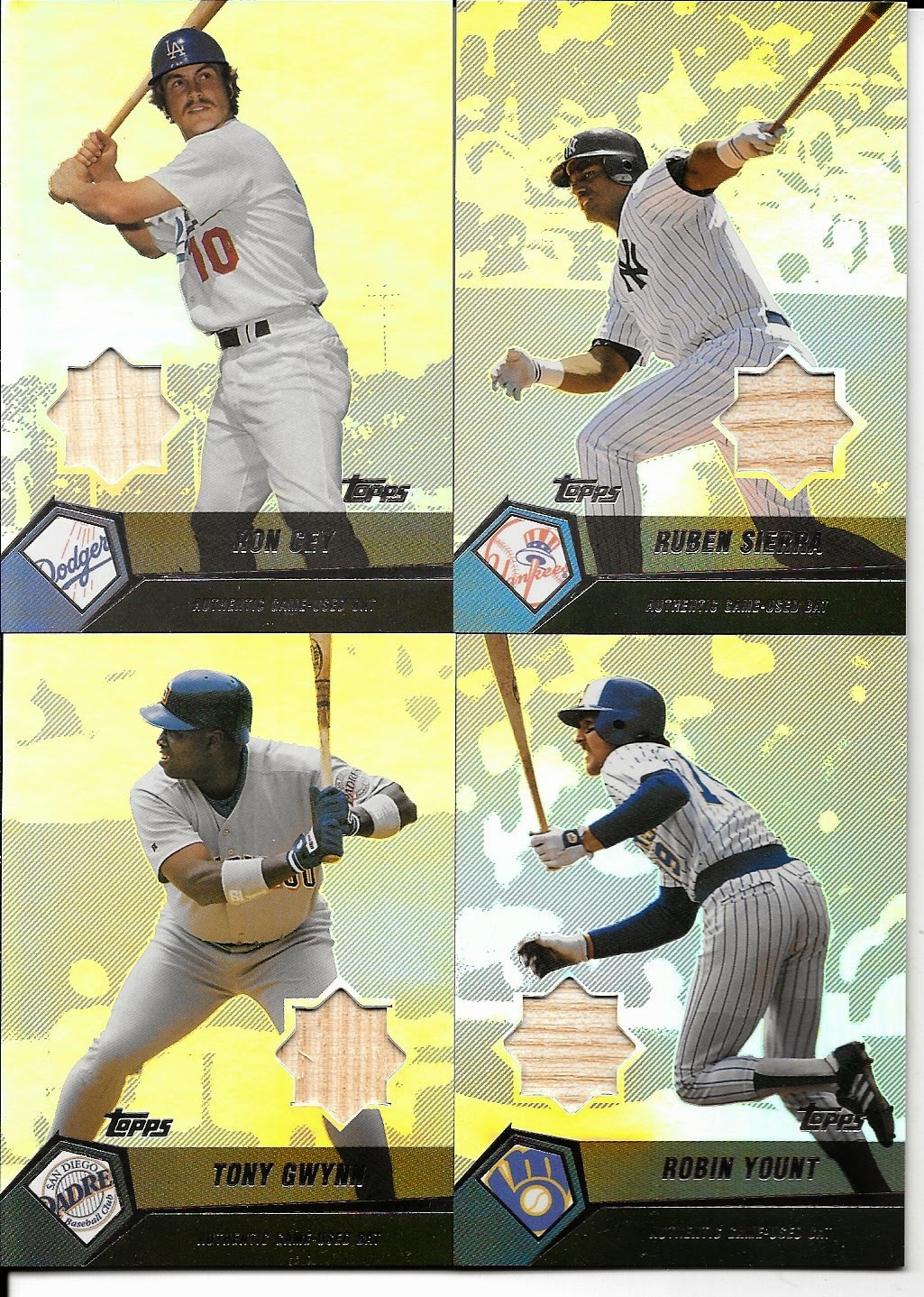 From the "standard" cloth relics to the "standard" bat relics - this time our group of names is much, MUCH better!  I like all of these cards quite a bit - especially the Cey, Yount, and even the Gwynn!

While the bat cards were certainly nice, the best two base relics of the box are the next two cards... 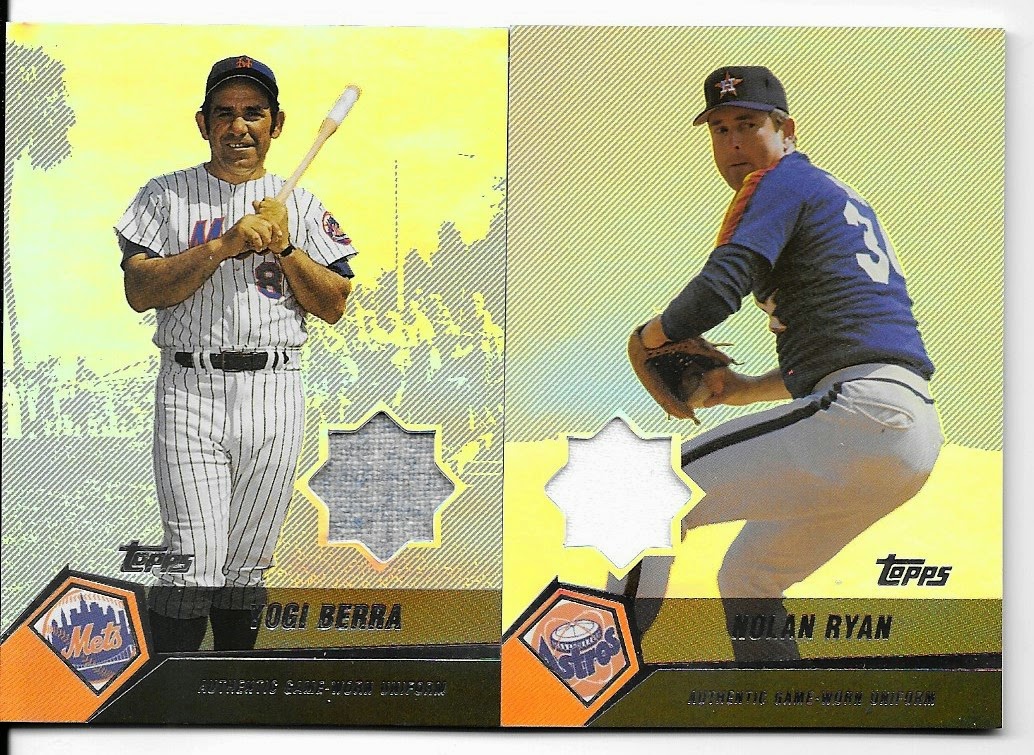 Yeah, that's a Nolan Ryan relic plus a Yogi Berra (as a Met) relic.  Good stuff for sure!  The Ryan relic is plain white but the Yogi relic is a rather interesting blue/white material.  It almost looks like faded denim - strange...and definitely unique!  For my money, I think these were my two favorite cards out of the entire box! 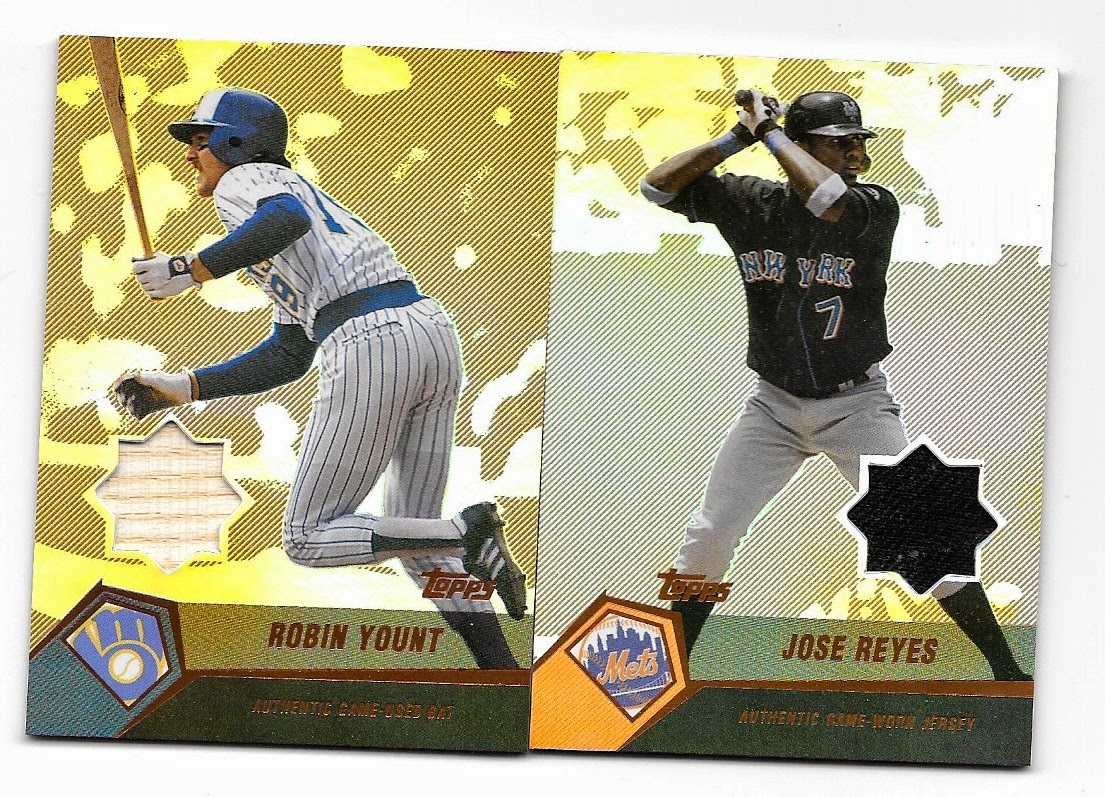 Moving on to the non-base relics, we found a pair of copper parallels numbered out of 99.  That makes sense since the coppers are seeded 1:4 packs meaning each box should have two or three of them. 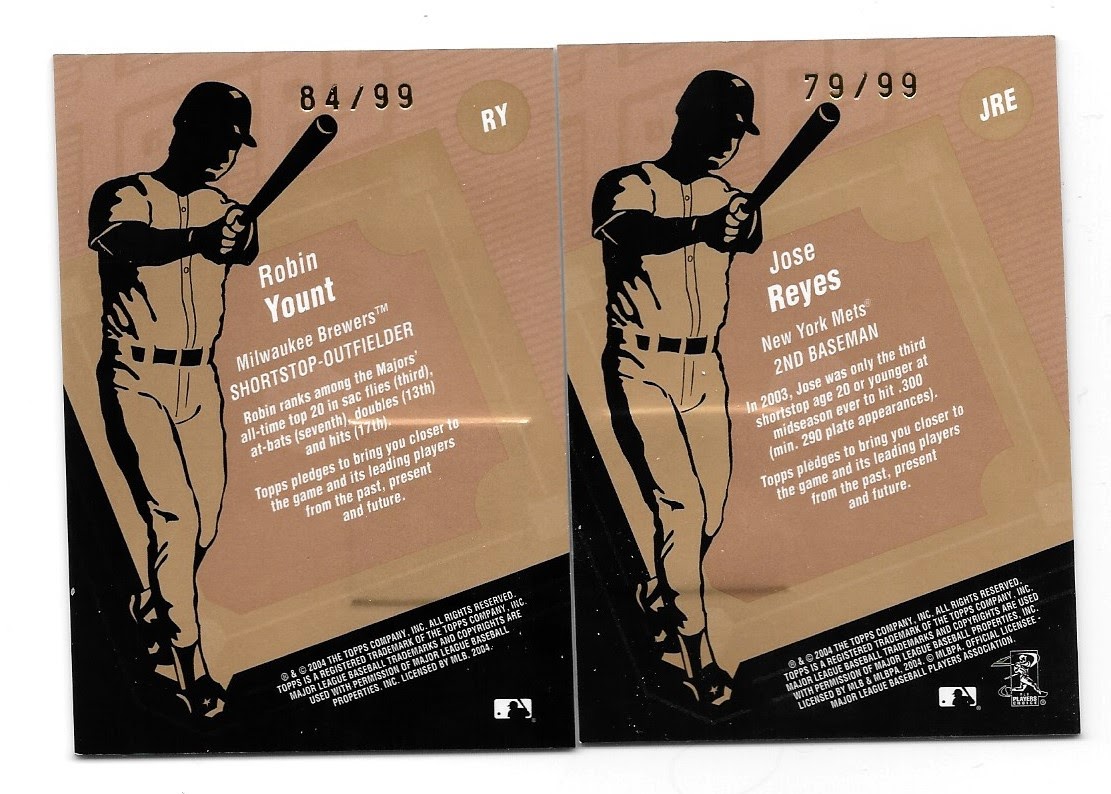 You might have noticed that we also pulled a regular version of both Yount and Reyes in the box.  That was a bit disappointing from a group break perspective since it means of the twenty hits two teams ended up with two hits each for certain.  Of course, as it turned out the Dodgers walked away with three hits (as did the Mets) while the Brewers and Rangers both landed two hits.  My Reds?  Zero. 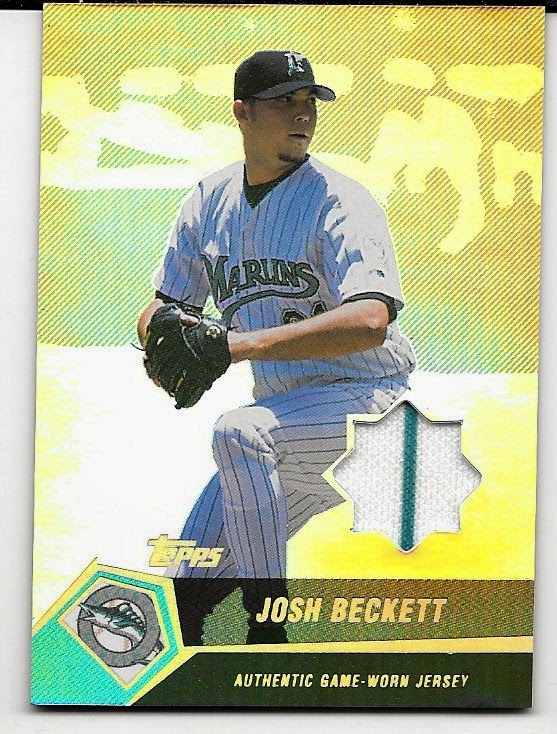 The final three cards of the break are the rarest cards that we pulled.  We begin with the black parallel of Josh Beckett that is numbered out of 25.  I like the pinstripe in the card quite a bit - makes for a more exciting relic card for sure! 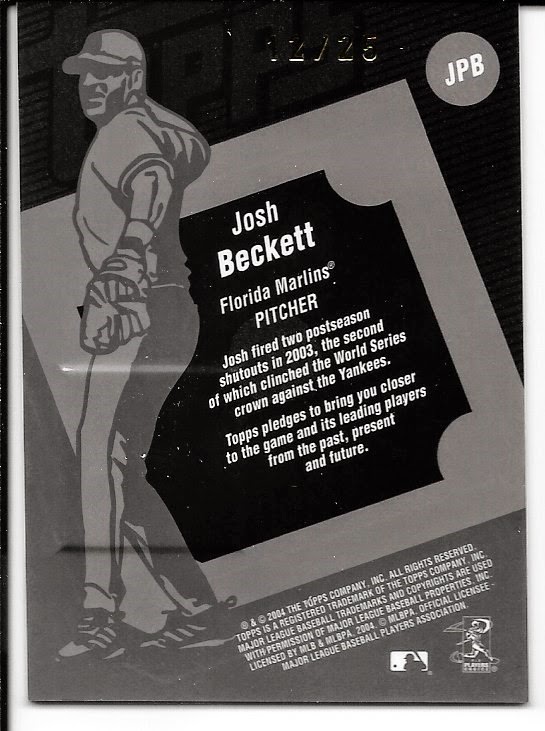 The black parallels are seeded 1:16 packs so we did well to get one in our single box.  The numbering is tough to read from the scan but this card is numbered 12/25.

The final two relics are both seeded 1:26 packs (or one per every 2.6 boxes).  I can't complain about that either.  We begin with a Frozen Ropes card of Paul Konerko of the White Sox. 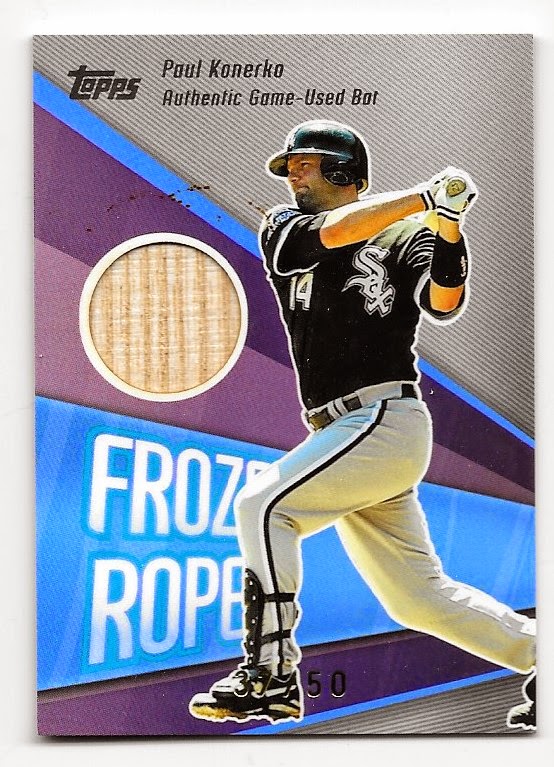 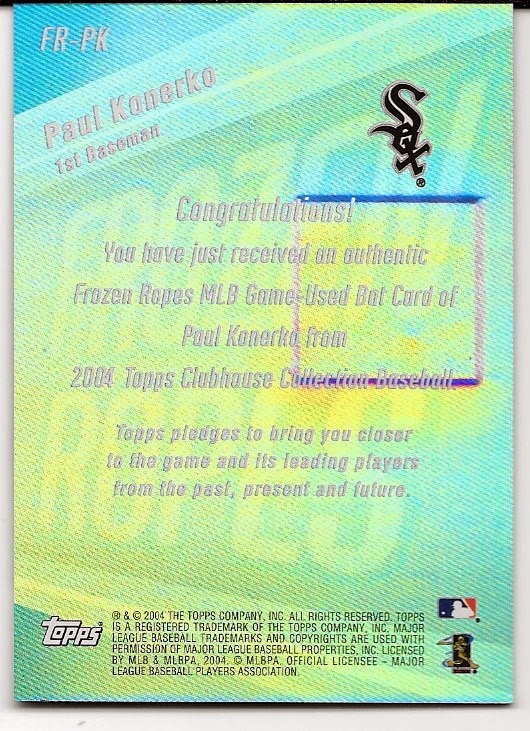 The Konerko is numbered 37/50 on the front of the card - and it features a game-used bat.  The back of the card is extra shiny which is why the scan looks a bit funny.

Finally, we end with a rather unique relic - it's a piece of the batting circle from the 2003 MLB All-Star game.  The subject is Vernon Wells and the card is numbered 78/90 on the front. 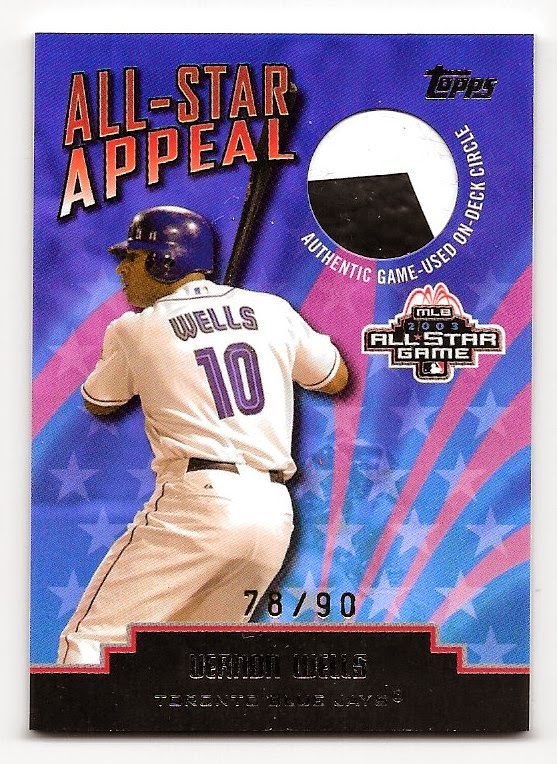 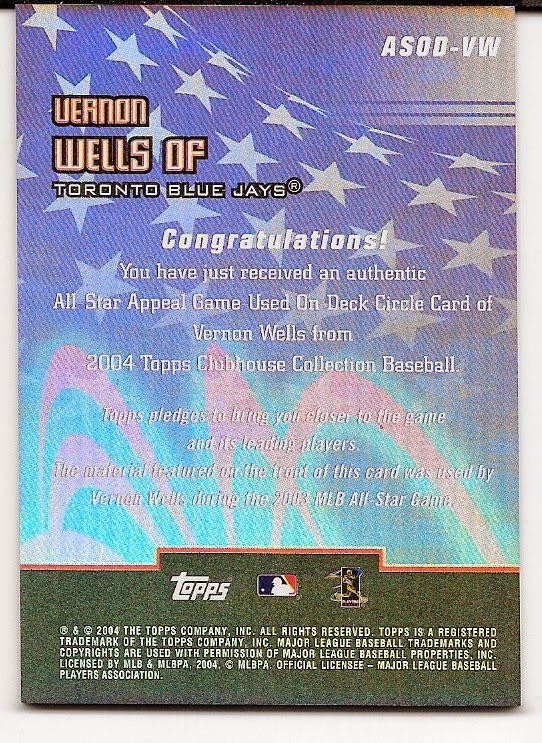 It's definitely a pretty cool card - I've seen shirts, pants, bats, benches, even gloves, baseballs, and bases..but this is my first on-deck circle relic that I've ever pulled.

All things considered, this was definitely a fun box to break but there were some issues.
1.  Each pack has only two cards and both cards stuck together.  Luckily, all of the cards were able to be separated without any damage occurring but it's still annoying.
2.  Speaking of separating, almost all the relics showed signs of cardboard separation where the relic resides - this is probably because the glue that Topps used has broken down over the years (the box was opened in 2015 - a full 11 years after the release of the product).
3.  For group break participants, getting so many cards with the same team was a bit of a bummer.
4.  The one card (Abreu) featured some actual damage around the relic cut-out.  Another (Ivan Rodriguez) featured a pretty heavy crease in the foilboard on the front of the card.  For a box that was originally around $250-$300, that's unacceptable.  I bought my box online but the original sticker on the box said it was for sale for $259.99 for comparison!

Overall, I give the 2004 Topps Clubhouse Collection the following rating:
Set Design:  B
Collation:  B-
Opening Thrill:  A
Overall:  B+

I had to dock some points on Collation for the repetition of so many teams and the damage to the couple of cards.  The opening thrill would have been an A+ if not for the separating issue that faced most of the relics.  The design is certainly solid but it's not spectacular - then again, you don't buy this set for the card design...you buy it because you love relics!
Box Review Topps Clubhouse Collection 2004