on August 21, 2016
A couple of days ago, I announced that I had decided to collect the 2007 Topps Allen & Ginter Flags of All Nations mini set.  The set contains a total of 50 cards - and at that point I owned exactly one of them thanks to an eBay purchase (that being the flag of Colombia).

Flash forward a couple of days to today and I've already managed to double my collection (math joke alert). 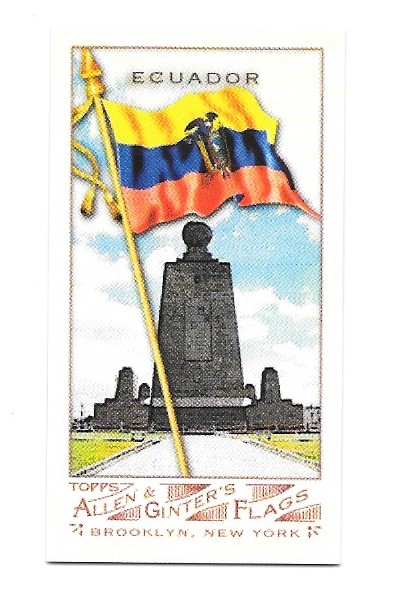 That's the flag of Ecuador - along with what I can only assume is a famous landmark in Ecuador (I'm embarrassed for not knowing what the picture is representing...and I wish Topps had included information about each country on the card back rather than the checklist)!

Since Topps was too lazy to do a proper card back, I had to do some internet sleuthing to figure out what was on the card.

The image is of Mitad Del Mundo City which is enclosed museum park.  The idea of the museum is to commemorate "a Geodesic Mission in 1736 carried out by the French Academy of Sciences, in collaboration with the Spanish government. The objective was to prove the flattening of the poles by measuring the earth at a location near the equator and another meridian in Sweden. (source)"

And so there you go - now you know the rest of the story of the card!