on August 18, 2016
Back in the year 2007, I bought my first pack of a set called Topps' Allen & Ginter.  At that time, I knew nothing about that set...but like many collectors, I was instantly drawn in by the "vintage-like" quality of the card stock..and the simplistic design.  Couple that with a healthy smattering of "odd ball" cards (such as Eiffel Tower and Ken Jennings) and the set became an instant favorite of mine.

All these years later, I'm still happily collecting Allen & Ginter sets.  As you probably know, I bought quite a few boxes (six in total) of this year's edition of the set...and I'm now working hard on acquiring the missing boxloaders, minis, and inserts that I still need (so check out my want list if you have any cards available for trade)!

I am also pleased to say that I eventually went back and bought the entire 2006 Allen & Ginter set (since I missed the set entirely when it was originally released).  And now that I'm going back in time to patch holes in my collection, I've decided to do the same thing with my 2007 set.  You see, back in '07 I was only interested in the base cards...so I sold off any of the minis that I got in order to help pay for the base cards.

Sure, I kind of regret that decision now but it is what it is.  On the other hand, it allows for another fun chase for me beginning now.

And what is that chase?  One of the few mini insert sets in the 2007 A&G edition:  Flags of All Nations. 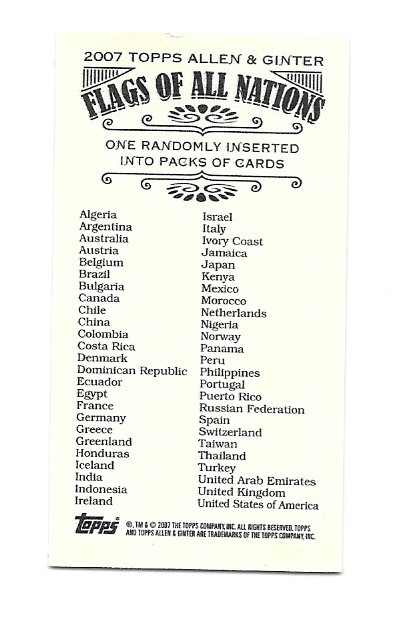 The bad news about this set is that it is 50 cards strong.  The good news is that the set isn't very popular (or valuable) and so cards from the set still pop up from time to time with fairly cheap prices.  I was able to nab my "first" card of the set the other day off of eBay...and so now I'm at 1/50 in terms of set completion! 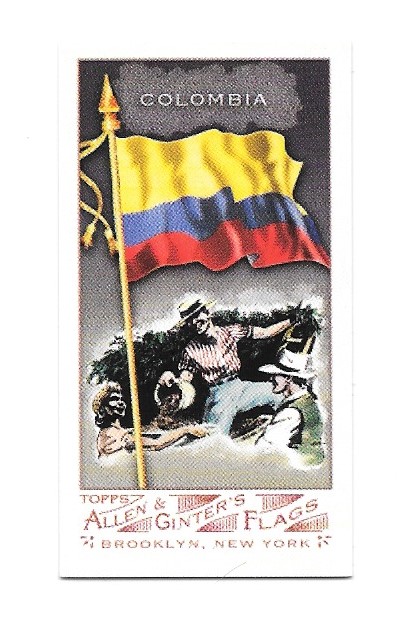 I doubt many people still have any unwanted 2007 Ginter minis lying around, but if by chance you do have some from this set (or any of the other 2007 mini insert sets) let me know!
Allen and Ginter 2007 eBay