Blog Bat Around: My Hardest Set!

on March 24, 2017
A few days ago, I posted a new Blog Bat Around topic.  I figured it had been quite some time since anyone did so (and I figured that many of us, certainly myself) could use a given "prompt" to help take the struggle out of finding a suitable blog topic!

As a reminder, the Blog Bat Around topic this time is:


What is the hardest set that you have ever collected (or tried to collect)?

For myself, I have to "cheat" just a bit and present two sets...each of which offer their own challenges.

Before I get to my two sets, I need to make a few other comments.  First, I did not include any modern base sets, even sets like Topps Heritage with their stupid short prints didn't crack my list (and that's saying something since I'm still working on Heritage base sets from 2014, 2011, 2009, and 2008.  Furthermore, I've sworn off all future Topps Heritage purchases until I knock out at least a couple of those sets.  I definitely wouldn't knock anyone if they claimed Heritage as the hardest set they tried to put together...those things are tough!

I also didn't include a set like 1999 Pacific Aurora - a difficult set to put together because boxes (of pretty much all Pacific sets) are nearly impossible to find and, somehow, it seems no one bothered to open (or at least keep) most Pacific cards.  Nope, that set's tough but it didn't make my list.

Another set that could be on my list is the 2015 Upper Deck Dinosaurs set.  From what I recall, maybe only one or two other bloggers opened any of the product...and that's pretty much it.  I've busted way more than I should have...and I still haven't gotten the base set done (never mind all of the inserts with the tiered short prints).  Ugh.

No, the dinosaurs are tough but they don't make my list.

So what does make my list?  The first set is probably one that you would guess if you've read my blog over the past few years: 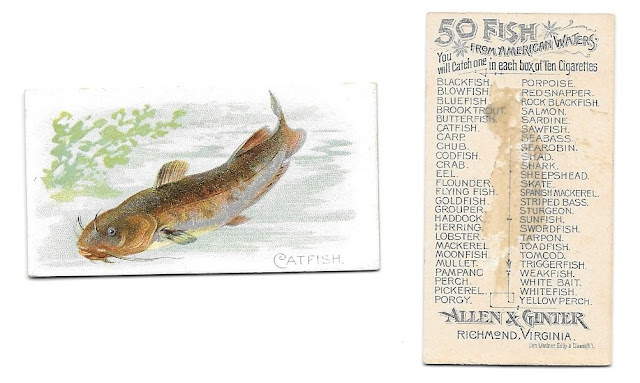 This is an awesome set produced prior to 1900 - so it is no surprise that it's difficult to put together.  I did make life a bit easier for myself by not really caring about the card condition - but even so, I am still missing six of the 50 cards (which, truth be told, isn't bad for such an old set).

My second set that I consider the toughest to complete (and it's another set that I still haven't finished off) is much newer than the fish set.  It's the 2010 Topps Allen & Ginter Framed Relic set. 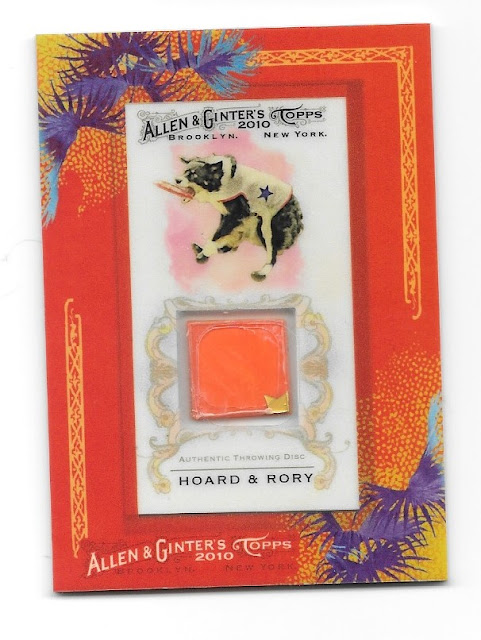 Truth be told, I didn't expect this project to be as difficult as it ended up being - but I guess that's a byproduct of the fact that I'm chasing a relic set that is approaching ten years old...and I don't think the 2010 Ginter set was nearly as well loved as some of the earlier editions either (which doesn't help my cause any since that means fewer relics out there for trade/sale).

I have no idea if I'll ever be able to finish either the relic set or the fish set...but I do know I've enjoyed trying!  I've also enjoyed reading all about your most challenging sets to complete - so keep the entries coming (feel free to leave a link to your article on this blog entry so that I can be sure to find it)!
Blog Bat Around