Do You Collect Error Cards of Your Favorite Player?

on March 11, 2018
Not all that long ago, I won an eBay auction for three 1987 Topps error cards that featured Barry Larkin.  Two of the error cards were the same - and the somewhat commonly known version where Jose Canseco is on the front of the card but the back of the card features (mostly) Barry Larkin's statistics. 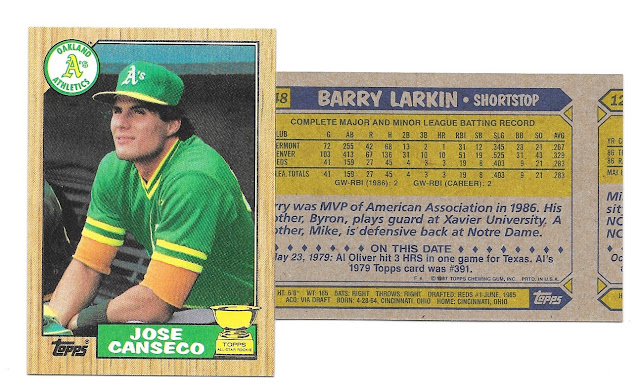 That particular card had been sitting on my Barry Larkin checklist for the longest time...and since the price was right on the eBay auction, I pulled the proverbial trigger and nabbed the error card for myself.

The third card in the lot was also an error card - but this one is the reverse of the other two.  That is, the front of the card features Barry Larkin while the backside has (mostly) Jose Canseco's statistics. 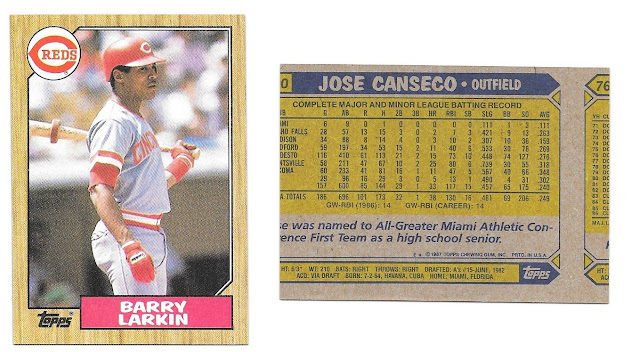 I had actually never heard of nor seen this particular Larkin error card before...and that makes me wonder how many other Larkin error cards are out there - and perhaps more importantly, whether I should count those as separate entries in my Barry Larkin Collection?

Truth be told, the only reason I bought that eBay auction was for the second error card...any time I have a chance to nab a Larkin card that isn't even on my current Barry Larkin checklist, I have to take the opportunity!  For me, I am counting both of these error cards as different entries in my Barry Larkin Collection.  In fact, it probably won't be too much longer before you see both make an appearance in my long running blog series.