on March 16, 2018
This morning, I showed off the highlights from the first three boxes of the break.  Tonight, it's time to take a look at the goodies from the final four boxes included in the group break.

First, let's begin with the remaining box the yielded the most cards - 2002 Fleer Triple Crown. 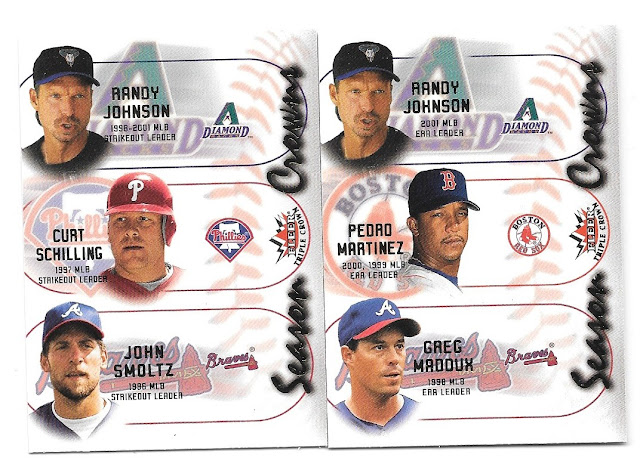 For most of us, this group break was all about the base cards - but that doesn't mean we didn't get any cool inserts or hits out of the break.  In fact, the Triple Crown box was quite nice to us.  For starters, the two Seasons Crowns cards at the top are kind of cool (and those will be randomized between the featured teams).  We also pulled three of the green parallels (all numbered out of the batting average of the player for the previous year). 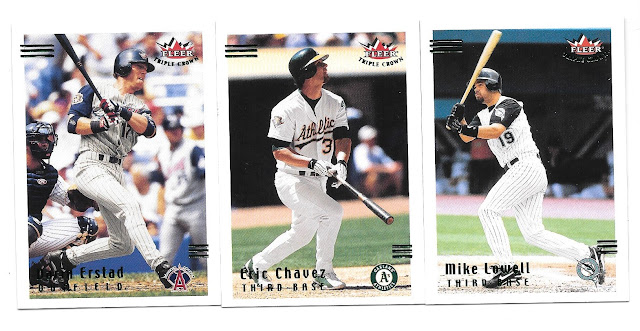 While those are all neat, the biggest score of the box has to be our one promised hit:  a Diamond Immortality relic of Rickey Henderson of the Padres. 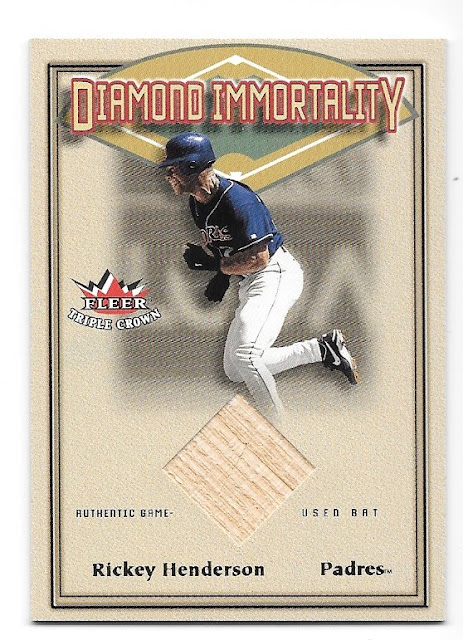 The Diamond Immortality relic cards are seeded a whopping 1:129 packs which makes this a very nice score for the Padres (and by extension, Spiegel83 who ended up with San Diego as his random team).

All in all, I'd say the Fleer Triple Crown box was a worthy inclusion in the group break (not to mention it provided a ton of really nice base cards for all 30 teams).

Next, we have our box of 1998 Topps Gold Label.  I think I was looking forward to this box the most because I still need some of the '98 Gold Label Barry Larkin cards from the set.  Unfortunately for me, I was shut out of Reds' cards entirely (I did get one Twins card which was my random team) but other teams in the break did quite well (especially the Cubs and Indians)! 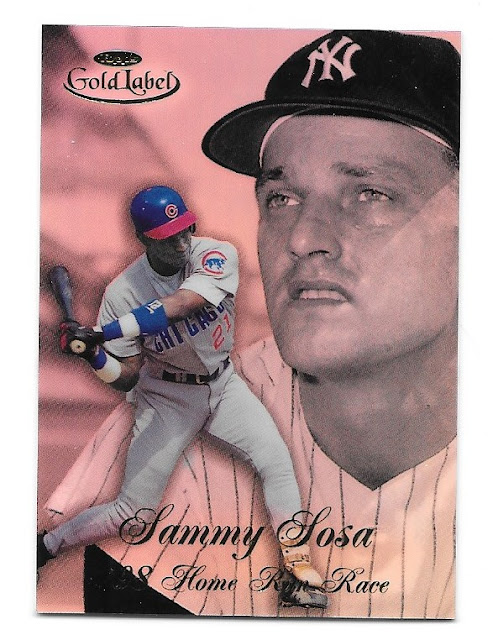 That Sammy Sosa is pretty cool - as are the three Class 2 cards and the one Class 3 (Sosa) card that we found in the box. 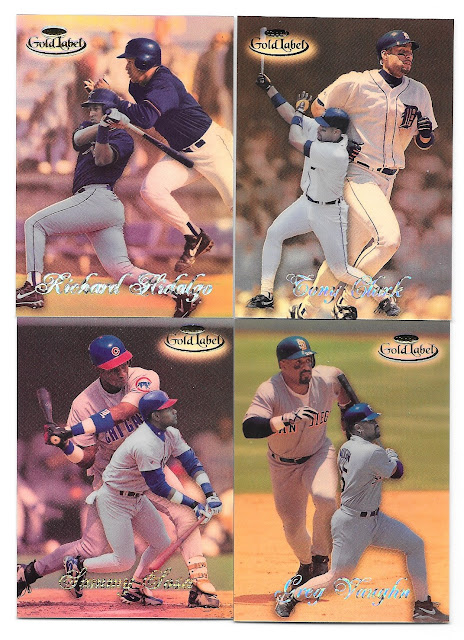 No Larkins this time around for me, but you better believe I'm going to keep a lookout for another box of this set - I love it!

Now we move from a set that I knew I liked (1998 Gold Label) to a set that I had never opened before but ended up liking a lot (2016 Panini Optic).

Since we opened up a retail blaster, we got six of the retail pink parallels.  Based on the names we pulled, I'd say we made out well (especially Bru who had the Astros in the break). 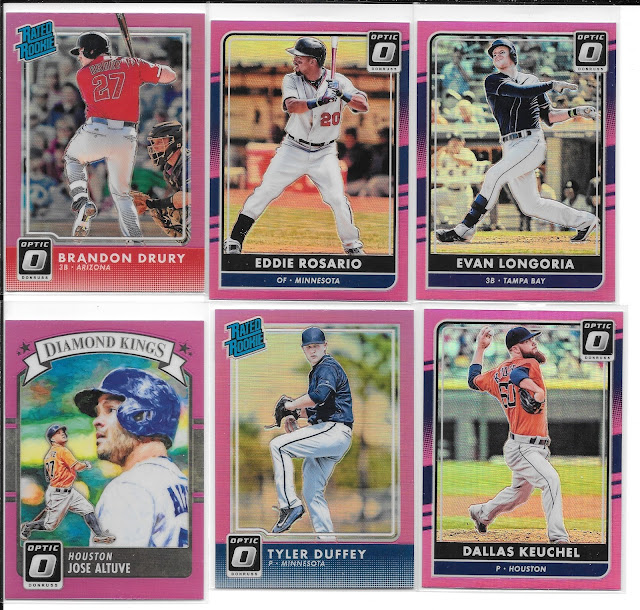 However, the big hit of the blaster was a card that I initially skipped right over thinking that it was a facsimile. 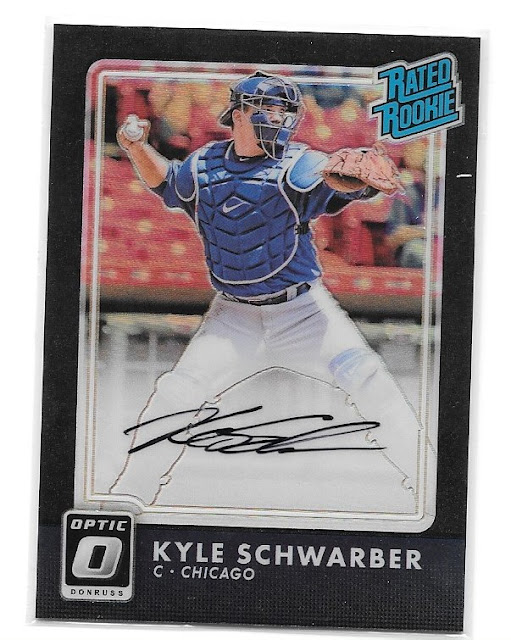 That's a Kyle Shwarbe on-card autograph numbered out of only 25.  More specifically, after a bit of research I believe this is a Rated Rookies Signature Black Parallel autograph.  These things are crazy hard to pull, especially in retail!! 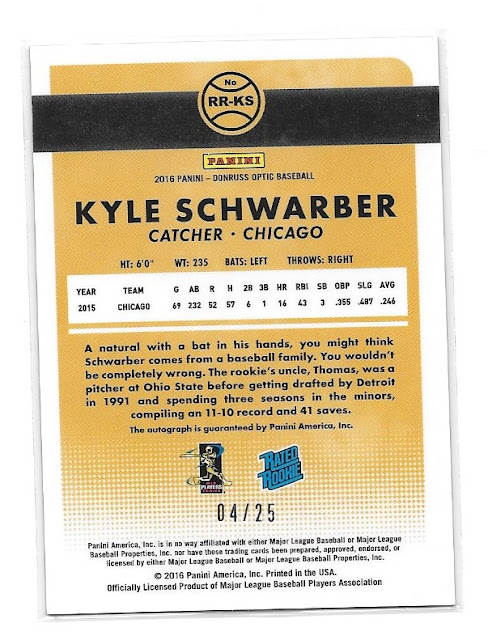 A huge congrats goes out to the Cubs (and Trevor P. who claimed Chicago this time around).  The Cubs were definitely the biggest winners of the group break in my eyes.

And finally, we get to the seventh box of the break - 2017 Topps Gold Label.

This set is broken up into three tiers (named Class 1, Class 2, and Class 3).  I didn't realize it during the video break but there is a small ribbon running down the left-hand side of the card that says what class that particular card is.  Of course, it isn't always easy to read the ribbon (sometimes the background makes it impossible) but it's a good start.  Class 1 cards are the most common and by my count we ended up with 15 of those.  Class 2 is second most common and we had 6 of those.  Finally, Class 3 is the rarest and we only had four of those (Darvish, Arrieta, Strasburg, and Story if my eyes don't lie to me). 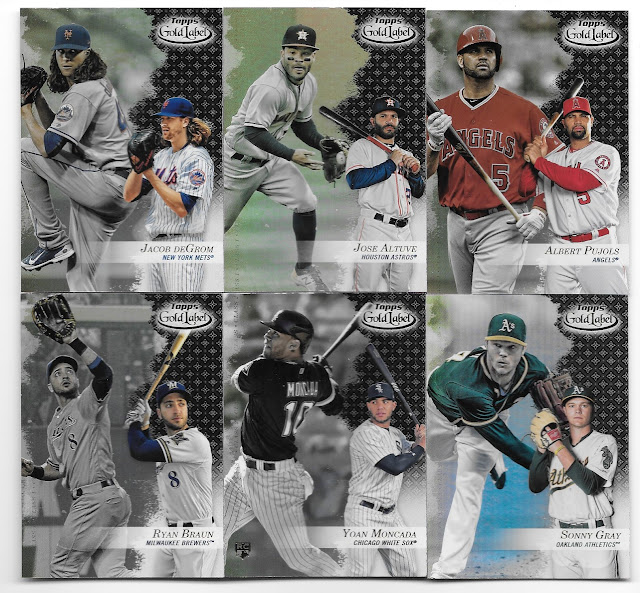 There are also colored parallels with the Black parallels being most common.  Just like with the regular base cards, there are different classes within the parallel sets too.  We pulled a total of six black parallels, four were Class 1 (seeded 1:2 packs), one (Moncada) was Class 2 (seeded 1:6 packs), and we found one (Sonny Gray) Class 3 black parallel (seeded 1:20 packs).

We also found one other colored parallel, a Class 1 blue parallel (seeded 1:11 packs) of Johnny Bench which I like quite a bit. 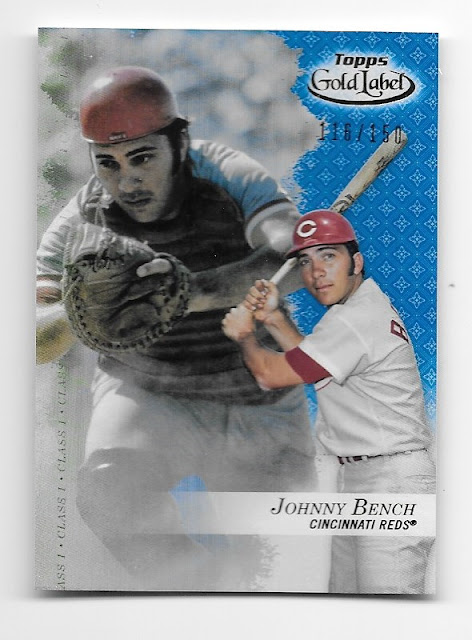 Finally, the last card of the box - and of the group break - was our one promised framed autograph. 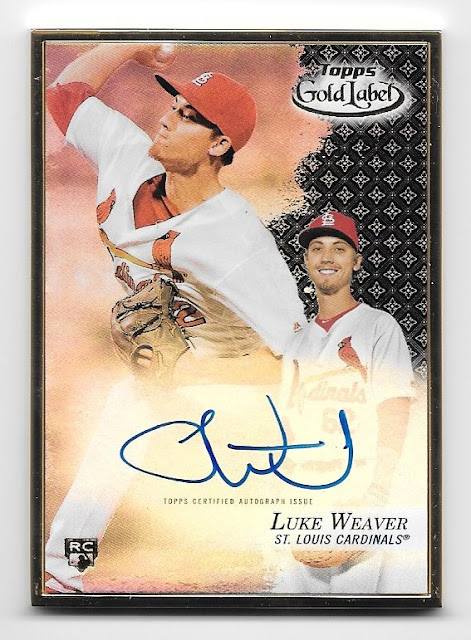 That's a black parallel autograph of Luke Weaver for the Cardinals (madding in the break).  It's numbered out of only 75 and is a super thick framed card which made for a great ending to what I think was a fun break.

I want to thank everyone who participated - whether via actually buying a team slot or just joining in the chat room as I ripped the boxes (having others in the room makes it feel less like I'm just talking to myself for 1.5 hours).

I'm more than willing to do another group break in the future - let me know what sort of product(s) and/or price point and I can try to figure something out.  For now though, I have a ton of packing to do...my goal is to get as many of the cards in the mail as possible before the weekend is over.

PS:  If you want to see the video of the randomization of the multi-team cards, I have that here.  All of the cards were mailed out on Wednesday so they should be arriving soon!
Group Break 2 in 2018