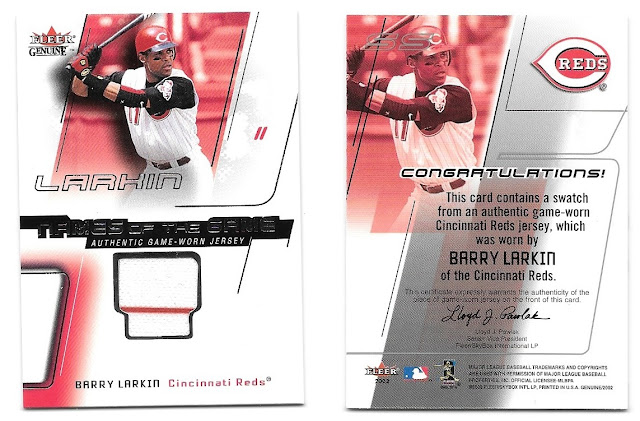 Before I talk about this specific card, it's worth pointing out that this is the 600th entry in my ongoing Barry Larkin Collection series!  Way back when I started this series, I don't think I had any idea that I'd eventually be writing post #600...nor could I have imagined that I'd still have about 200 more Larkin cards waiting for me to write about in future posts!

Returning to the card of the day, this is a nice relic insert with a red stripe from the '02 Fleer Genuine set.  The Names of the Game cards were seeded 1:24 hobby packs so it isn't overly rare (though the set clocks in with 19 players so good luck getting the one you want)!

In addition to the relic, Barry also has a base card in the set (#29) and a Names of the Game (non-relic edition) card (#NG4).  I have the base card which I need to show off in a future post but I don't yet own the regular Names of the Game insert card.  While I am still missing one card from the set, I am appreciative that there were exactly zero parallels in this set - that will make completing the entire Larkin portion much, much easier in the long run!