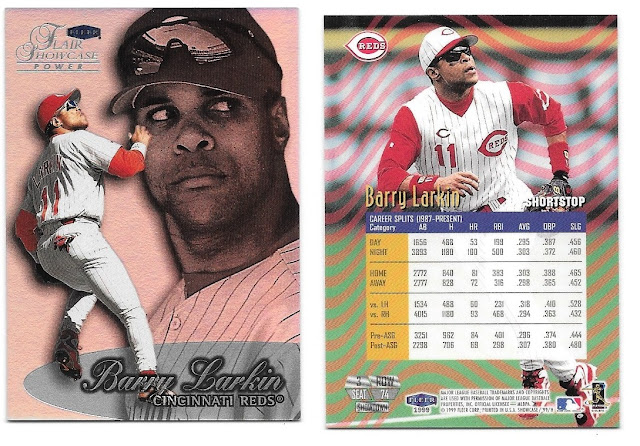 There is  Legacy Collection parallel of every card numbered out of only 88 and a Masterpiece parallel which is a one-of-one.  I have no plans to every track down the 1-of-1 Larkin cards but it would be nice to someday acquire the Masterpiece parallels.  There can't really be more than 88 Larkin collectors out there, can there?  (Don't answer that)

Now that I've figured out what card exactly I have in my hand, I should probably at least comment on the card design.  The front is standard late 90s Fleer fare...which is to say it's clean, crisp, and uninspiring.  The back of the card features some psychedelic wavy stripes for reasons which escape me (and some funky statistical breakdowns) to go along with a third image of Larkin.  All things considered, I kind of like this weird looking set...though I don't care for the confusing set make-up and the plethora of nearly impossible to find parallels.
Barry Larkin Fleer Flair Showcase 1999 Larkin Collection