on July 20, 2018
Last night, I was able to tease everyone with the first pack (and the box topper) out of my first box of 2018 Allen & Ginter.  Well, I also had to tease myself since daddy duties take precedence over baseball cards...but I'm back now and the little guy is (sort of) sleeping - so let's rip some more packs! 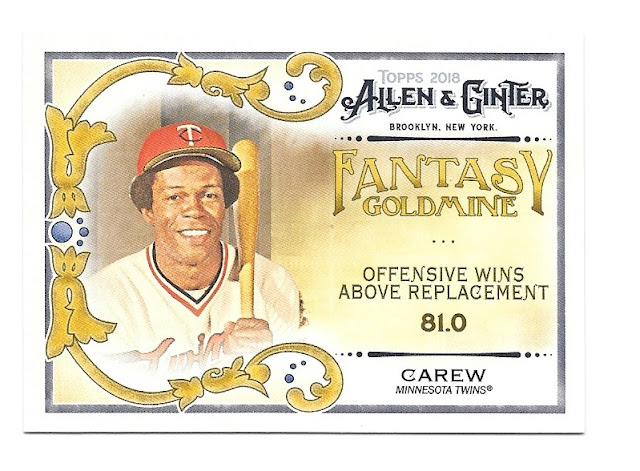 As you can see, I'm not going to scan every single card - that gets silly in a hurry.  I will try to show off the highlight of each pack (at least in my eyes, your mileage may vary on my choices).  I think the winner of the pack here has to be the Rod Carew card celebrating his oWAR of 81.0 over his career. 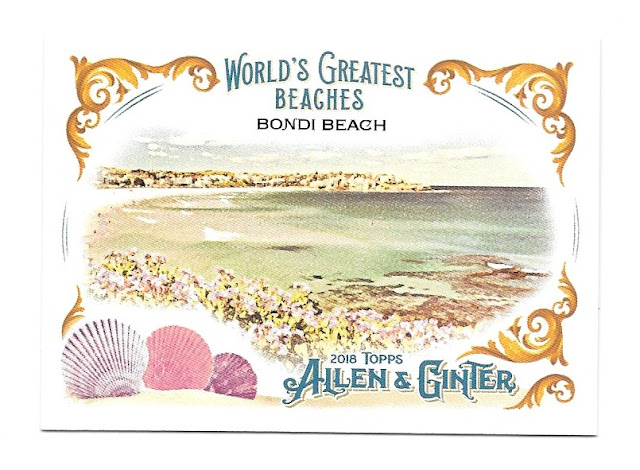 Through three packs, I have found one regular mini, one A&G back mini, and one black bordered mini. Not bad there.  The highlight, however, is the Bondi Beach card - not because I'm a big beach guy (I'm not) but rather because I've actually been to Australia and on Bondi Beach (albeit during their winter months so it wasn't the best beach weather).  Still, it's fun to get a card showing a location that you've visited!

Alright, I'll be honest with this pack...not much to write home about.  I actually like the concept of the World Talent set (it's been done before but that's ok).  The issue is that I don't want to scan any Yankees if I don't have to...Lord knows we'll see all of the Yankees when/if Gint-a-Cuffs comes around since they are usually negative points that require a scan.  I'm not chasing any of the mini parallel sets this year (except for all version of Barry Larkin's base card) so the Doolittle is available.  I will, however, be searching for all the insert sets (full-sized AND mini-sized)! 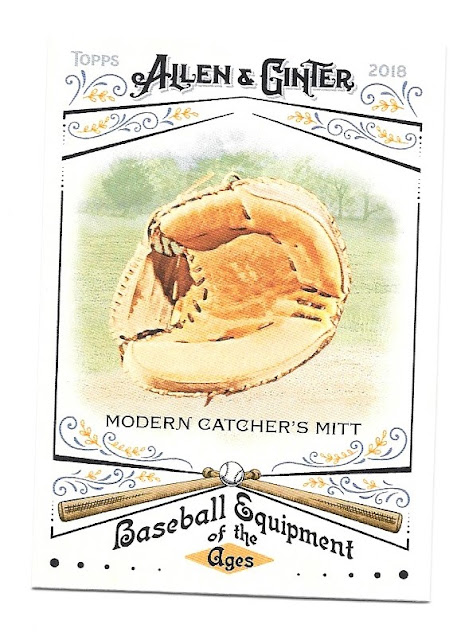 Jeter gets #2 in the set, Jackie gets #42.  Both seem fair to me even though I definitely like one of those guys a lot more than the other (hint, it's not the guy in the New York pinstripes)!  The Baseball Equipment inset set is kind of a neat idea but getting a "modern catcher's mitt" card probably isn't the best representation of the set's core concept.  It's also kind of weird how the mitt is just floating in space in a park somewhere.  Sort of creepy the more you look at it, in fact! 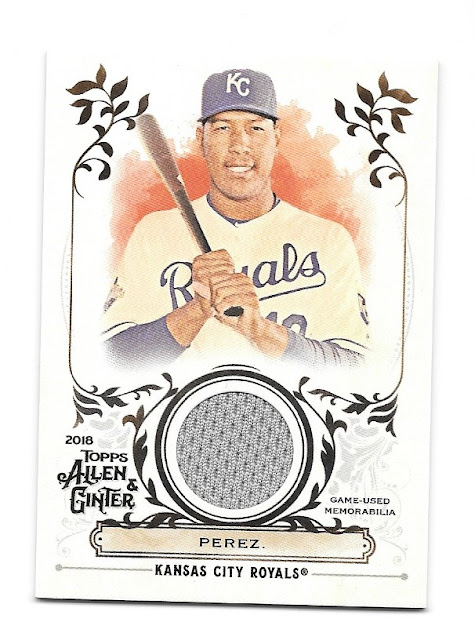 Ruth finished with a WAR of 182.5.  That's crazy high...in fact, he has the highest career WAR of any player and it isn't even close.  The next closest is Barry Bonds who is a whopping 14.5 behind Ruth according to the card back.  The Perez is the first of the three promised hits out of the box.  From my knowledge of Ginter, you can expect two rather boring full sized relics in each box...it's the third hit where you might get something super cool.  Not a lot of Royals fans out but perhaps someone will have interest in this guy.

That does it for the first quarter of the hobby box.  We have found our first hit plus a bunch of nice inserts of the full-sized variety. Still not a single mini insert which doesn't bode well for me actually completing those sets...but I'm going to try so please think of me if you happen to pull any!

I'll have more Ginter as soon as I can...time to go feed the now awake baby!
Allen and Ginter 2018