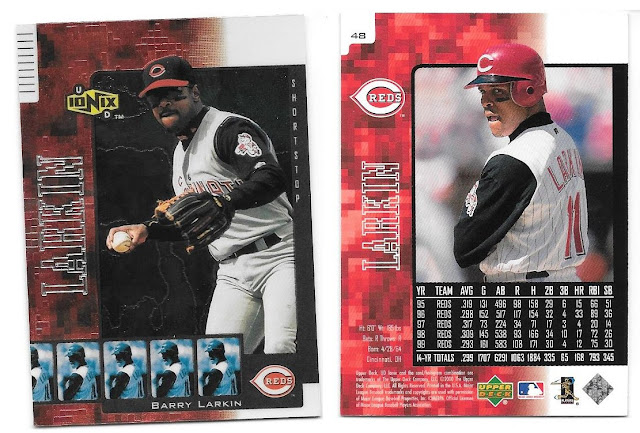 By the year 2000, Upper Deck (along with virtually every other baseball card brand) was pumping out a ton of different products.  For every one that was a success, they probably had three that went down as either failures or simply "unremarkable" in any such way.  For my money, I'd put the 2000 Ionix brand in the "unremarkable" pile for sure.

Unfortunately for me, although I don't find the brand particularly interesting there is at least one more Barry Larkin card from the set that I would like to eventually track down - the Reciprocal parallel (where the front and back images are swapped, hence the name of the parallel).  I may not care for the Ionix brand much, but as a math professor I definitely can appreciate the use of a mathematics term for a parallel set (especially in a way that even makes some sort of sense)!
Barry Larkin Larkin Collection Upper Deck Ionix 2000