on October 06, 2018
It's official - I placed the second order for some more boxes...and they should be arriving any day now!  With that in place, I can officially announce my next group break.

Here's how it will work:

Cost:  Each slot (one team of your choice, one random team) will be $35.00.  The price includes shipping to the US.  Please send payment to paypal.me/nachosgrande and please indicate your chosen team in the comment section when you send payment.  All payments should be sent as goods/services!

When?  The Rockin' Retro group break will begin soon after I sell all of the slots (and all the boxes arrive).  All boxes have already been ordered but I won't reveal each box until I have it in hand (therefore, if you are signing up early you'll get a little bit of a mystery until the boxes are all revealed).

Note #2:  Non-sport cards (if any) will be randomized between all teams.  Cards featuring players from multiple teams will be randomized between the featured team slots.  Cards from historical teams will go to their modern day team.  All cards* from the boxes will ship except for the Fleer Tradition box.    *see note below for the Fleer Tradition box

The bonus prize should make it worthwhile to jump in and claim any team (yes, even the Marlins)!  If you end up doing well, great - and if instead the slot is the worst of the break you get to pick from one of the rather awesome bonus prizes listed above!

So, what's included in the group break?
There will be EIGHT SEVEN total boxes included in the break.  I will update this last with photographs and details as the other boxes arrive in the mail.  Consider this a fun bit of suspense for those that jump in early on the break (remember, only 15 slots in this break)!!

Edit:  I always like to add in a little extra in my group breaks if I can.  While I was originally holding back the eighth box to be a surprise addition, I'm hoping by advertising the bonus box up front that I'll be able to sell out the break! 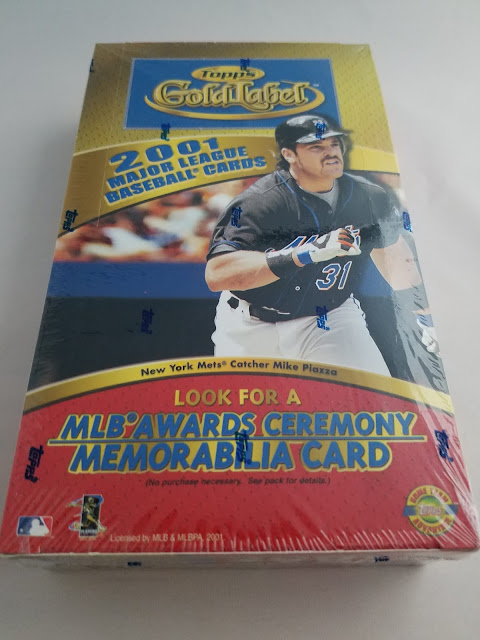 This box has 24 packs with 5 cards per pack.  I have long loved the Gold Label brand so when I had the chance to grab an unopened box of the stuff, you better believe I jumped on the opportunity.  I'll admit, I really REALLY wanted to keep this box all for myself but I think it'll be more loved if it gets included in the group break!  This box does have an outside chance of a relic in it as well, so who knows, maybe we'll get super lucky! 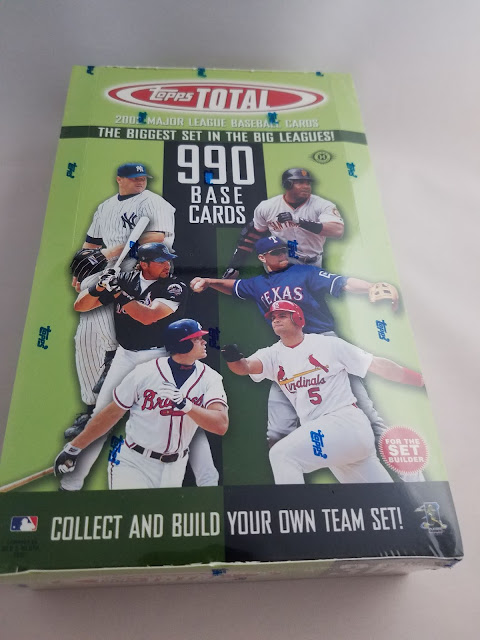 The box proudly proclaims that this is the perfect box for the "set builder."  The box contains 36 packs with 10 cards per pack making this a great group break product as all 30 teams should be well represented here!  This is a hobby box but no other odds are listed on the outside of the box but according to BaseballCardPedia, there are a few inserts included in the set as well. 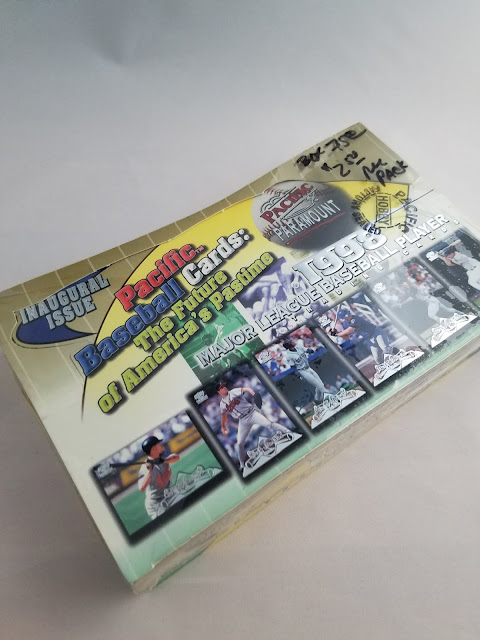 Loyal readers of my blog know that I love late 90s Pacific baseball cards a lot.  Thus, when I (finally) found a box of Pacific for sale, you better believe that I took the opportunity to grab it for a future group break!  This particular box has a number of cool possibilities within it including die-cut team checklists (2:37 packs), Special Delivery die-cuts (1:37 packs), and Fielder's Choice laser-cuts (1:73 packs).  If we get super, duper lucky we might even find a Cooperstown Bound card (1:361 packs).  Those all go along with three different parallel sets including the hobby only silver, platinum blue, and hobby copper (the final one being one-per-pack).  The box says that there are 36 packs within but there is no mention that I can find of how many cards per pack. 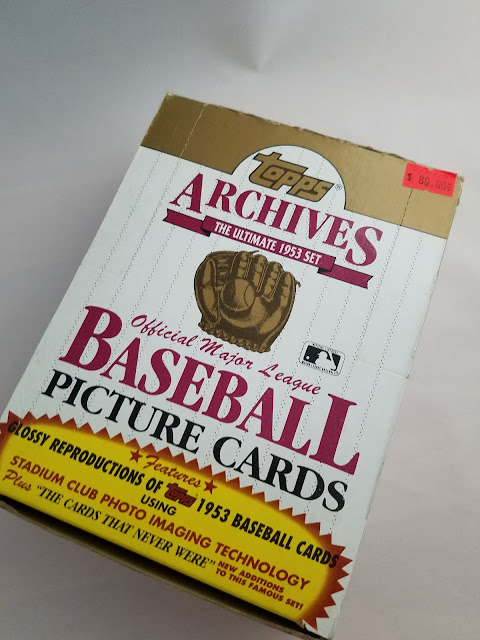 Honestly, I have no idea what to expect with this box - but there are 36 packs inside with 12 cards per pack making this another huge box in terms of card output!  The box I bought was supposed to be brand new but it did arrive without a cellophane wrapping on the outside (all of the individual packs are still wrapped but I thought that was worth mentioning at least). 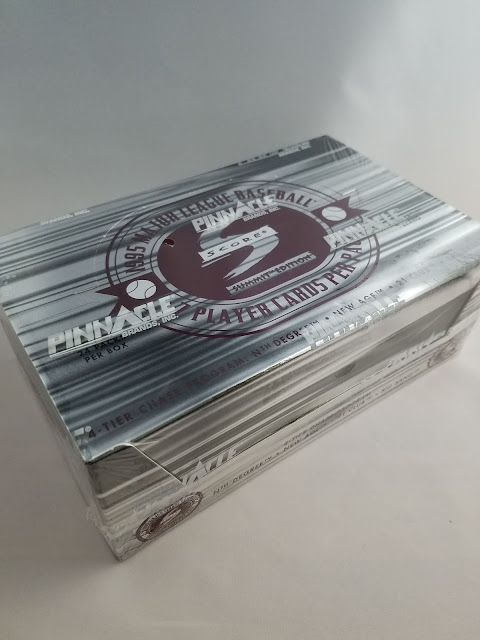 The '95 Score Summit Edition is a higher end version of Score's base set.  The box contains 24 packs.  Inside, we can hope to find a few different inserts or parallels including Nth Degree, New Age, 21 Club, and Big Bang. 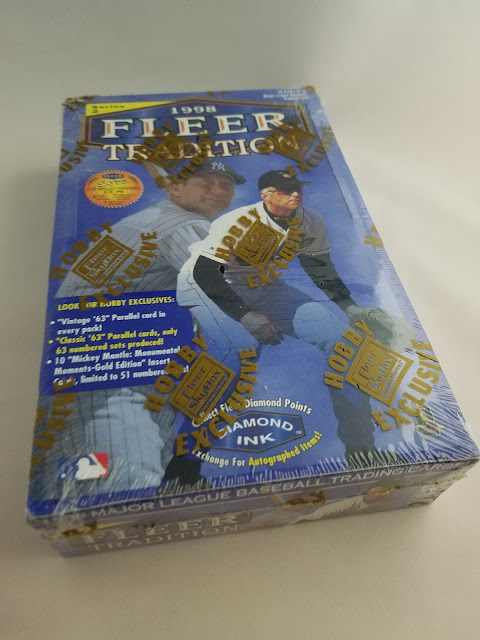 This is another hobby box - and it's of a set that I collect.  In fact, that's the reason I added this box to the group break.  Important:  I will be keeping any cards from this box that I still need for my own set (you can view my entire want list here).  I have most of Series 2 already but I am hopeful that this box will get me closer to completion for my own set. 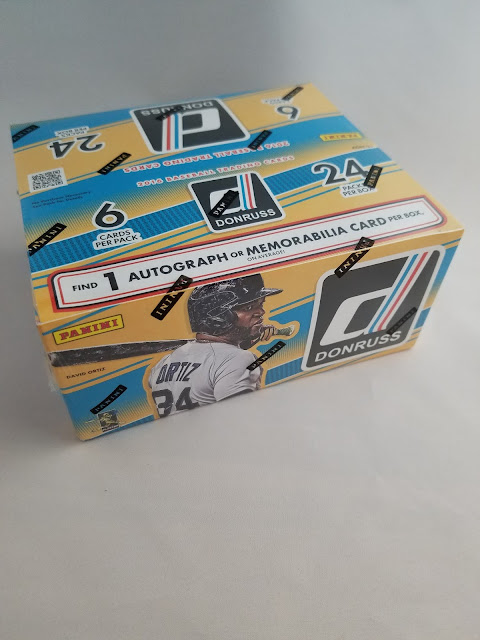 Finally, to end our original group of promised boxes how about a box with a relic or autograph?  With 24 packs and 6 cards per pack, the Donruss box should provide a nice mix of newer players to go with our retro boxes! 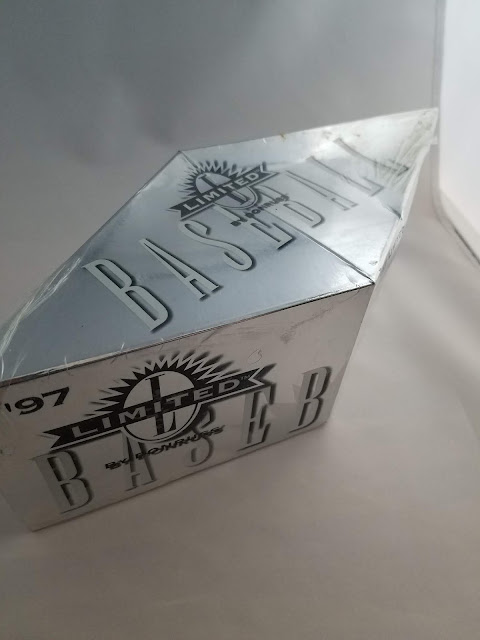 Like many of the boxes in this break, I am SUPER excited to bust this box.  First of all, look at the nice parallelogram shape that the box is in!  Second, the 1997 Limited set is said to be super rare - only 1100 of each Star Factor subset base card were ever produced (according to the box).  I didn't know much about this set until I saw it on baseballcardpedia - and if you are curious, I'd definitely check out that site.  The only bad thing about the set is that there will be a bunch of cards featuring multiple teams.  That's ok though, at the end I'll simply randomize the cards between the claimed teams.  PLEASE NOTE:  If a card features two teams but one of those teams was an originally claimed team and the other was a random team, the card will go in the claimed team's stack.  In this way, everyone has a better shot at getting the cards from the team that they actually claimed and want!  I think this is the fairest way to do things for this particular box (my standard rules for team randomization for the other boxes will hold as in the original rules for the break)  The special tie-breaker rule is only for this particular bonus box.  If a card features multiple teams that were claimed (or if all the teams featured were the second randomized team) then I will simply random off the card between the various teams as usual.  As for the box itself, there are 24 packs within it according to the box (but no card count per pack is mentioned, at least as far as I could see).

That officially does it for the group break - so let's get this thing filled (and paid for) ASAP so that I can start busting the various boxes.  With EIGHT different boxes included, this should go down as a great value group break despite the $35 per slot cost.