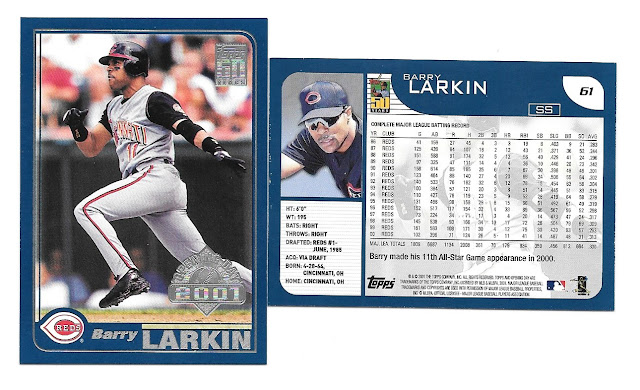 The Topps Opening Day line was never one of my favorites.  Even as a kid, I deemed the brand inferior in pretty much all ways to the flagship Topps set.  That said, 2001 was one of the rare years where I think I actually preferred the Opening Day set.  For the most part, Larkin's flagship card and Opening Day card are basically the same - the only real difference is the foil stamp for the brand in question.  The reason that I prefer Opening Day in '01 is the border color.  I definitely prefer the dark purple-blue to the sort of swampy green that the flagship set used.

Other than the border color, there isn't much to remark on with this particular Larkin card - especially since I already gave my comments on the base set design in the flagship card post.  Instead, let's take a quick look at the 2001 Opening Day set as whole.  The base set (retail only) was 165 cards in size and then there were two insert sets of sorts.  The first was simply team logo stickers (30, one for each team).  The other insert set was a collection of four different subjects in an autograph set.  The humorous part about the autographs are the astronomical odds to actually pull one of the signatures:

Yeah, good luck with that.  Who did Topps think they were kidding?  I imagine they wanted to simply be able to plaster "find autographs" on the retail boxes that they were marketing to kids.  Of course, virtually no kid would ever actually find a signature with those odds...  It's not hard to imagine that basically false proclamations like that ended up turning more people off to the hobby than it did turn people on to card collecting.
Barry Larkin Larkin Collection Topps Opening Day 2001