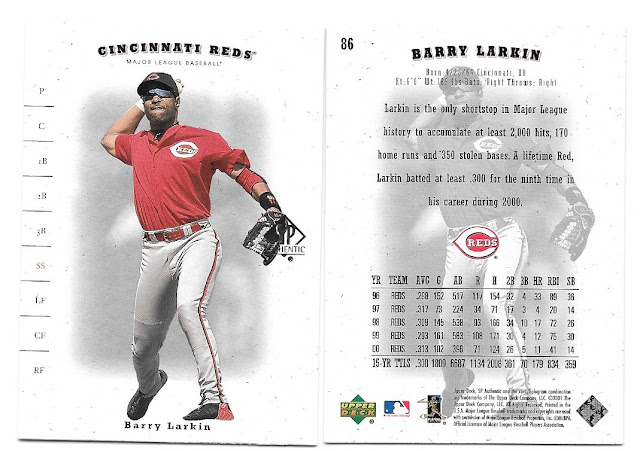 Here we go again, another pointless set from Upper Deck in 2001.  This is yet another example of the laziness and dumb designs that Upper Deck showcased throughout most of their offerings that year.  For SP Authentic, we get the same photo on the front and back of the card (lazy) as well as one of the dumbest design gimmicks that I can remember seeing in the "position growth chart" along the front left side of the card (stupid).  If that weren't all bad enough, there is a parallel of the base set as well that is numbered out of 50 (of which I don't yet own Larkin's card).  I hate the fact that I feel compelled to track down another card from a set that I definitely don't care for - but that's the life of a player collector I suppose.  At least this card is now scanned and tucked away in my Larkin Collection binder so that I don't have to look at it nearly as often as compared to when it was sitting on my desk waiting to be written about.  Small victories.
Barry Larkin Larkin Collection Upper Deck SP Authentic 2001