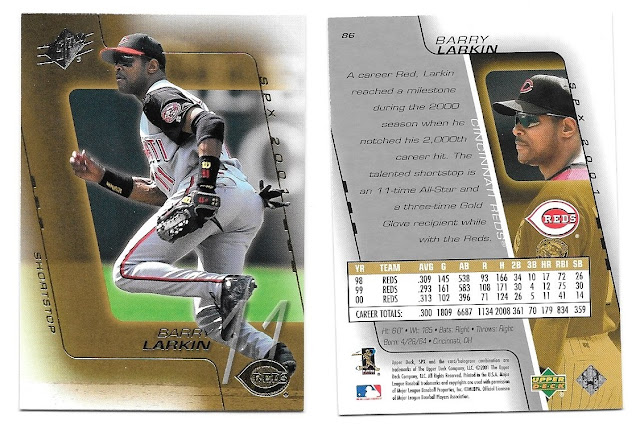 The 2001 Upper Deck SPx set is a strange set with a number of different tiers in it.  Luckily for me, I'm only interested in the Barry Larkin cards in the set which means I only need to find two different cards - the base card you see above which I obviously already own and the parallel of the card (called Spectrum and numbered out of 50) which I don't yet own.

For whatever reason, it sure seems like Upper Deck wasn't as enamored with Larkin as some other brands since Barry rarely seemed to make it into Upper Deck insert sets after the year 2000.  That's just as well though because Upper Deck cranked out way too many sets (most of which are too boring for me to even consider looking into let alone collecting).  That said, I admit that I kind of like the design of the 2001 SPx set.  There's angled lines, strange colors (not team friendly), and too much foil and yet I still kind of dig it.  What can I say, sometimes you can't explain art? (or at least baseball cards)
Barry Larkin Larkin Collection Upper Deck SPx 2001