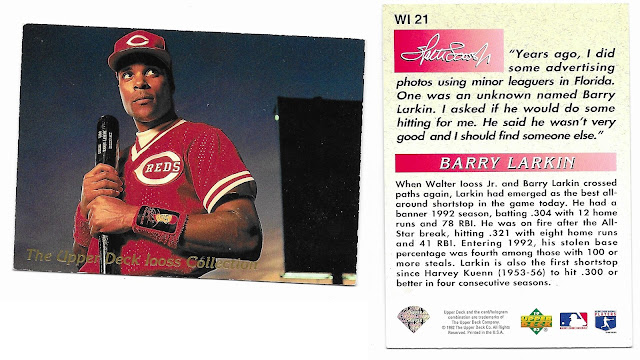 One of the neat things about being a player collector is that I get to dabble in many, many sets that I otherwise would have ignored.  The Walter Iooss insert set is one such set despite it being seeded in 1993 Upper Deck (which was a set that I bought some of as a kid).  I'm guessing I never saw a single card from this set since it was seeded in Series 1 hobby packs and Series 1 retail foil packs, neither of which I probably bought as a kid (I know I didn't buy a hobby pack since there wasn't a hobby shop anywhere near me).

Anyhow, the gimmick of the Walter Iooss set is that each team got one player in the set and that player was supposed to be photographed in a "candid" setting.  I'm not sure that Larkin's photo is all that candid, unless he holds his bats a little too lovingly all the time.  That said, it's still a kind of cool card and it definitely is a unique shot of Larkin for my collection.

I also have to make mention of the quote on the back of the card, who knew Larkin was so humble in the minor leagues?  Only a few years later, Larkin would be rocking a wristband with his own (cartoon) image on it.  How times change.
Barry Larkin Larkin Collection Upper Deck 1993