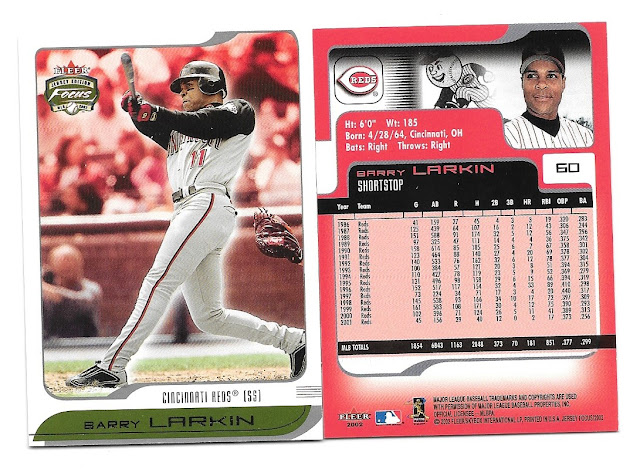 The "JE" in the set's title stands for Jersey Edition though this card doesn't contain any bits of fabric.  I actually like the design of the set quite a bit, mostly due to the Mr. Redlegs in the background on the backside of the card!  With lots of statistics and a pair of decent photographs, this is one of the better designs from 2002 Fleer if you ask me.

As for Barry Larkin cards in the set, he has two parallels of this base card - a Jersey parallel (#/11) and a Century parallel (#/111).  Unfortunately, for a set that goes by the name "Jersey Edition", Barry didn't actually get a relic card in the set.  I have no plans to actually go after the entire base set but I wouldn't be opposed to eventually trying to track down at least the Century parallel (I generally avoid trying to acquire any cards that are numbered below 25 as they are often out of my budget and/or impossible to find).
Barry Larkin Fleer Focus JE 2002 Larkin Collection