on August 15, 2019
This morning I had the opportunity to attend the Little League World Series Grand Slam Breakfast in Williamsport, PA.  My college that I work at was one of the (many) sponsors of the event and so I was lucky enough to nab a pair of tickets - one for me and one for my father.

The highlight of the breakfast was, of course, getting to hear from retired legend Randy Johnson.  Randy was definitely a quiet guy, not necessarily what I was expecting given how I remember his playing days?  I mean, remember when he scared John Kruk so much that Kruk turned around to bat from the other batting box?

Of course, during the Q&A that followed breakfast, Randy had to answer a bunch of questions about the bird that he once killed with a pitch.  He took it all in stride though saying that's the one question he gets asked about no matter what event he's doing.  According to the host of the event, the Google search Randy Johnson and bird is more popular than Randy Johnson and baseball.

In the end, Randy took a few minutes to sign some autographs.  For once, I had planned ahead and brought along a couple of nice Allen & Ginter cards for him to sign.  Unfortunately for me, the rule was one signature on one item only so I ended up giving my extra card to a lady behind me in line who was otherwise going to have Randy sign her program.  I think getting a signed Ginter card is way better than a paper program filled with ads from local vendors. 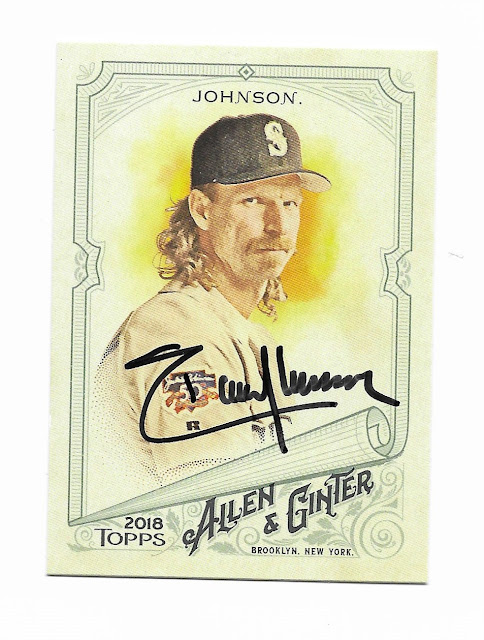 I have to give Randy lots of credit for a great looking signature - and for being an all-around nice guy during the entire breakfast.

The signed card will eventually be part of one of my new "man cave" displays that I'm slowly working on.  I have one of those wall hangings that holds 20 baseball cards and my goal is to eventually accumulate 20 Allen & Ginter on-card signatures to fill the display (on base cards, not the official framed signatures that come in packs).  I believe Randy is now my fourth such autograph for the display so I still have quite a ways to go!
Grand Slam Breakfast Little League World Series Randy Johnson