on August 23, 2019
One of the things that I learned a month or so ago from my (Even) Better Know a Blogger series is that a lot of my readers share my interest in games of all types.  Back in 2017, I did four game reviews over the span of four consecutive Fridays that were all quite popular (by my standards) but then I never wrote another game review since that time!  Well, while I won't make any promises that this will become an "every single Friday" feature, I do hope to continue to share my love of all things games on my blog a bit more frequently.

To ease us back into the game scene, let's take a look at what is quite honestly one of the best small box games I've ever played:  Skull.

Skull is incredibly simple to play.  The basic idea is that you are given three cards with flowers on them and a fourth card with a skull on it.  You keep your hand of cards hidden from your opponents (but every player starts with the exact same hand configuration).  One at a time while going around the table, players (secretly) pick a card from their hand and place it face down in front of them on the table. 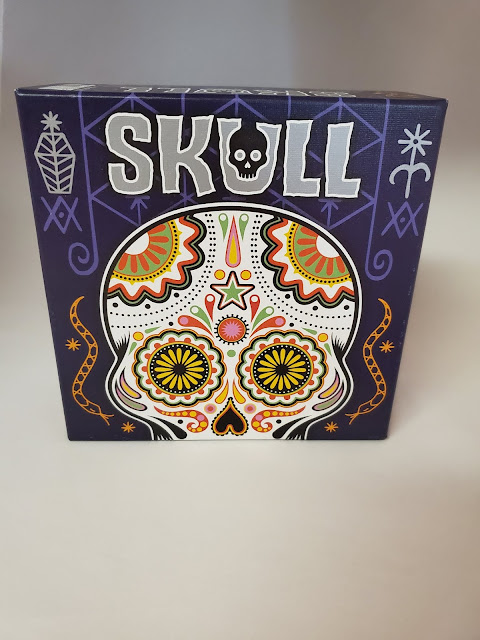 Once each player has placed a single card down, the first player has a choice.  Either they place a second card on top of the card they already played (also face down) OR they start the bidding.  If the first player places a card, then the next player gets the same choice - place another card on their stack or start the bidding.  Play continues in that manner until either someone chooses to make a bid OR someone is forced to make a bid because they cannot place another card down on their stack.

Bidding works as follows:  The first player to bid says a number.  The number they say is the number of cards that they will need to flip over without flipping over a single skull (i.e. a bid of 4 means the player thinks s/he can flip over four flowers without flipping over a single skull).  Bidding continues around the table with subsequent players being allowed to bid higher than the previous number.  Bidding ends when everyone passes except the high bidder. 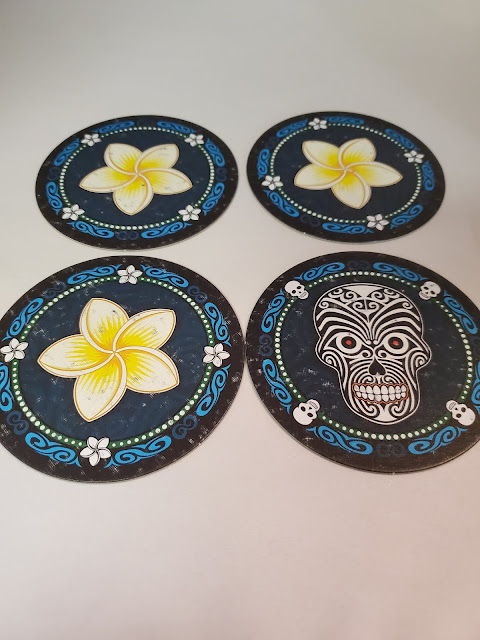 The high bidder MUST start by flipping over all of their cards prior to flipping over any cards from the other players at the table.  Therefore, if you bid 4 but you put your skull card down in your own pile, you know that there's no way you can successfully make your bid.  You have to hope that your bluff works and that one of your opponents bids higher and then thinks your stack of cards will be safe to flip over!

If you DO make your bid, you get one point.  The first player to two points wins the game.

If you DON'T make your bid, you lose a card from your hand for the rest of the game.  If you end up with no cards in hand, you are out of the game.

Since the game only goes to two points, there's a surprising amount of excitement built in immediately upon starting the game.  Even better, it seems almost without fail that someone will make a bid of N (where N is some positive integer) and then flip over the first N-1 cards safely and easily.  The drama of whether they can also correctly select that final card and earn the point is always good for screams at the table (either from the bidder or from everyone else).  No matter what happens, laughter is almost always going to occur which makes this a perfect little game to play with anyone!

It should be noted that the official game comes with beautiful "coasters" which is what I own.  However, you can play the game with something as simple as a deck of cards - let numbers represent flowers and face cards represent skulls.  In that way, you can actually play huge games of Skull.  I did that in my Mathematics of Games and Gambling course with my first-year students at college and they all seemed to greatly enjoy the game. 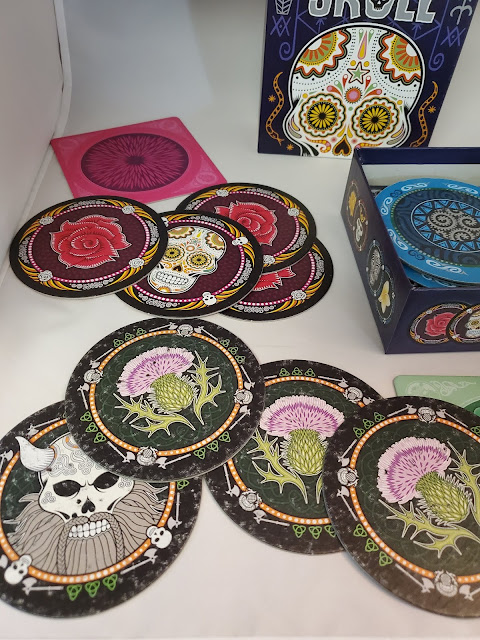 Like I said above, you can play Skull with a deck of cards and save your money BUT I have to admit that I love the actual retail game.  The coasters are incredibly satisfying to hold, lay down, as well as flip over and the various colors/designs make the game pop on the table.  I also like the large square coaster - basically a playmat that doubles as your score pad.  If the color side is showing you have one point (remember you only play to two), if the dark side is showing then you have zero points.  In that way, you can look around the table and immediately see who is a threat to go out and win the game.

I feel safe in saying that this game is an instant buy recommendation from me.  It's small, easy-to-learn, and fun while also offering a good amount of replayability.  The game is definitely worthy of a 100/100 rating, something I rarely give out (in fact, this is the first 100/100 in my Friday Game Review series)!

*Editor's note:  You may have noticed the Amazon.com link at the top of this post.  If you click on that link and buy this game (or any other Amazon purchase), Amazon will pay me a very small amount of money.  However, if enough people do that enough times, I'll eventually earn some cash that I can then use to buy even more games to review here!  I call it a win-win and I'd greatly appreciate it if you clicked through my blog anytime you want to buy something off of Amazon!  Many thanks.
Friday Game Review Game Review Nachos Grande Review Skull