on September 06, 2019
A couple of weeks ago, a representative from SportCards.com reached out to me with a nice email saying that they'd like to offer me the chance to receive one of their collector boxes of cards for free.  Prior to the email, I had never heard of SportsCards.com but I'm not one to turn down free cards so of course I jumped at the opportunity.

At this point in the post, I should note upfront that the company offered me the free box without asking for anything in return.  I did tell them that I'd be happy to do a review on my blog (which they said they would appreciate) but other than the free box no payment exchanged hands.  Thus, all of the thoughts you read below are my pure, unfiltered thoughts and as you'll see I have both good and not-so-good things to say about the product.  For anyone else out there reading this review, I'm more than happy to review products relevant to the blog but only if I can give my honest assessment.

With that disclaimer out of the way, let's get to the good stuff!

A few days later, a large padded envelope showed up in my mailbox with a nice, sturdy white cardboard box inside - my very own Collector's Subscription Box! 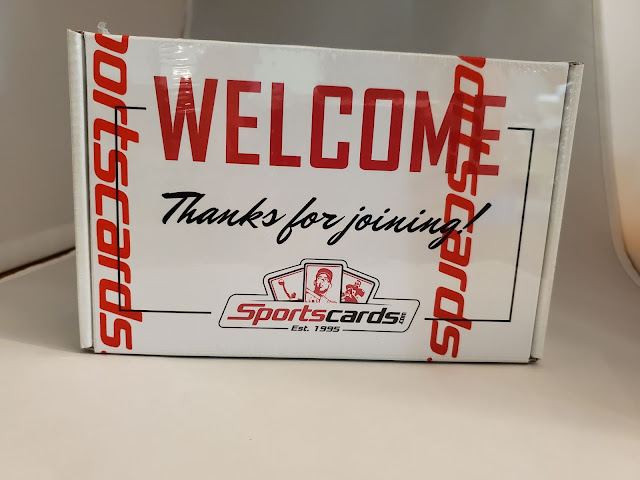 I wasn't sure exactly what SportsCards was going to send me - the email offer simply said that I'd be getting one of their collector boxes.  As it turned out, I believe they sent me a Bronze Collector Box which according to their web page will contain:


There is a bit of confusion on my end knowing if I actually received a Bronze box or something else but I'll get to that in a moment.  First, let's take a look at the contents of the box.

All of the box's contents were securely wrapped in tissue paper and "sealed" shut with a nice SportsCards.com sticker.  I have to say that the shipping and packing was top notch and the opening experience certainly felt special to me.

So what was in my box?  Well, it turned out I received one of SportsCards.com's "All Sport" boxes because my box had a mix of both baseball, football, and basketball.  The football component was made up of an unopened pack of 2019 Leaf Draft football. 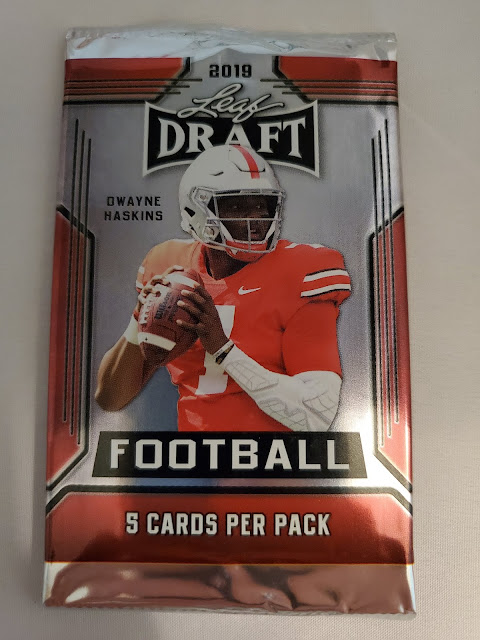 The pack had 5 cards in it.  Despite me not being a football collector, I felt it was important to open up the pack as part of the review of the entire product so I eagerly ripped into a product that I'd truly never buy on my own. 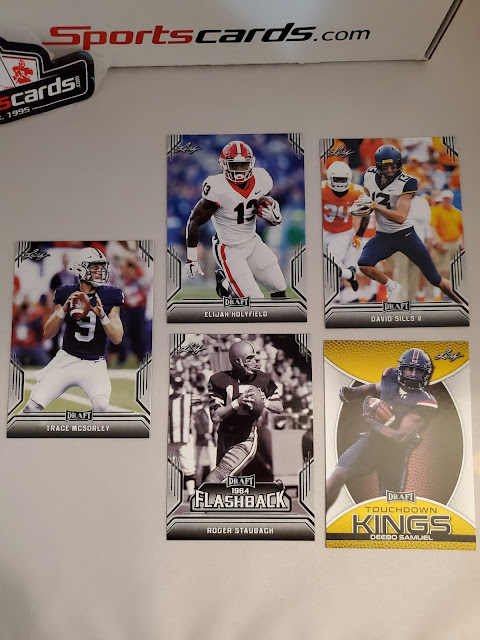 The contents of my pack were actually better for me than I was expecting - that Trace McSorley card is actually going to be a keeper for me (I'm a big Penn State football fan)!  In fact, for my personal collecting tastes that McSorley was probably the best card of the box!

The basketball component of the box was taken up by the promised game-used card. 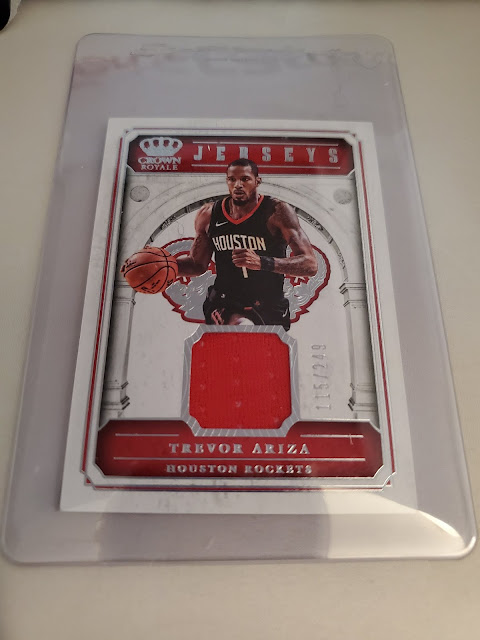 That's a Trevor Ariza Crown Royal jersey card numbered 115/249.  I don't watch professional basketball at all so I couldn't tell you the first thing about Ariza.  I can, however, judge the card design and on that front at least I approve.  The red bit of cloth is certainly a refreshing change of pace from the usual white or gray bits in most relics and the Crown Royale design is shiny without being overbearing (not something you'd probably say about the original Pacific version of Crown Royale)!

The final three items in the box were all of the baseball variety and therefore of the most immediate interest to me.

We'll start with the most mysterious item. 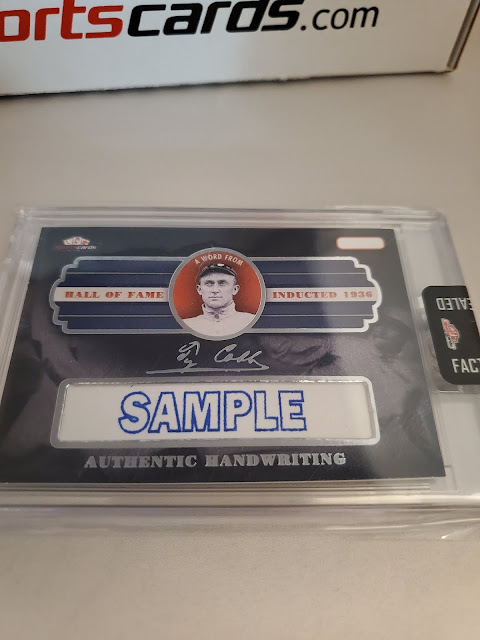 From what I've been able to discern, this is actually nothing more than an advertisement card for the 2019 SportsCards.com "A Word From" relic set which uses letters written by Ty Cobb. 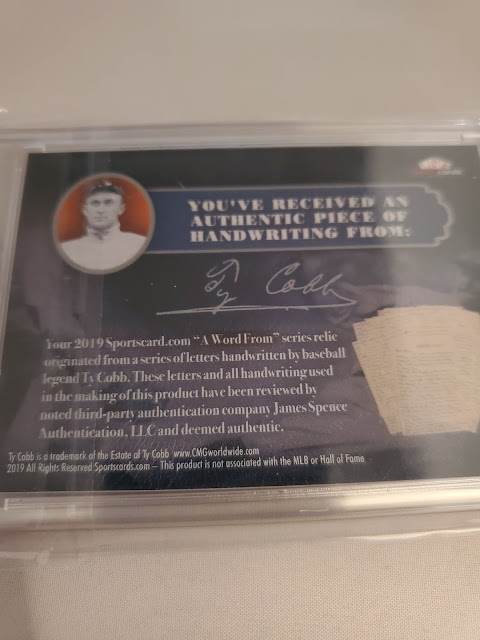 The company got me to really study the card though because it came shipped in a magnetic case and team bag along with a "factory sealed" sticker on the outside of the case.  Powerful advertising but ultimately not a card of particular interest to me!

At this point, if you are keeping track we've seen our promised game used card and our promised unopened pack.  At first, I wasn't sure if that Ty Cobb ad card counted as my Mystery Item but it turned out that I actually did receive a different "mystery item." 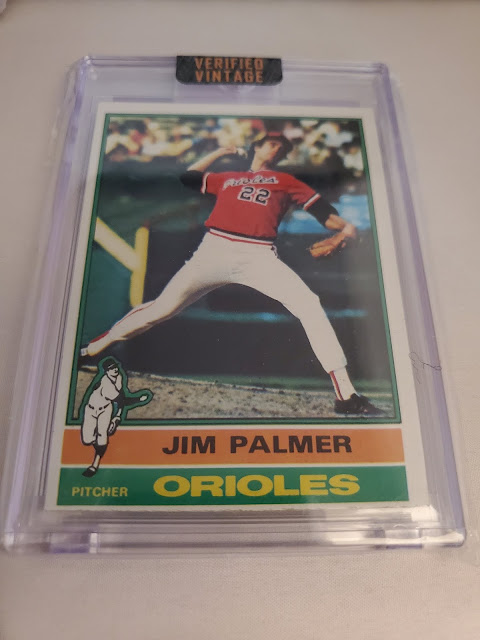 That's a nice 1976 Jim Palmer card, once again shipped in a magnetic case and this time sealed with a "Verified Vintage" sticker.  The card appears to be in fairly good condition, though it is a bit off-centered as you can tell from the scan.  Still, it's a solid mystery item inclusion.

The final item of the box was the promised autograph, though I don't think that it's actually a "pack certified" auto. 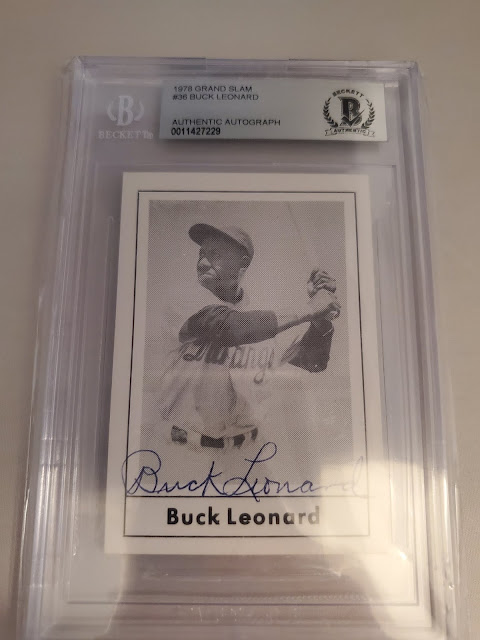 I have to say, that's a pretty cool autograph to get in a box.  To me, it looks like a TTM (through the mail) autograph with a ballpoint pen but even so, it's a nice card.  The fact that Beckett certified the autograph is good I guess, but who knows how trustworthy grading companies are these days anyhow.  This card is also why I'm not 100% certain my box was supposed to be a Bronze Collector's box since I don't think that autograph is actually pack certified.

And that's the box.

According to the web page, a Bronze Collector's box subscription can be yours for $29.00 a month.  There's also a pair of higher tiers (the not-so-creatively named Silver tier for $49 a month and a Gold tier for $99 a month).  Based on the stated box contents, it's actually the Silver tier that seems to offer the best value for your dollar (though I couldn't find any mention of whether the "quality" of each hit increases by tier or if only the "quantity" of stuff increases).  Assuming all tiers have the same sorts of cards and packs, if I had to buy a box subscription for myself it'd definitely be the silver tier.

Of course, for me if I were to buy a box it'd be the baseball only version.  I didn't get a choice from the company as to what box they were sending me - but had they sent me a baseball only version there's a decent chance I would have liked the end result a lot more.  For the box that I did get, I really only ended up with a single sure keeper card (the McSorley card) and a second card that I liked a lot though may be willing to trade (the Buck Leonard autograph).  The vintage Jim Palmer was certainly a nice bonus item but the basketball hit did nothing for me.  With such a small amount of items in a box, having two of the main items (relic and pack) be non-baseball was a bummer for me and my collecting interests.

As with any card product, I find myself comparing what I got with the SportsCards.com box with what I could get for a similar amount of money in retail blasters or packs.  In this case, the box I got was worth about $30 or 1.5 standard baseball blasters.  If you are seeking hits, then the SportsCards.com box is definitely better since you get an autograph and a relic guaranteed.  In my case, I even ended up with a pretty nice auto of a Hall of Famer, something I'd be highly unlikely to find in a retail blaster.  I also like the fact that you get an unopened pack, after all, opening packs is one of the best parts of collecting cards!  Ostensibly, your unopened pack could hold another hit which would obviously make for an even stronger box.

It's hard to give this product a final score or grade since the box I received isn't exactly something that is in my wheelhouse.  I'm basically a baseball-only* collector.  *not counting my vintage A&G cards.  I'd kind of like to try one of the baseball only boxes to see if it feels like a better value (and more fun to open) but for the all-sport box I can honestly say that I wouldn't order one for myself.  Again, that's more a reflection of my collecting interests than it is a reflection of the box's contents.

One more thing to note.  In addition to the collectors boxes, SportsCards.com is also offering a free One Year VIP Membership right now which gives you access to the BCS database, save searches, see price trends, etc.  If nothing else, no harm in signing up for the VIP membership (which is what I did already)!  The site also offers some other non-subscription boxes including a case of boxes that sells for over $1000.