Another Relic for the Collection: An Authentic Worn Hat Piece

on January 27, 2020
I went a long time without making any meaningful progress on my 2010 Topps Allen & Ginter want list and then Bam!  In the past couple of weeks I've acquired two brand new relics for my set! 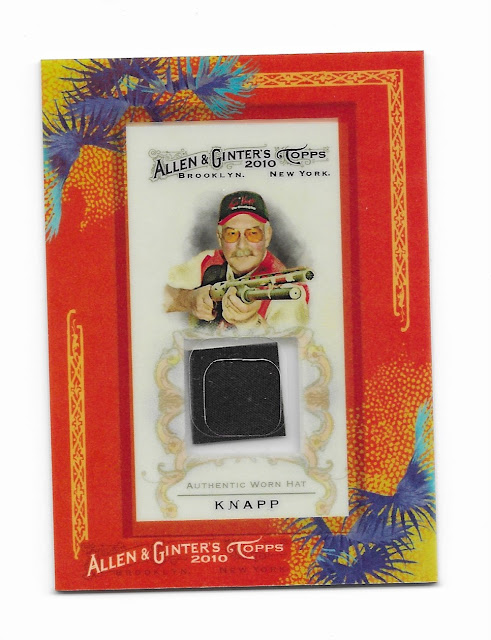 I decided back in 2010 (or maybe it was actually in 2011) to go after the 2010 A&G relic set since I happened to like that many of the relics were sort of "oddball relics."  It fit perfectly with the A&G brand and it makes acquiring each relic a lot of fun (such as my last relic which was a piece of a tie)!  I like that this particular relic bit seems to actually match the hat that Tom is wearing in the card's photograph.  That's a nice touch, even if it isn't the same hat.

As you can see, not only am I still looking for a fair number of relic cards, I'm also missing a fair number of minis!  It'd be great if I could finish off at least one or two of the sets here before the end of 2020.  After all, one of my stated resolutions for this year is to get my want list down to under 90 sets which means I need to finish a number of different sets - I think the three mini sets here should all be fairly easy to complete if I put my mind (and wallet) to it!
Allen and Ginter 2010 eBay