on April 05, 2020
Back in early 2011, I tried cobble together a checklist for the notoriously difficult Allen & Ginter relics for 2010.  In the years since then, I've learned quite a bit about the set but I haven't found any single source that lists all of the pertinent information (my original list had plenty of cards that were actually never produced).

In the past couple of weeks, I've gotten back to doing daily eBay searches for 2010 Ginter relics that I still need.  The best part of that is that I've actually won a couple of auctions including this lovely Glenn Singleman shirt card. 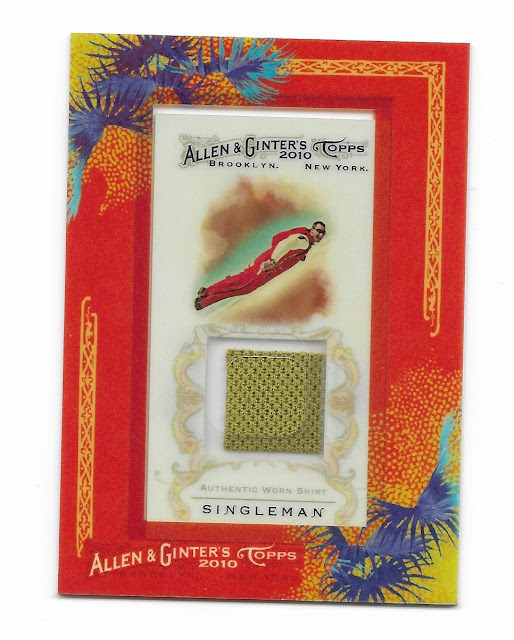 Singleman is a base jumper which is probably something that's way more risky and/or scary than anything I'll ever do in my lifetime!

Since I'm still actively trying to finish off my set (I still need another 15 relics before I can say I'm done), I thought it'd be helpful to have all of my compiled information in a single post/checklist.


That's a total of 100 different relic cards to chase!

Besides those, there's also a Sig Hansen relic redemption card (but if you had mailed in the redemption, you were sent a Sig Hansen autograph instead so the redemption doesn't really count as a relic card in my book though if I find one sometime for cheap I may buy it just because).

The following cards were on various released checklists at some point in time but I believe that don't actually exist:


I hope all of that is helpful to anyone who happens to be looking for more information on the 2010 Topps Allen & Ginter relic checklist.  And, if by some chance you happen to have any of the relics that I'm still missing I'd love to trade for them (or even buy them outright from you if necessary)!!
Allen and Ginter 2010