Last Tuesday, I held a pair of group breaks (2004 Skybox LE and 1998 Topps Stars 'N Steel).  If you'd like to watch the video and avoid any spoilers, you can do so here.

The 1998 Stars 'N Steel box contained 12 "mini folders" where each folder holds three metal cards.  As you'd expect, the checklist for the set is quite small (only 44 cards in total) and a box of 1998 Stars 'N Steel should contain 35 base cards plus 1 gold parallel.  You won't quite get a full base set in a box but you will get close.  The set is mostly the usual suspects of the day...plenty of sluggers and a few star pitchers.  In terms of the big names, I'd say we did pretty well with our box - here's a sampling of some of my favorites that we pulled. 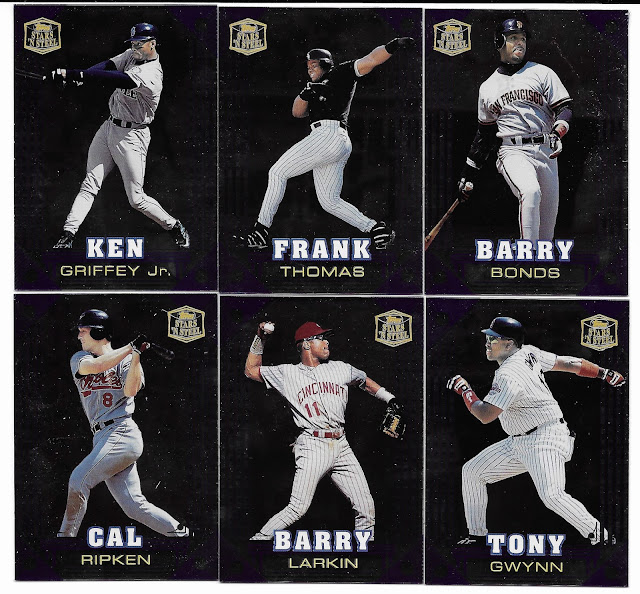 Unfortunately, the cards scan like crap but I promise these are GREAT looking cards in person (check out the video for a better view).  I tried scanning the cards twice but each time they came out way too dark to make out any of the details (or the shine of the metal).

Our lone non-base card of the box is the one-per-box gold parallel and I'd say we did well here too! 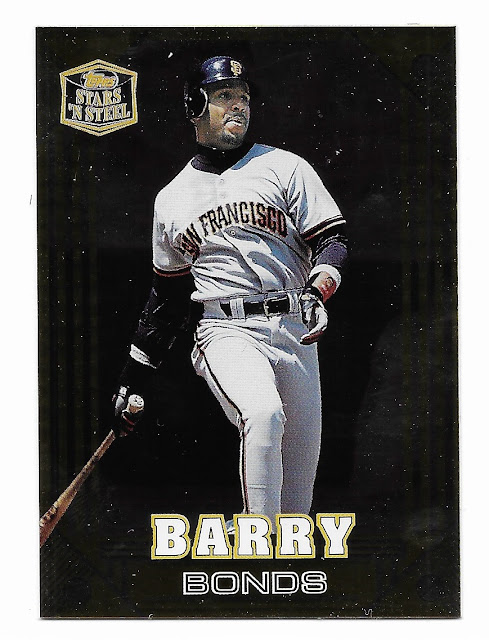 Pulling that gold Barry Bonds card back in the day would probably have been worth plenty of dollars!  Even today, it's still a pretty sweet card (congrats to Ben Morris who had the Giants in this particular break).

Overall, I have to say that I enjoyed the Stars 'N Steel box.  Our team breakdown from our box was the following:

That's a nice mix of teams represented (and the Braves and Rockies both having the most cards is actually quite common for products like this around the late 90s)!

I didn't know much about this set and I'm fairly certain I've never seen even so much as a single pack of this stuff out in the wild before!  As it turns out, all of the base cards in the set are die-cut...not enough to be distracting (or annoying to store) but just enough to make them stand out from the multitude of other sets released around 2004!

One thing I noticed about the die-cutting when having all of the box's contents stacked together...the die-cuts aren't all done to the same depth.  That is most definitely not pleasing but it only matters/is noticeable when the cards are in a large stack.

Each box of 2004 Skybox LE contains 18 packs but with only 3 cards per pack that means there are only 54 cards in total.  With 30 MLB teams represented, the odds were fairly high that we wouldn't pull at least one card for each team and that did happen here.  As far as base cards go, the Dodgers, Mets, Red Sox, Blue Jays, and Indians all got shut out which is a bummer (especially for a group break).  Luckily, I did open a bunch of other random (free) bonus packs and all of the aforementioned teams did get multiple cards out of the bonus packs.  Still, it would have been nice for each team to get at least a single base card.

The Red Sox were one of the teams that got shut out of base cards but they actually did quite well when it comes to the inserts in the box.  For starters, one of our three "Sky's the Limit" inserts went to Boston.

The "Sky's the Limit" cards are not serially numbered nor are the L.E.ague L.E.aders cards (of which we pulled one - Carlos Delgado). 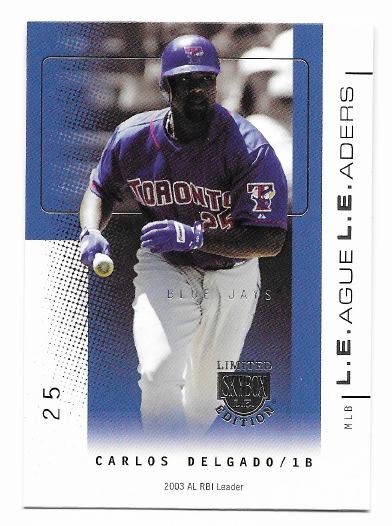 Like Boston, Toronto was shut out of base cards but they scored a nice insert so all was not a waste for that particular team slot!

The rest of the cards from the box are all serially numbered beginning with our one Prospects short print of Chris Narveson of the Cardinals (#/299). 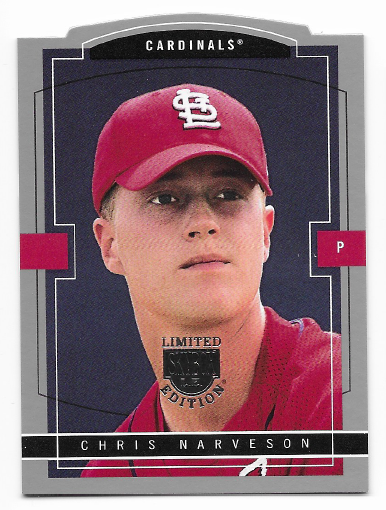 Boston also scored one of our three Gold Proof parallels.

Each gold proof parallel is numbered out of 150.  I was quite happy to see that Griffey Jr. show up for my own collection!  Always a thrill to pull an actual nice Reds card from a box.

That leaves us with our final three cards - our promised hits.  Each box promises two relics (including one numbered to 99 or less) and an autograph.  We made out quite well here in that both of our relics were numbered out of 50 beginning with this cool History of the Draft relic of Garrett Anderson of the Angels. 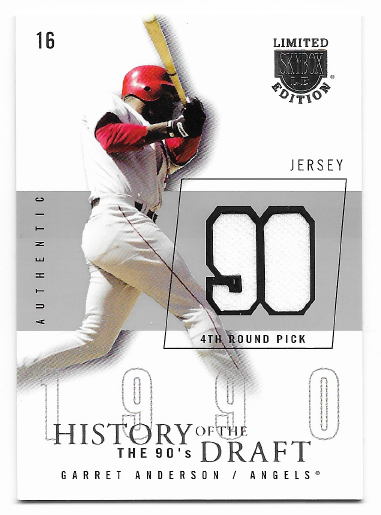 Our second relic was also out of 50:  Kerry Wood for the Cubs. 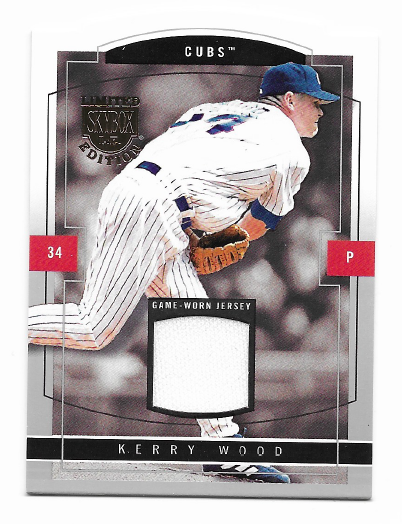 This is a Jersey Silver Proof relic card and is numbered #41/50 on the backside.

And last but most certainly not least, our promised autograph: 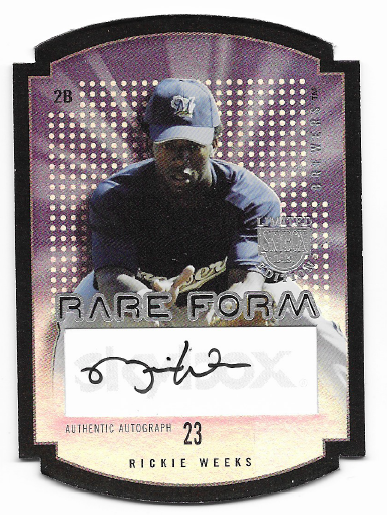 That's a gorgeous "Rare Form" autograph of Rickie Weeks for the Milwaukee Brewers.  This one is numbered 010/299 on the back and it's a great catch for the Brewers - a team that is often overlooked on relic/autograph checklists it seems.

Overall, I found the 2004 Skybox L.E. box a fun box to rip.  I like the base card design quite a bit and there was certainly enough interesting cards (parallels, inserts, relics, and autographs) to keep the box break fun.  I do wish there were more than three cards per pack but otherwise I have no complaints!  All in all, I'd say it was another successful group break night.  If you'd like to get involved in one of my group breaks, I do have another one taking sign-ups as we speak (go here for all the details).