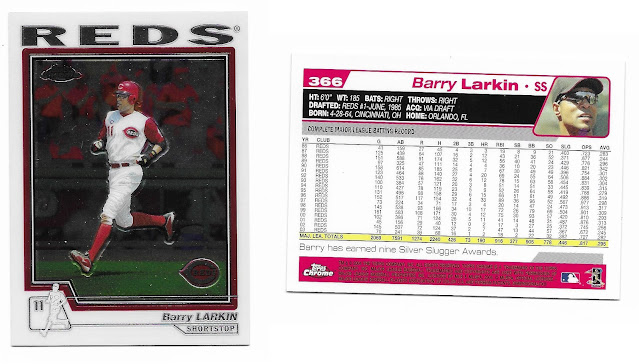 The 2004 set isn't the sharpest looking set in Chrome form, at least if you ask me.  The one exception to that is the black refractors which I do think look particular nice in 2004...and I'd love to show you Barry's 2004 black refractor but unfortunately I don't (yet?) own it.  In fact, other than the base version of Larkin's Chrome card, I don't own any other 2004 Chrome Larkins - that means I still need the following:
That's it though since Barry only showed up on one base card and zero inserts for the year.
Other than the "Chrome" aspect of the card, this particular Larkin card is exactly the same as Larkin's flagship card from 2004 Topps (well, that and each card has a different card number within the respective sets).  The only other thing I can say of note here is that Barry Larkin was only featured in Series 2 of both sets (flagship and Chrome) in 2004.  Thus, if you are only a Barry Larkin collector you can safely ignore series 1 of both of those sets!
Barry Larkin Larkin Collection Topps Chrome 2004