Today is a celebration of giving thanks for all things - family and food probably foremost but also for some of the other good things in life.  For me, I want to give a special amount of thanks to all of you who frequent my blog.  As someone who is trained in mathematics (and computer science), writing isn't supposed to be what I do for fun but it's because of all of you that I've been writing here at Nachos Grande for well over a decade now!

I also want to give thanks to all of you who have joined my Facebook group break page (and those who haven't but still participate in the group breaks that I cross post here at Nachos Grande).

They do say that actions mean more than words so I'm pleased to show off my most recent display of thanks in the form of my first "free" group break.  The basic idea that I have for my group break page is that I keep a running list of everyone who bought a team (with multiple entries for buying multiple teams) in my group breaks.  After enough breaks have ran, I'll randomize all of the names and the names at the top of the list will get into a free group break (ideally for something "high end" that most of us can't afford on our own).

My first free break occurred this past Tuesday and it was for a box of 2016 Topps Strata.  Like most high end sets, I knew nothing about the Strata set but I was super excited to open it for everyone.  For this particular break, we had 253 entrants and 111 different players that were possible to pull in 2016 Strata.  I ran this as a player break so I randomized all of the entrants and took the first 111 such people and assigned them to the players.  I then allowed trading of players for about a week prior to the ripping of the box on Tuesday.

The 2016 Strata box only holds two cards - a promised autograph and a promised relic card.  From what I read online, every other box will replace the relic with an auto/relic combo card.  We must have gotten one of the "basic" boxes though since our first card was a single relic: 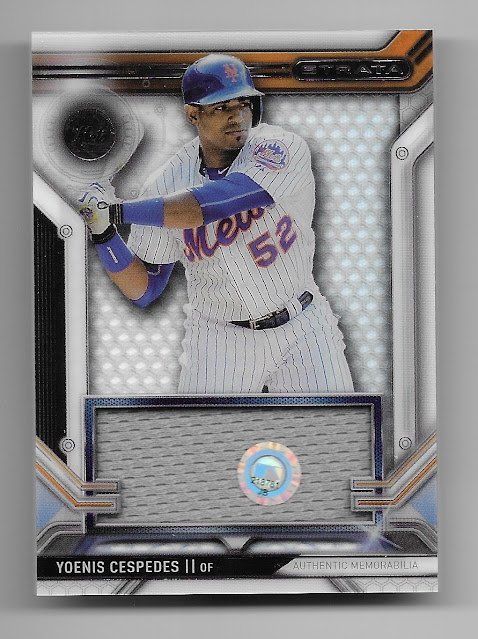 That's Yoenis Cespedes of the New York Mets.  Cespedes was actually acquired via the trading that took place after the initial player assignments were made - and in the end it was Ben Morris that gets this one!  After searching the checklist, I've determined that this card is a base version of the Clearly Authentic Relic cards.

One thing that's particularly cool about the cards in 2016 Strata is that each relic bit comes with a sticker with a code on it.  You can then look up the code on MLB's website and find out what exact game that particular jersey was used in.  For the Cespedes, that game happened in October of 2015!

Our second (and final) card from the box was a gorgeous autographed card of Buster Posey! 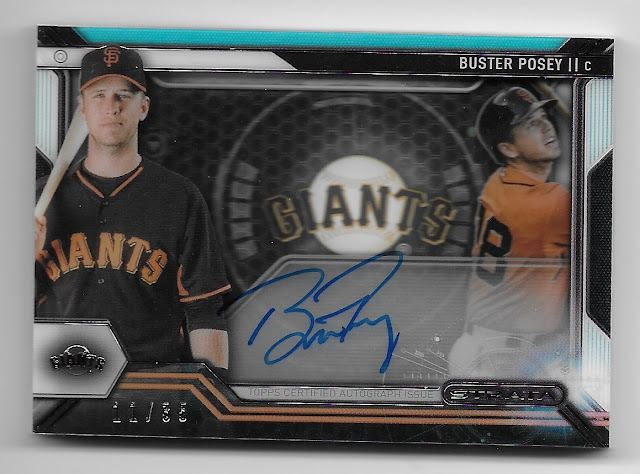 This (super thick!) shadow box type card is numbered 11/35 and is one of the Signatures inserts.  Trust me on this, the scan doesn't do this one justice at all - there's a really neat depth effect happening with the different layers of the card that simply don't show up (well) on the scan.  Buster Posey was assigned to Ben Martin in this particular break and so he's the very lucky recipient of what is probably the nicest autographed card that I've personally pulled in 2020!

As I said at the top of the post, Happy Thanksgiving to everyone and a special thank you to all of you who read this blog, participate in my group breaks, and/or trade with me!  Without all of you, I'm 100% positive my interest in this hobby would have waned many, many years ago.

Here's to another decade (or more) of Nachos Grande - and speaking of Nachos, I'm hungry...where's that turkey at?!