on March 15, 2011
Judging by comments on my previous post, it seems like people would like a (somewhat cheap) Gypsy Queen Group Break.  Well, I aim to please - so here are the details. 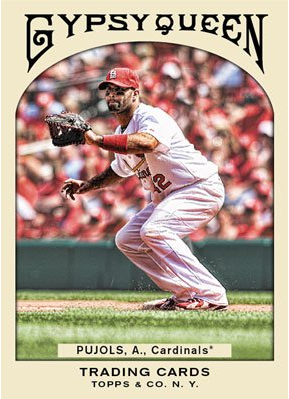 Since the break consists of two boxes, there should be LOTS of good stuff - here's what we can expect when you combine the two boxes:

Here's a link to the full 2011 Gypsy Queen Checklist.

Here's a link to the 2011 Gypsy Queen Sell Sheet

Finally, here's a link to a blog entry I wrote back in December of last year about why the Gypsy Queen set could be pretty cool.

Now for the reason you are - to sign up!

The first team is $15.00, each team after the first is $12.00 a piece.  Remember, this group break is for TWO Hobby boxes, so there are twice the opportunities for relics and autos for each team!   The set is quite large (450 total cards) so there shouldn't be many duplicates if all goes well.  (And, as usual, I won't mail any duplicates unless you specifically ask for them.)  Also, any non-baseball (or multi-team cards) will be randomed off.

Please leave a comment below with the team(s) you are claiming and then send PayPal payment to:  fanofreds (dot) auctions (at) gmail (dot) com (the same email that is in my profile).  I would appreciate all payments sent as "gifts" along with the TEAM(S) you are claiming in the subject line!  The person that pays first is the person that will get "dibs" on a particular team - so act fast before someone claims your team!  With the prices (hopefully) low enough, I'm expecting to fill all of the slots - please don't make me lose money on this venture or I'll never convince my lady to allow me to do this again!

One more bonus:  IF we happen to pull a Reds hit (which is the team I claimed), I'll throw in at least TWO hits from random sets to teams that are claimed (assuming all teams are claimed).  That way I can guarantee that there will be at least 8 hits distributed amongst my fellow group break participants!