Jaybarker's Junk is my Treasure!

on March 28, 2013
I'm fairly certain my post title isn't unique - but it doesn't matter.  I recently received a PWE from Wes over at Jaybarkerfan's Junk.  Wes is another trader with whom I have an ongoing "send some cards when I feel like it" type of trading going on.  It wasn't all that long ago that I sent Wes a package of Braves (see those on his blog).

As a return of sorts, Wes sent me a small package of six different Reds.  Among them were a Corey Patterson (who will not be shown), an UD Documentary card, and a Justin Lehr.  While those three were appreciated (yes, even the Corey Patterson) - the real highlights are below. 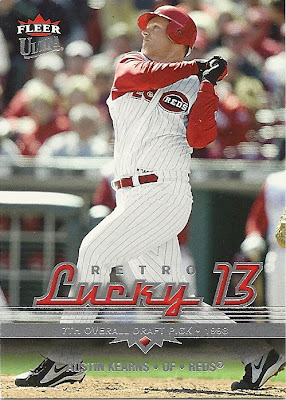 I had high hopes for Kearns when he first burst onto the scene as a Reds' rookie.  He possessed a rifle for an arm and seemed poised to learn how to hit for both average and power.  Unfortunately, he never really managed to take the next step into stardom. 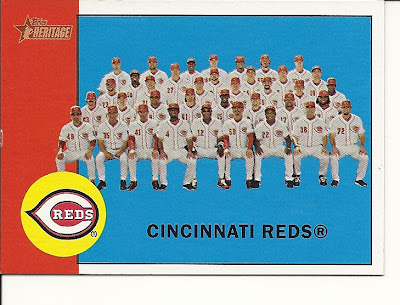 I'm a fan of the team checklists, though I wonder why Topps thought it was a wise idea to crop out the bench the players are sitting on.  I also have to wonder if there is some Photoshop tomfoolery going on - it looks like two of the Reds (Baker #12 and Juan Lopez (?) #59) are playing footsie. 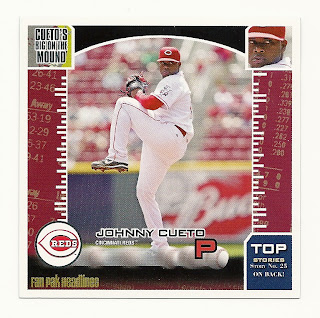 This card amused me because I recently offered up all of my Fan Pak cards as trade bait.  I will be holding on to this particular card but the other Fan Paks that I own are still available!

Thanks for the trade package Wes!  And, as always, if anyone else would like to trade please check out my want list and make an offer!
Delivery Time Jaybarkerfan's Junk