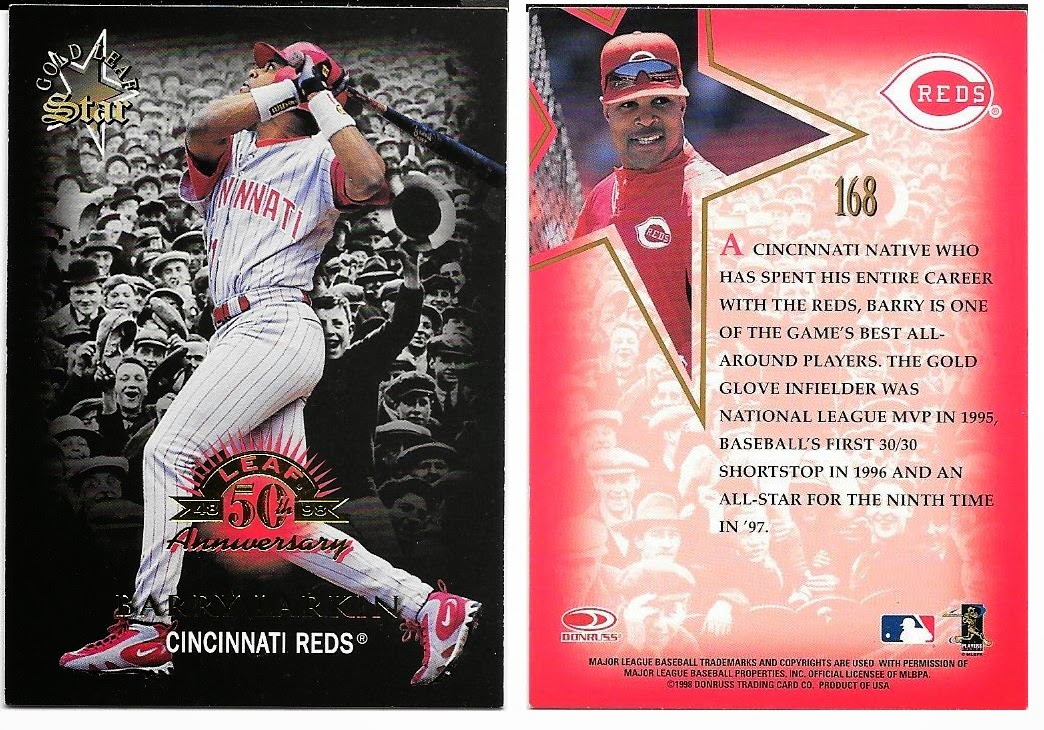 In 1998, the Leaf set was a 200 card set (1 - 201 with no card number 44 in honor of Jackie Robinson).  There were three different subsets (Curtain Calls, Gold Leaf Stars, and Gold Leaf Rookies) all of which were short printed.  This particular Barry Larkin is part of the Gold Leaf Stars subset which combined with the other two short printed subsets were seeded 1:3 packs.  Barry does not have a "regular" base card in the 1998 Leaf set.

As for the card itself, I never was a big fan of Leaf sets and this set is certainly not one of Leaf's finer offerings.  The front features an old timey background photo which makes no sense for current stars.  Furthermore (and much worse), the Leaf logo is smack dab in the middle of the card completely cluttering up the design with ugliness and foil overload.

The back of the card avoids the Leaf logo (thankfully) but otherwise it's not much of an improvement over the front side.  I do like the inset photo at the top of the card back framed by a star - it helps to tie together the "Gold Leaf Stars" subset.  I would have liked to have seen some career statistics (especially since Larkin doesn't appear on a regular base card in the set).

All things considered, I'm extremely happy to have one of the two Barry Larkin cards in the set (the other is a serially numbered insert set) but I am positive that I won't ever try to track down the complete 1998 Leaf set!
Barry Larkin Larkin Collection Leaf 1998