On Tuesday of this week, I showed off the first half of a large batch of new (to me) original 1887 Allen & Ginter cards.  Today, it's time to look at the second half of the cards that I was able to strike off of my want list. 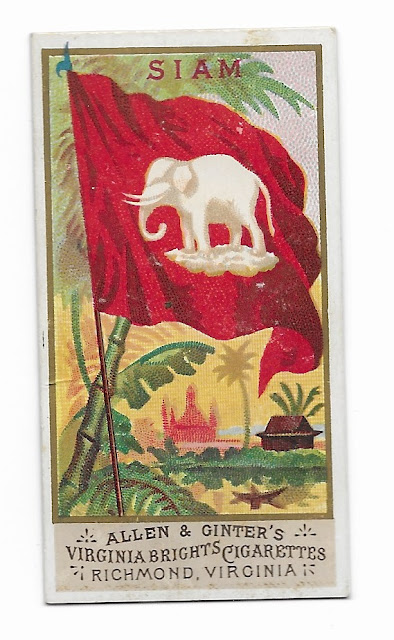 I love all of the jungle imagery on this particular card - and the elephant on the flag is quite striking as well!  Siam is now more properly known as Thailand but unfortunately Thailand's flag is a much more boring red, white, and blue striped banner as opposed to the much more unique elephant adorned flag of Siam. 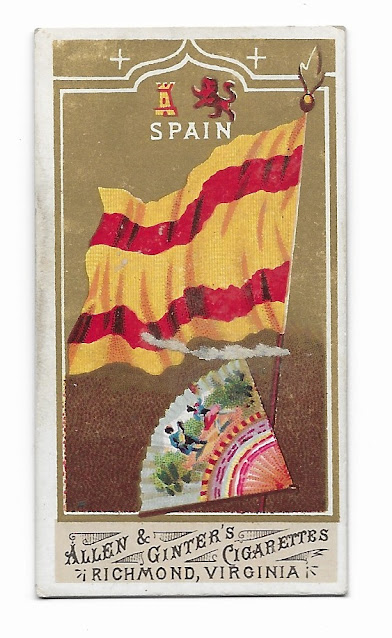 I've been lucky enough in my lifetime to have visited Spain once, but it was only the city of Barcelona and it was only for a weekend training session.  I'd love to get back to Spain again someday and really explore all that the country has to offer.  As for the card above, it's certainly another nice looking card front (you'll notice I'm not showing any card backs...those are all pretty rough from this particular eBay lot that I purchased)! 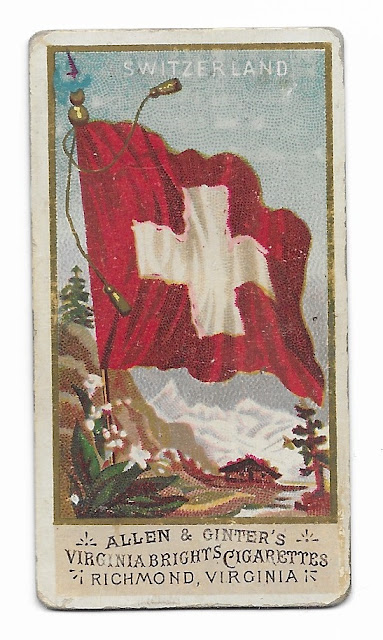 The white cross on the red background is a classic image for sure.  I'd wager this is one of the more famous/familiar flags in all the world though I guess I don't have any hard and fast data to back that claim up.  A quick Google search seemed to suggest that I'm sort of wrong (the Swiss flag seems to be in the "second tier" of most recognizable flags after the likes of the US, China, Canada, Russia, etc.). 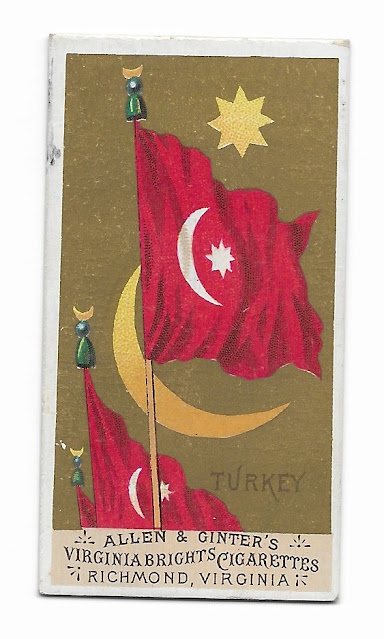 I love the look of this card, the way the flags appear to be all in a row under the night sky with the same moon and star that appear on the Turkish flag.  It's a unique look within the set and for that reason, the card stands out to me. The jack of the United States is primarily a maritime flag, and interestingly enough, it's still flown by modern US Navy vessels.  It's basically a blue flag with 50 stars on it, no sign of any red stripes (there is, however, a different version of the United States jack that does have red stripes along with the motto "don't tread on me" that's been used as recently as 2019). 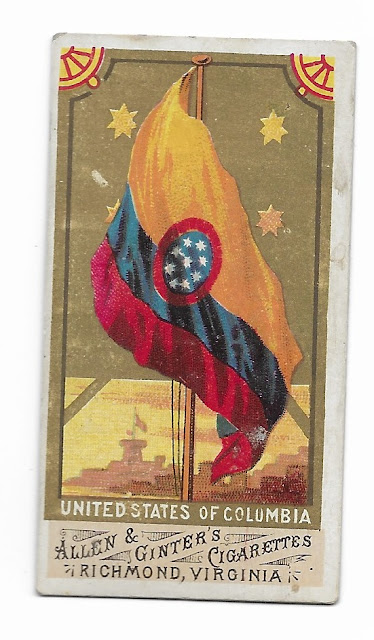 The last of the twelve new-to-me flag cards is this card of the United States of Columbia.  The interesting thing about the United States of Columbia as a country was that it was actually replaced by the Republic of Columbia in 1886 - a full year before this particular card set's release.  I know people rag on Topps these days when they don't get a player featured with his correct team...well, here we have a country featured that didn't even technically exist by the time of the set's release!

That does it for all of the new-to-me cards from this particular purchase.  As I said earlier, the purchase was for a large lot of 1887 flag cards so I also ended up with 19 duplicate cards!  I'll probably either use those for trade bait or else resell them to (hopefully) raise some funds to buy the remaining cards that I'm missing from this set.

Speaking of missing cards, here's my updated want list for the set:

If nothing else, I'm still floored that I'm even this close to completing my second original Allen & Ginter set from the 1800s!