on December 01, 2021
I'm back with my second box of 2021 Topps Archives (the other box in our recent group break).  This box will serve as my second review box for the set - and as you'll see, for everything the first box was lacking, this particular box made up for (and then some)!
We'll begin with our box topper: 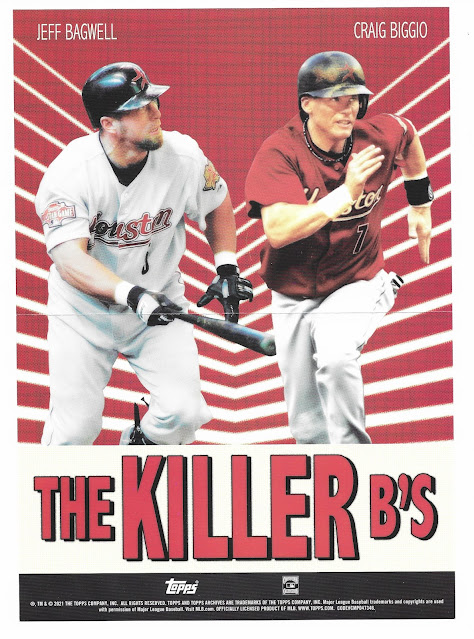 That's a sweet poster for any Astros fan, especially a fan who is roughly my age and remembers the Killer B's all too well.  As a Reds fan, this particular poster kind of gives PTSD since those Killer B's were always killing my Reds, or so it seemed.
In my previous review post for 2021 Archives, I went through and scanned representatives of each of the various subsets within the set.  I'm not going to repeat that process (it was a ton of scanning) but I'd invite you to check out my first review for the basic idea of what to expect from a box.
I will, however, give you the general breakdown of what this box held:
1957 Design:  26 cards
1962 Design:  30 cards
1973 Design:  24 cards
1983 Design:  23 cards
1991 Design:  13 cards
2001 Design:  22 cards
2011 Design:  25 cards
2091 (fictional) Design:  10 cards
Total:  173 base cards which is almost exactly what the first box had (174 base cards there).
Now, on to the inserts.  We'll begin with the 1:6 Movie Poster cards: 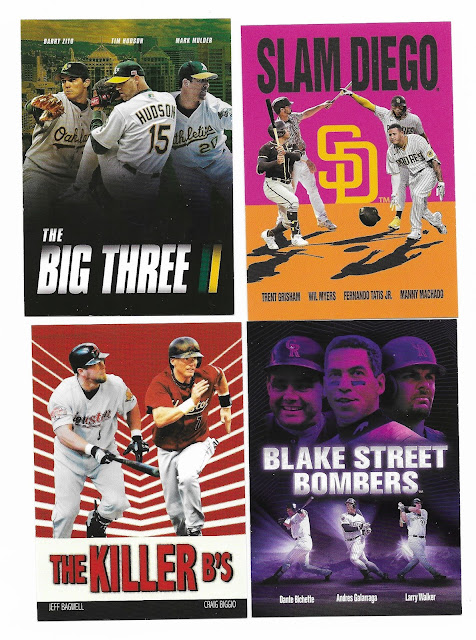 As you can see, we got the card version of the Killer B's as well as the card version of Slam Diego (our poster box topper from the previous box).  It was also kind of interesting to see that we got a poster "The Big Three" here which celebrated Oakland's pitchers while in the previous box our "The Big Three" celebrated Braves pitchers.  Still no sign of that Big Red Machine poster though, the one I was personally hoping to see!
Next up, at 1:5 packs, the 1963 Topps Peel-Offs: 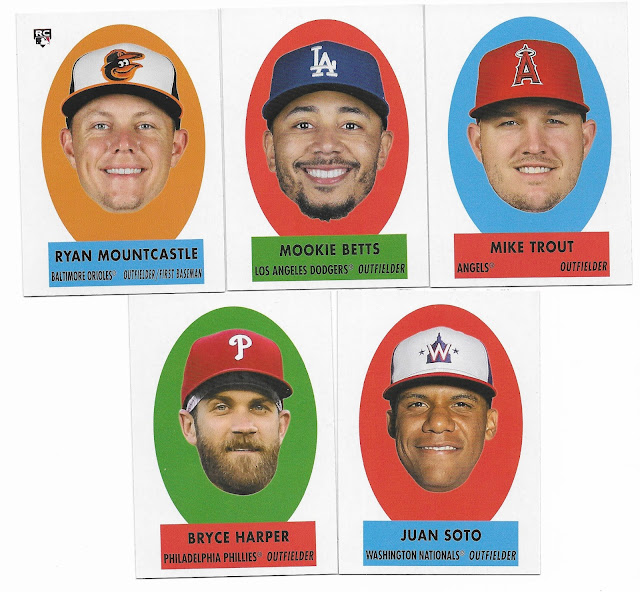 We pulled five of these and, luckily, all five were different than what we pulled in the first box.  Always nice to pull a Mike Trout card!
The 1991 Bazooka Shining Stars inserts (seeded 1:5 packs) are next: 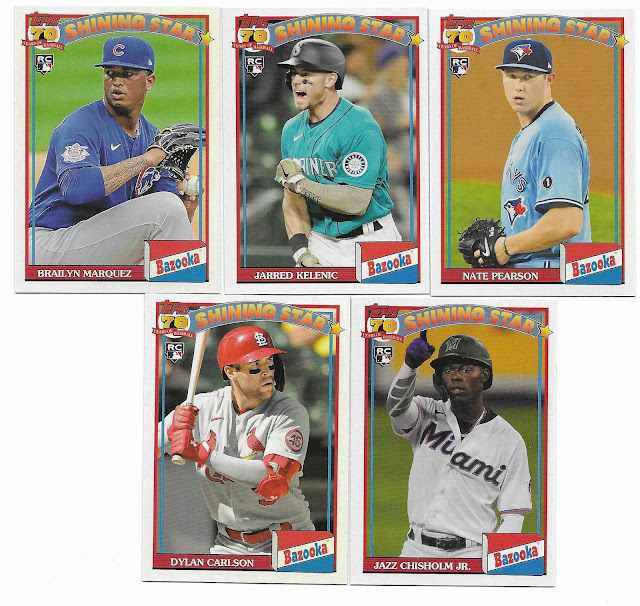 Like in the first box, we found five in this box as well.  Happily, all five were different cards this time around - a great thing for a group break (at least from the group break host perspective as it means more people in the break will get inserts)!
Our final insert from the box was the 1:24 pack 1994 Topps Draft Pick card: 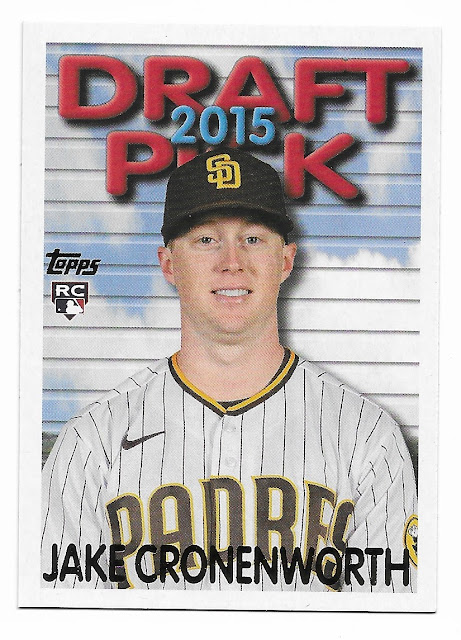 The first box didn't provide us with one of the Draft Pick inserts (which was a shame since they are considered box hits) but at least this box held one!
Moving on to the parallels:
First up, this Topps 70 Red Hot Foil base emblem variation (seeded 1:141 packs)! 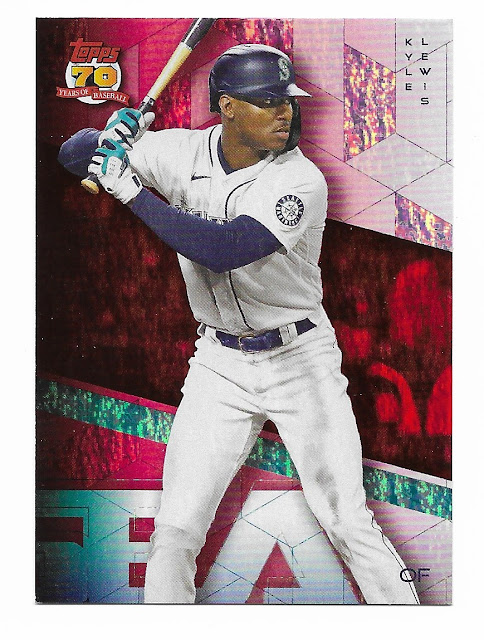 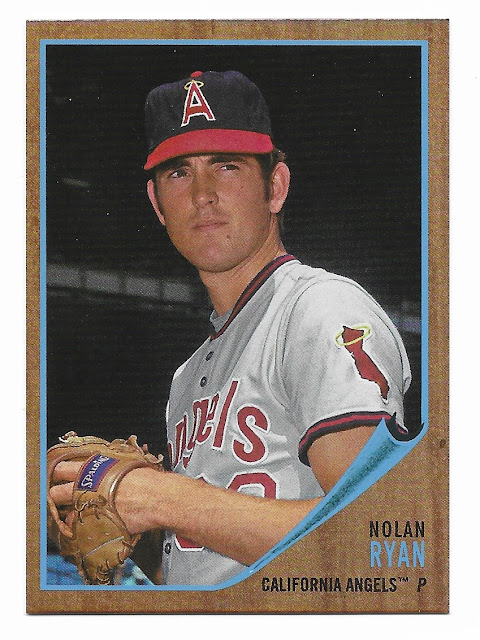 The Blue Foil parallels are hobby exclusive parallels.  The Blue Foil parallels are seeded 1:94 but pulling someone with the star power of Nolan Ryan and having it numbered out of only 25 was certainly an exciting find for all of us (and even more so, I'd imagine for Jason Williams who had the Angels in this particular group break)!
That leaves us with our two autographs to take a peek at.  Luckily, this box provided both of the promised autographs (something that the first box did not, unfortunately). 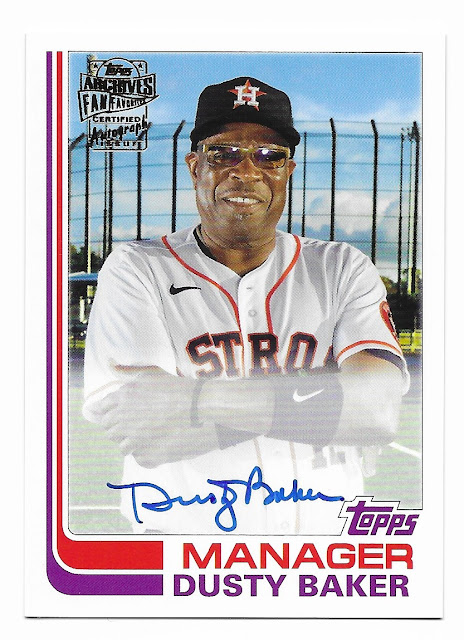 That's a beautiful Dusty Baker autograph - great player, great manager, and someone who has connections to a number of different MLB teams (this autograph goes to the Astros slot, for what it's worth).
Finally, last but certainly not least: 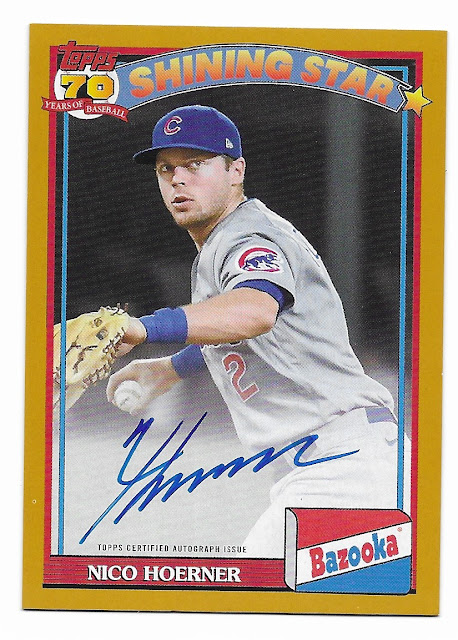 That's a GOLD 1991 Bazooka autograph, serially numbered 1/1 on the back!  That's right, a true one-of-one autograph pulled!  The odds on these are astronomical to say the least - pack odds say that the Gold Bazooka autos are seeded a whopping 1:112,060!  A huge congrats goes out to Andy Shafer who had the Cubs in this particular break - I'd say his entry fee was money well spent!
Overall, I give the 2021 Topps Archives the following rating:
Set Design:  A-
Collation:  A
Opening Thrill:  A+
Overall:  A+
What a tale of two boxes.  The first box earned a C- from me, mostly because of the missing autograph (and missing Draft Pick box hit).  This box, on the other hand, produced amazing autographs as well as a couple of super nice parallels.
Box Review Topps Archives 2021