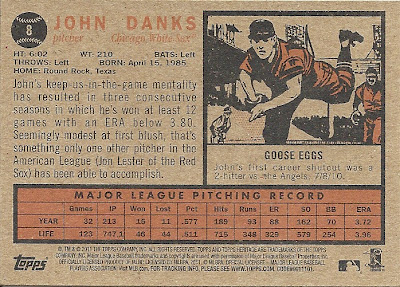 This particular Heritage set has a lot of quirks - one such quirk is that the early card numbers are much smaller than the card numbers of the later cards.  As you can see from the Danks card back, the number 8 is in a small baseball.  Compare this card back to that of Daric Barton below and you can see the difference quite clearly. 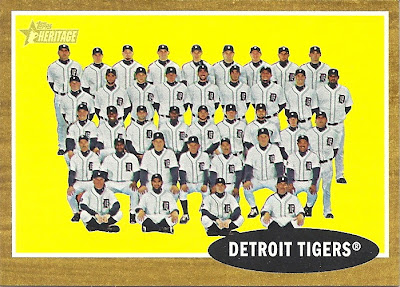 Nothing like a photoshopped team card - complete with what appears to be a top row full of players without a torso.  I wonder how they decided which four guys were "stuck" sitting cross-legged on the ground?  I do, however, really like the card back for the team cards.  There is a full pitching breakdown vs. all opposing clubs.  For instance, I can see that Max Scherzer was 12-11 last year for Detroit.  He beat a bunch of clubs one time each, but he lost twice to the Royals (and won one) as well as the Rays (whom he did not beat at all).  He did well against Seattle (2-0) but not so well against Cleveland (1-3).  It's stuff like that that really makes my mathematical brain happy.  It's problems like the Reds team card is a short print (again) that drives my collecting brain crazy.  Unless I buy the card, I'm highly unlikely to ever acquire it...unless I luck out and find it in this blaster! 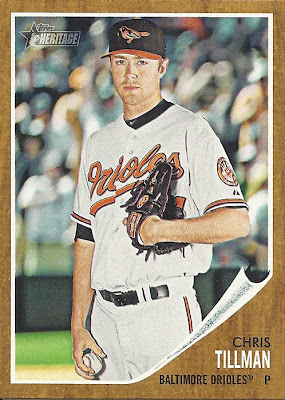 Tillman threw a no-hitter and a one-hitter in 2010 - both in the minors.  How have I not heard about this guy? 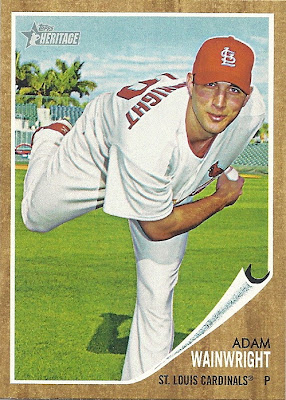 This card bugs me.  I HATE the fact that Wainwright still has the ball in his hand after a supposed pitch.  It's so wrong that I can't focus on anything else whenever I glance at the card.  Yuck. 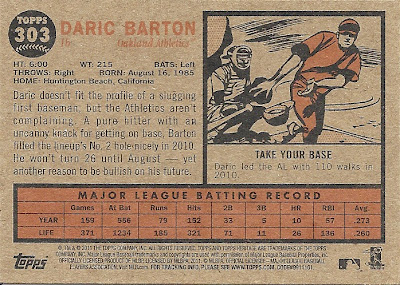 Trust me, be glad I scanned the back of this card (so that you can compare it to the card numbering of the earlier cards like John Danks - see above).  The front of this card is a head shot of Barton where it looks like the camera is about 3 inches from Barton's nose.  Trust me, no one needs to see every pore of the man's face. 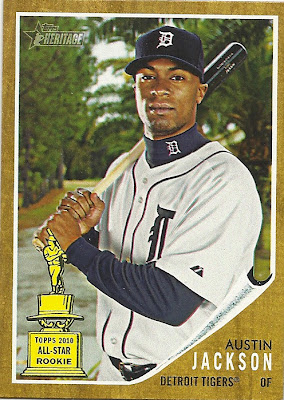 There's probably a joke in there about my trophy being bigger than his.  Also, what's up with the top hat in the middle of the trophy?  Was it designed by someone who loved Monopoly a little too much? 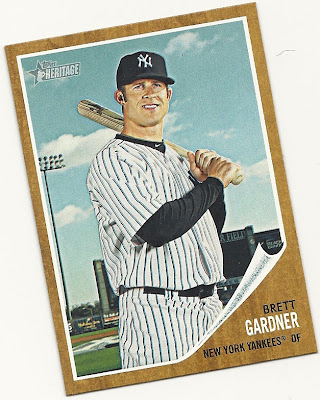 Hey Holiday Inn, good thing you paid for the ad spot way out there in the outfield - you just got a free plug on my blog.  I dunno, I've got nothing else to say about this card.  Apparently, even my scanner didn't like this card as it would not sit straight on the glass no matter what I tried! 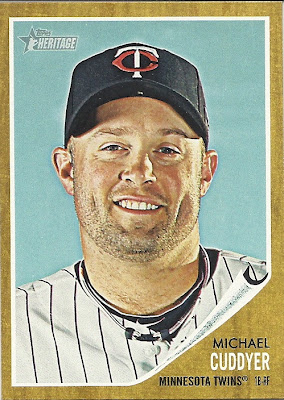 Here's one of those mug shot cards done right.  Cuddyer looks happy enough having his photo taken, and the camera is at a respectable distance.  The background is pretty dull, but that's ok -it draws all your attention to the subject of the card. 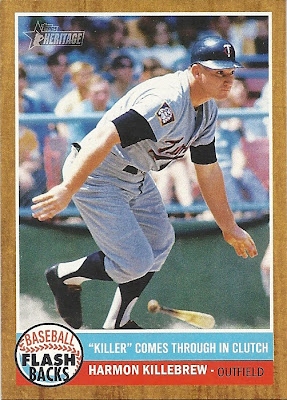 The Baseball Flashbacks are seeded 1:12 packs - so I was lucky to get one in the blaster.  For as boring as the Topps Heritage inserts are, they are amazingly difficult pulls for even the most basic sets!  As for this particular card, it celebrates Killebrew's eigth inning, bases loaded, two out double that scored three runs and turned the Twins 4-3 deficit into a 6-4 win over the Yankees.  Maybe Topps finally hired someone who doesn't have a lot of Yankee love - this particular game doesn't seem overly impressive or special...but is a way to rub it in to Yankee fans for no apparent reason.


That's two packs down in the blaster - and while there are certainly some really nice cards, there are also some really ugly cards.  I'm still on the fence whether or not to collect the set - but currently I'm leaning towards not bothering with the set and using any short prints (like the one I pulled in the first pack) as trade bait with the goal of acquiring some of the short prints that I still need from the 2008 and 2009 sets.
Topps Heritage 2011