on August 12, 2011
It's time to speed the Upper Deck box up a bit - let's do two packs.  Of course, two packs in a single post is boring so let's do pack wars!  All scoring is arbitrary and at my whim.

The pack 11 card will always be listed first, the pack 12 card second.  I won't be listing the card numbers because that's too confusing when there are point totals as well.

Petco Park (Padres) vs.  Randy Wolf (Brewers)
I'm a sucker for the ballpark cards - which you probably already knew based on the first 10 packs.  I actually saw a game in San Diego once, but it was in the old ballpark (not the new Petco).  This one is easy, Pack 11 wins.  (1-0)

Brendan Ryan (Cardinals) vs. Halladay and Hill - Blue Jays Checklist (Blue Jays)
I can't go against Roy Halladay - at least not when he's paired up against a Cardinal.  (1-1)

Bailey and Suzuki - Athletics Checklist (Athletics) vs. Ryan Raburn (Tigers)
The team checklist cards are a nice addition, I remember searching through similar checklists with early 90s Fleer sets when I was a kid.  (2-1)

Omir Santos (Mets) vs. Chris Young (Padres)
Whatever happened to Chris Young?  I always thought he was a really good pitcher (his record indicates otherwise) but I haven't heard anything about him this year?  Heck, for all I know, he's pitching for the Twins or something along with Swarzak.  Even so, Chris Young beats out Omir...  (5-2, Pack 12 doubles their score!)

Corey Wade (Dodgers) vs. George Kottaras (Red Sox)
The biggest annoyance with Upper Deck not having a license is that they have to write Los Angeles rather than Dodgers on the cards.  For most teams, that's not a big deal - but when you host a group break it's much, much quicker to read off "Dodgers" and put the card in the correct pile rather than see "Los Angeles" and have to figure out which LA pile the card belongs in.  Kottaras wins for being in Boston which has only one team to it's name.  (5-3) 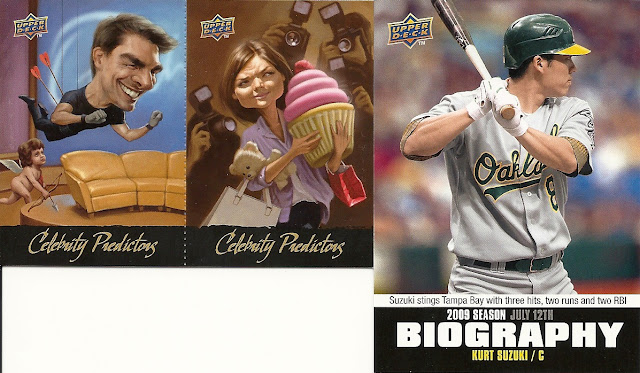 Those celebrity predictor cards are kind of mean aren't they?  We all know Tom Cruise is a bit of whack job, so why even bother putting him on a card?  And why are the cards perferated?  Is it so that when/if the couple shown splits you can easily tear the card to mimic real life?  Dumb.  Suzuki wins (and the Celebrity card joins the other one we already pulled and will be randomed off at the end).  (5-4, pack 12 with a nice little comeback so far) 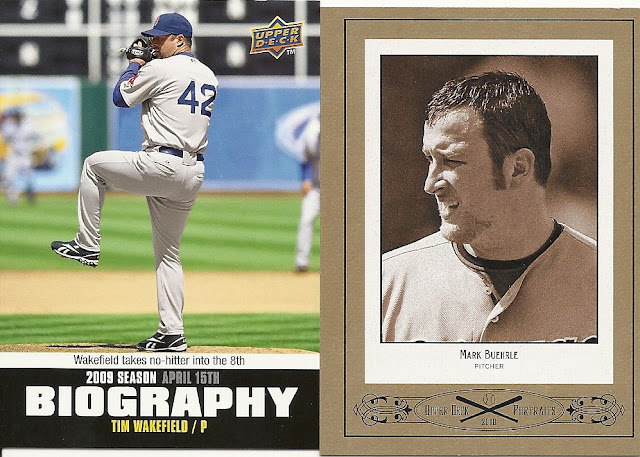 Aaron Cunningham (Athletics) vs. Casey Blake (Dodgers)
Gotta go with Blake on this one.  (5-7)

Hideki Okajima (Red Sox) vs. Shairon Maris (Nationals)
Neither player strikes much of a chord with me, but I think that Okajima has been the better player so he gets the point...and stops the streak of Pack 12.  (6-7)

Trevor Cahill (Athletics) vs. Jarrod Saltalamacchia (Rangers)
No one's name should look like a mixed up Scrabble game...  Cahill wins on simplicity.  (7-7, all tied up with four cards remaining)

Doug Slaten (Diamondbacks) vs. Todd Helton (Rockies)
The easiest pick so far - Slaten of course.  No, just kidding.  Helton wins in a landslide.  (7-8)

Michael Dunn (Yankees) vs. Everth Cabrera (Padres)
I hate to pick a Yankee but I think Dunn is the wiser choice here.  (8-8, tied again with only two cards remaining)

Ryan Theriot (Cubs) vs. Chone Figgins (Angels)
Figgins gets the nod here as I don't like Theriot since all he does is play for different Reds rivals in the NL Central.  (8-9)

Armando Gabino (Twins) vs. Edwin Jackson (Tigers)
In a stunning move, Pack 11 decided to go for the pity point (and a tie) by throwing out yet another Twin at me.  Too bad for Pack 11, I won't be giving the Twins two pity points in one Pack War...  Jackson wins, and with that, Pack 12 wins by a final score of 8 to 10.
Pack Wars Topps Lineage 2011 Group Break Upper Deck 2010