on June 24, 2012
There are plenty of things that are great about the blogging community - but I think the best thing is the sheer amount of variety in the various blogs out there.  Some people specialize in the newest stuff, others in vintage.  Some are full of snarky comments while others use exclamation points like they were going out of style.  Some people bust tons of packs while others spend their money on finding the perfect singles.  Heck, some people spend more time talking about their favorite team, their family, or even ponies rather than just cards.  And you know what?  It's all awesome!

In that spirit, I present a recent trade package from John over at Old School Breaks.  John runs a spectacular blog where he spends his money busting boxes of older products (kind of like I enjoy doing for my various group breaks).  Well, John is taking a bit of a break but that didn't stop him from sending me some more cards for my personal collection.

John's clearing space (as he told me in an email) so his loss is my gain.  First, a few random Reds that I didn't previously own.  There's a squished head card of Ken Griffey Jr from one of Upper Deck's SpX sets (a line that always confused the heck out of me so I didn't ever buy it). 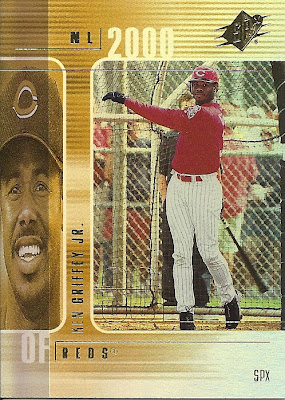 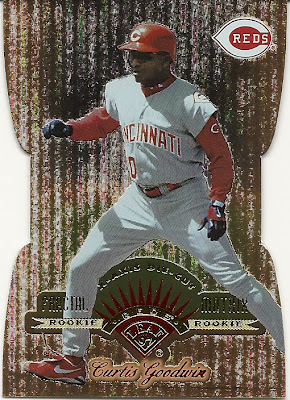 I see the Reds recent infatuation with leadoff hitters that can't actually hit has a long history dating at least as far back as Goodwin.  Goodwin had an 80% stolen base success rate - but as a career .248 hitter that doesn't equate to all that many stolen bases (only 66 in 5 years split between the Orioles, Reds, Chicago, and Toronto). 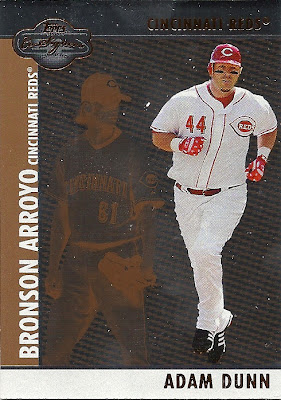 I never purchased a single box (or even pack) of co-signers so I know basically nothing about the set.  The back of the card only features Dunn's stats even though the front clearly highlights both players.  It's weird, but I kind of like it!

Moving on from the random Reds, there were four different Barry Larkin cards for my collection - including one that I almost purchased off of eBay not too long ago (but luckily I didn't)!  I'll show off all four cards at some point in my ongoing Barry Larkin Collection, but here's a sneak peak of two of the cards. 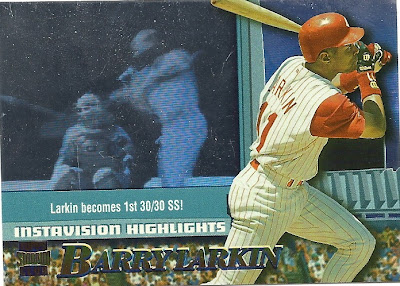 I have never seen any cards from this insert set - but it's kind of cool in a late 90s sort of way!  It combines the glossiness from higher end Topps cards with the holograms from the mid-90s Denny's cards.  Cool stuff if you ask me. 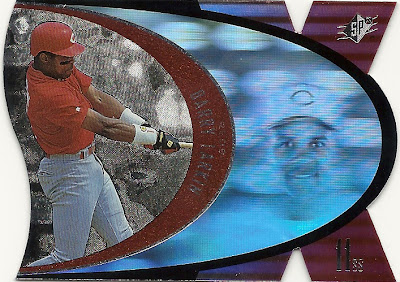 Once again, I can't tell you much about the set but the card itself is awesome.  So much shine, so many hologram logos (and Larkin's face), and yet it all works for me.

Thanks a bunch for all the great cards John - and I hope you return to your blog soon!  If anyone else would like to trade, you know the drill:  Check out my want list and make an offer!
Delivery Time Old School Breaks