Cards from Cards on Cards! (Plus a question)

on December 20, 2012
You might have thought it'd be all UD Vintage and old school Allen & Ginter this week here at Nachos Grande.  You'd be wrong though (but not by much to be fair).  I've also gotten back into trading now that my work is complete for a few weeks - and the results of said trades are starting to trickle in.  Today's delivery is from Kerry over at Cards on Cards.  Now, I generally don't like anything to do with the Cardinals but I have to admit that Kerry seems like a great guy, and he has a great blog.  Even better, I always have an outlet to rid myself of those unwanted Cardinals...and he probably feels the same way in regards to me and the Reds!

Kerry was able to knock a few cards off of my want list - including from a few sets that I've almost given up on ever completing.  It's trades like this that make me happy I haven't deleted said sets from my want list!  However, before I show the cards that I needed for my sets, I have a question about a Barry Larkin card that Kerry sent me. 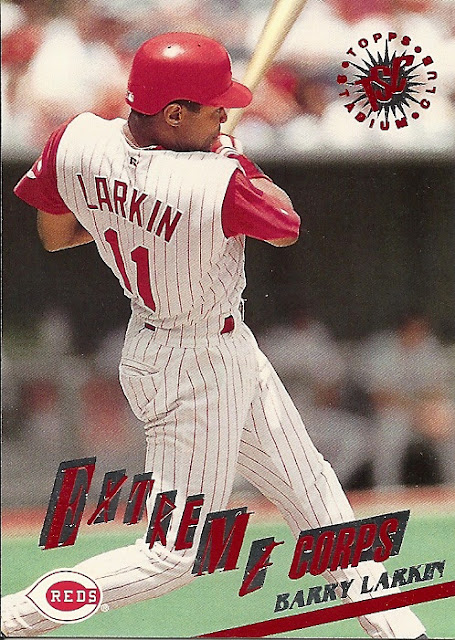 You see, I had already featured the above card as part of my ongoing Barry Larkin Collection.  The problem?  The foiling is different - in the version Kerry sent me, all the foil letters on the front of the card are red. 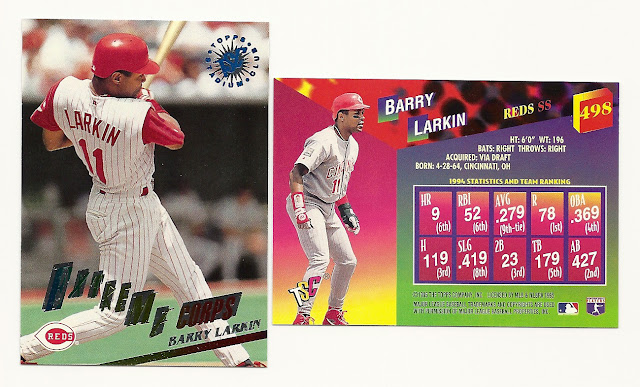 Notice:  On my version in my collection (and all other versions that I've seen), the foil lettering is a rainbow of sorts.  What gives?  Was there a parallel?  Is this a foil error?  I'd love to know!

Now that the big question has been asked, let's look at some of the sets that Kerry helped me fill binder pages for... 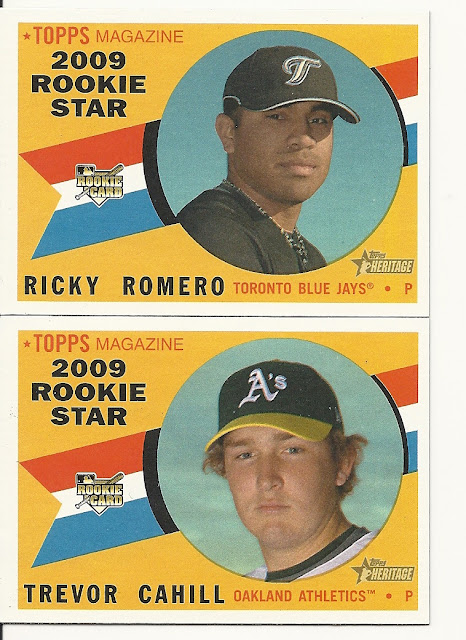 The 2009 Heritage set is a nice set, I especially love the backs of the cards.  In fact, I think it was the backs of the cards that drove me to collect the set in the first place.  Unfortunately, as any Topps Heritage collector will tell you, it's the short prints that will drive you crazy!  Obviously, I'm stoked to have been able to acquire two more for my set - I'm now only missing the following: 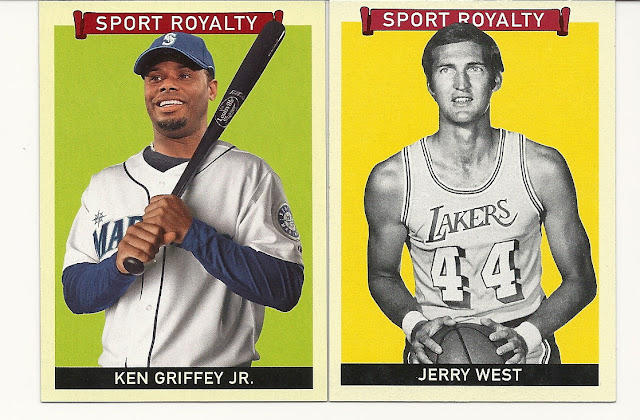 Another set chock full of short prints!  I think I've actually done better with the Heritage set than I have with the Goudey set, especially when you consider that Goudey is about half the size of Heritage in terms of total number of cards.  Of course, I am missing a bunch of Heritage inserts while Goudey was relatively light on the insert front.  As for the cards Kerry sent me, they were both short prints from the Sport Royalty subset.  I especially love the Griffey Jr. card, you can't go wrong with the kid!

And yes, in case you were wondering, here's what I still need from '09 Goudey: 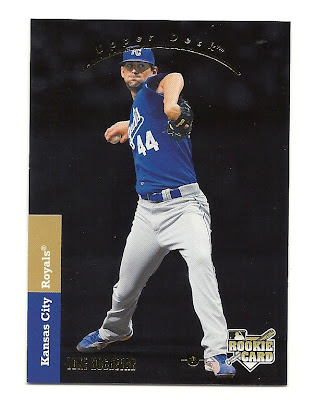 Although the short prints were annoying for both UD Goudey and Topps Heritage, I don't think any set has been as frustrating in terms of short prints as the 2008 Upper Deck Timeline set.  The set consisted of 50 base cards and then (seemingly) a million and a half short prints of various rarity.  At this point, I'm ecstatic anytime I can acquire a single card - such as the Hochevar that Kerry sent my way.  I'm also nearing completing with the set - all that remains are the mostly high numbered short prints. 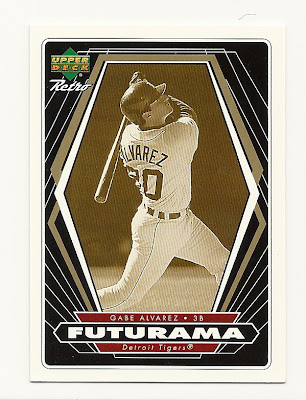 The 1998 UD Retro set is another one of my favorites - even though I only was able to open a box of the product relatively recently.  Unfortunately, you don't get a full set in a box so I've had to rely on trades to pick up the few missing cards (such as the Alvarez).  For the record (and since I've done it for every other set so far), here's what I need from UD Retro:

In addition to the cards on my want list, Kerry also found a new Barry Larkin for me (not including the one at the top of the post): 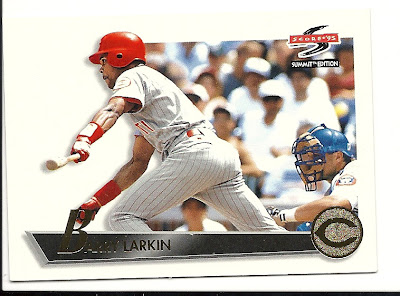 Thanks a lot for the trade Kerry!  And, as always, if anyone else would like to trade, check out my want list and make an offer!
Cards on Cards Delivery Time