You see, back in 1990 I was seven.  And, as any responsible seven year old will tell you, I used checklists to actually check off the cards I owned.  Somehow, I still have a few of my checklists (they were in my binder pages before I did the reorganization). 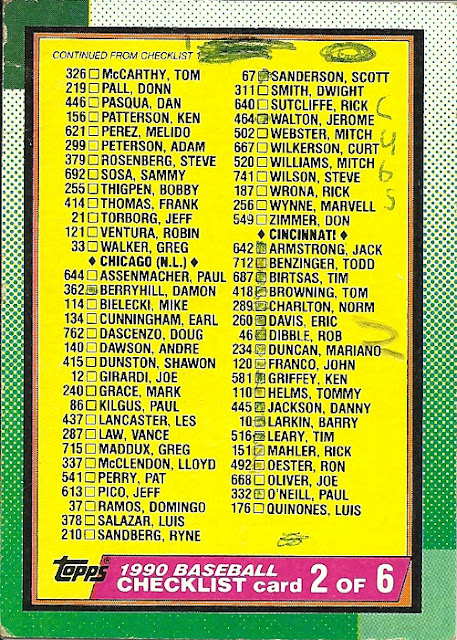 Let's begin with checklist 2 of 6.  You can see that I labeled the Chicago (N.L.) team as the Cubs - helpful reminder to be sure.  I also checked off the cards I owned.  It's easy to see that I was much more interested in the Reds that I owned as compared to the Cubs.

It also appears that I needed a better pen, or at the very least a scrap piece of paper to do the "ink starting" scribbles.

The back of the checklist isn't much better. 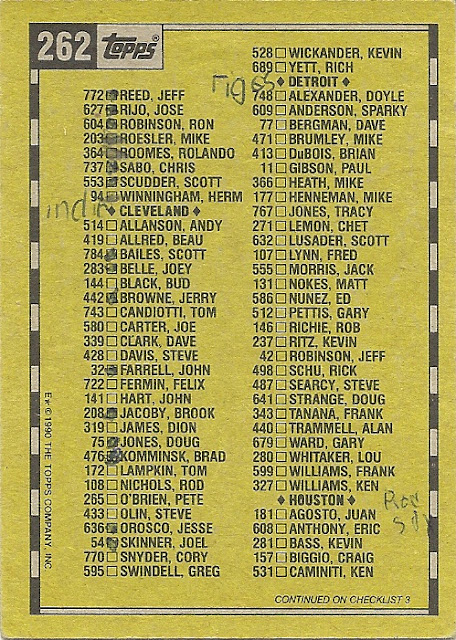 Apparently Houston is home to the Red Sox.

Moving on to another checklist, you can see that once again I labeled the teams "correctly."  Or, at least as correctly as my seven year old brain would let me. 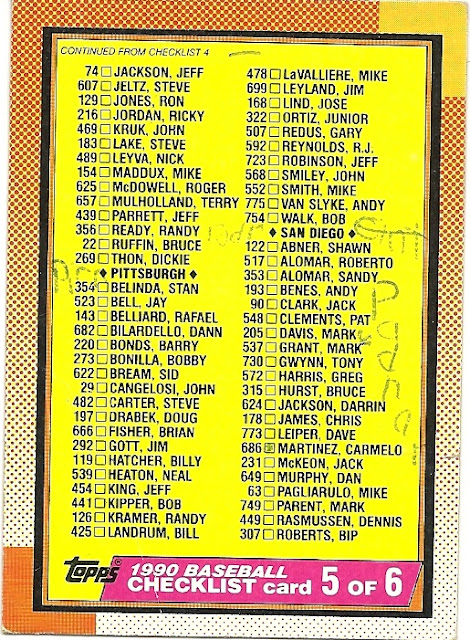 I was much amused that I first labeled San Diego as the "Gints" (no "a") and then corrected it to the Padres.  To be fair, San Diego and San Francisco are pretty much the same to a 7 year old living in northern Pennsylvania.  I also apparently couldn't spell Giants (nor could I spell Cardinals as the back of the card shows). 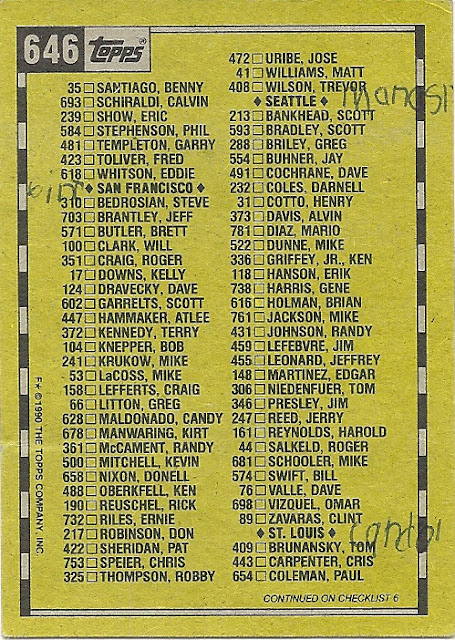 As I sorted my cards, I found another checklist that was a casualty of young child scribbling warfare.  This time however, it's not my fault.

Nope, either my youngest brother or younger sister got ahold of my cards and decided to make some of their own markings on my checklist.  At least this one is on the back of the card.

What does all of this tell me?

For one, it reminds me (once again) that cards are to be fun.  Using checklists can be fun.

(Spelling Giants as "Gints" is probably not fun at any age.)

What else does this tell me?  I think Topps should consider bringing back some of the old school elements (like simple checklists) for their various brands aimed (at least in part) at kids.  Seeing the cards that I still needed to complete the Reds team set was exciting for me, it gave me something to look for when I opened up a new pack of cards.  Furthermore, I'm sure it helped me with numbers (but apparently not spelling).  Education is what it's all about right?

Well, that and fun.