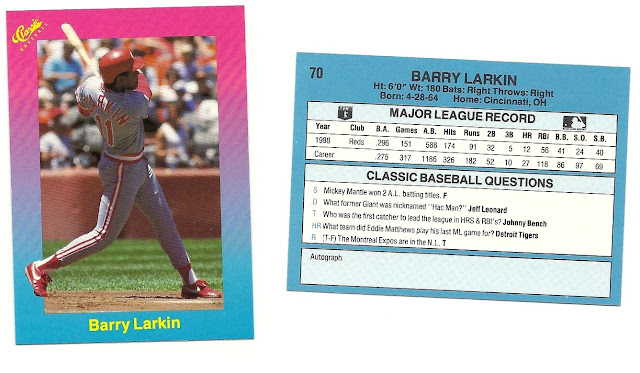 Classic released two different Barry Larkin cards in 1989.  One was the light blue card seen above, the other was a purple card released in the travel edition of the Classic game.  Despite being a rather "cheap" looking (and feeling) card, Classic did manage to use two different images of Barry - something that modern card companies often fail to do!  Other than that, there's not much to say about the card.  The front is ugly - though I like the photo.  The back is even worse, though I like having Johnny Bench as an answer to a trivia question on Larkin's card.  The spot for an autograph at the bottom of the card is hilarious - I wonder if a MLB player was ever asked to sign a classic card in that little box?  I highly doubt it.
Barry Larkin Classic 1989 Larkin Collection