As usual, we begin with the box topper.  Box #3 returned us to the 1966 buyback cards as we pulled a Tracy Stallard card for the Cardinals. 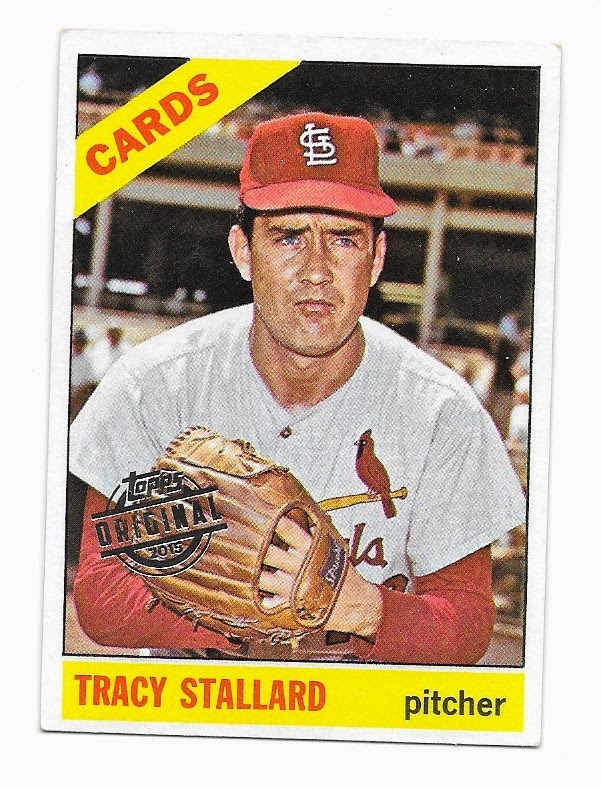 The Stallard is a bit warped but otherwise it's in pretty good shape with only a couple of soft corners to complain about.  For my money, if I were a Cardinals' fan *shudder* I would like the card a lot!  Hopefully Brady enjoys it!

Now, on to the rest of the box.  As usual, we pulled eight short prints (as expected): 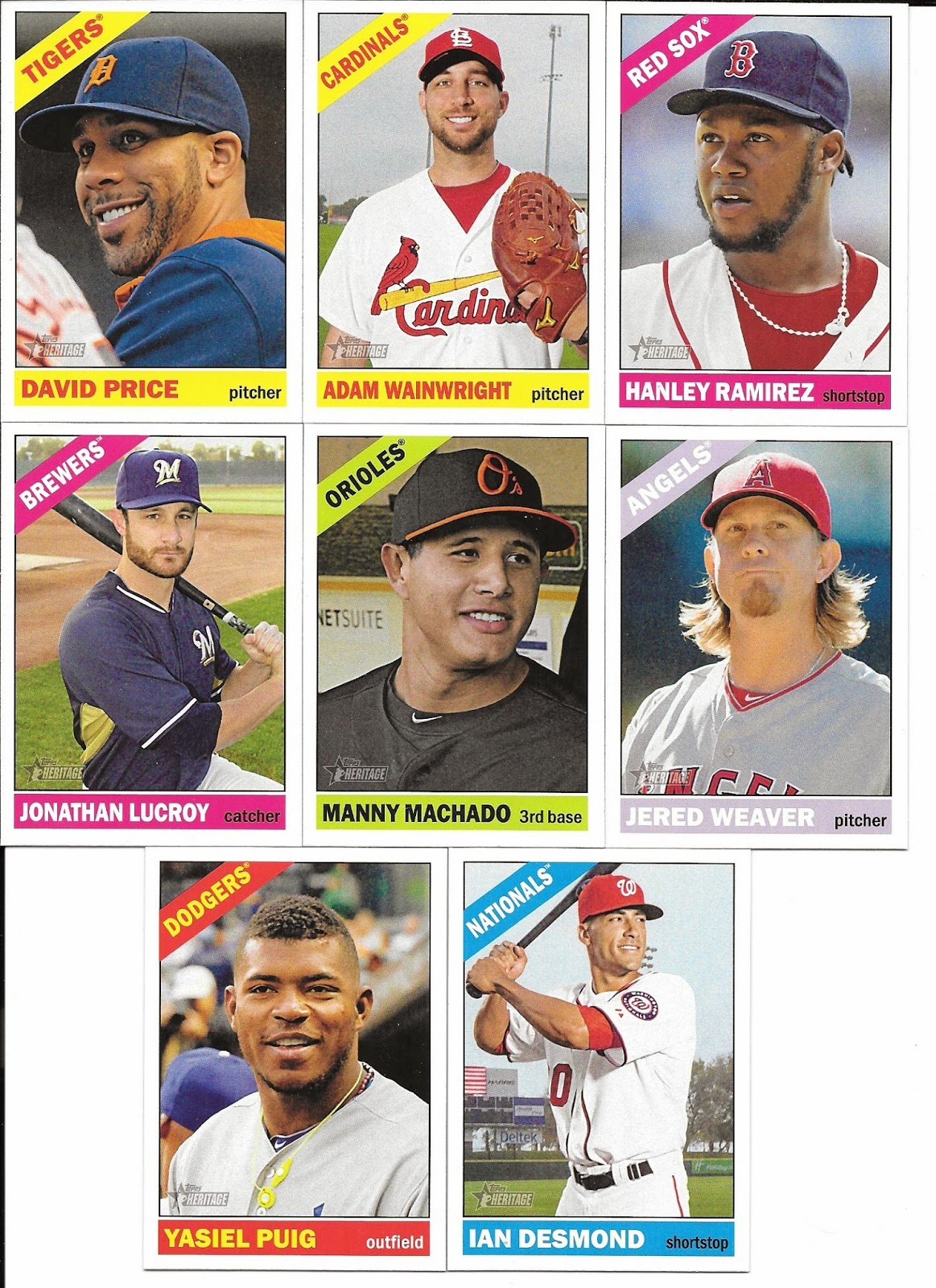 We had a pretty nice mix of teams this time around - all eight short prints belong to different teams in fact which is good for a group break!

The third box had the usual assortment of inserts.  At this point, I'm already guessing a lot of you don't care about the News Flashbacks...but I think the design is alright. 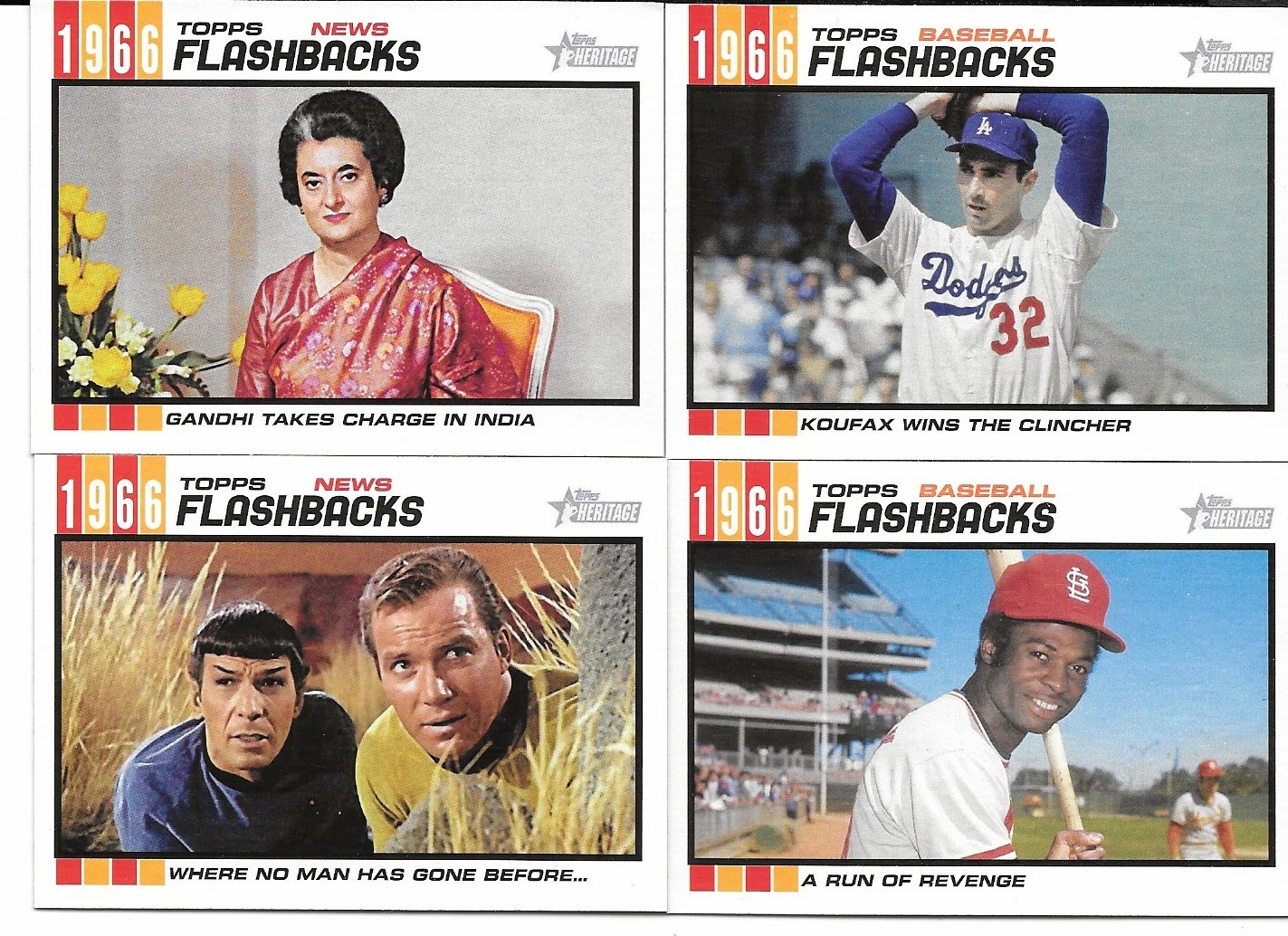 The Baseball Flashbacks go to the Cardinals and Dodgers - two teams that are quickly becoming quite wealthy from the group break!

Speaking of Dodgers' wealth, they landed another Then & Now card (since both Koufax and Kershaw are Dodgers) while the Pirates and Astros will have to have a coin flip to determine who walks away with the other Then & Now. 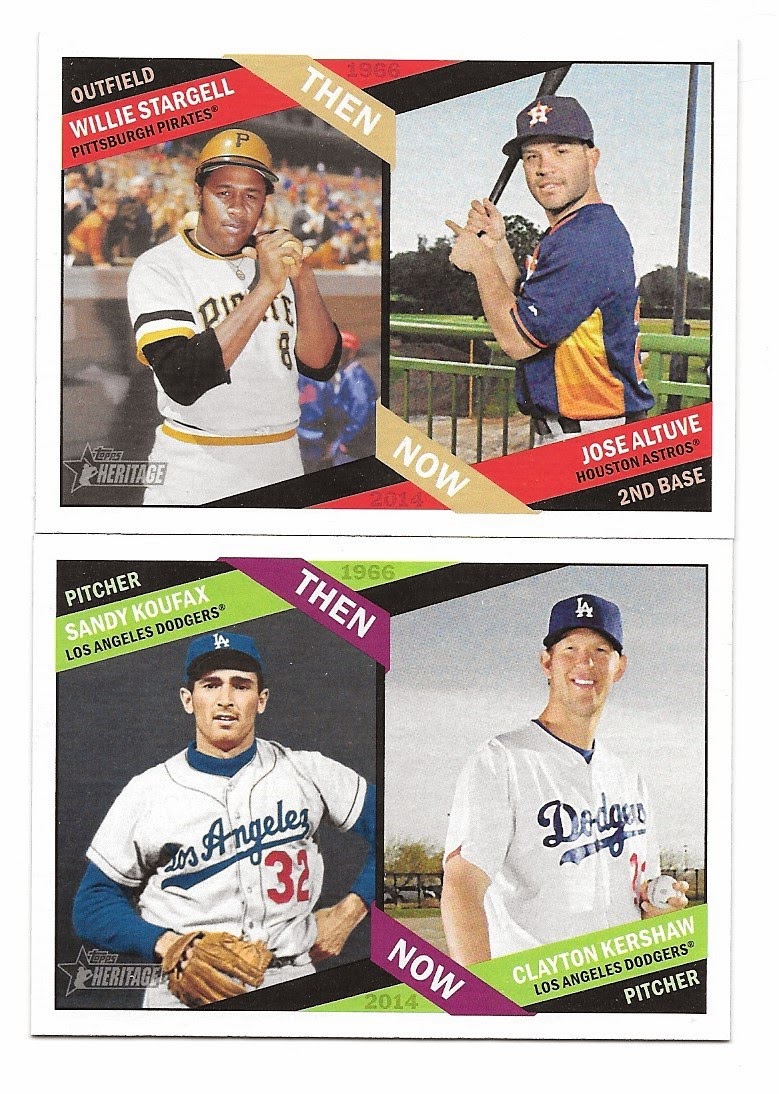 The last of the common inserts for the box were our three New Age Performers.

This time around we find inserts for the Orioles, Nationals, and Rays - three teams that hadn't had an insert thus far which makes me happy as the group break host.  Spread that love around a bit!

Our Chrome card this time around also goes to the Nationals - it's Bryce Harper and it is numbered 456/999 on the back (you'll have to believe me about that since I didn't bother to scan the back of the card). 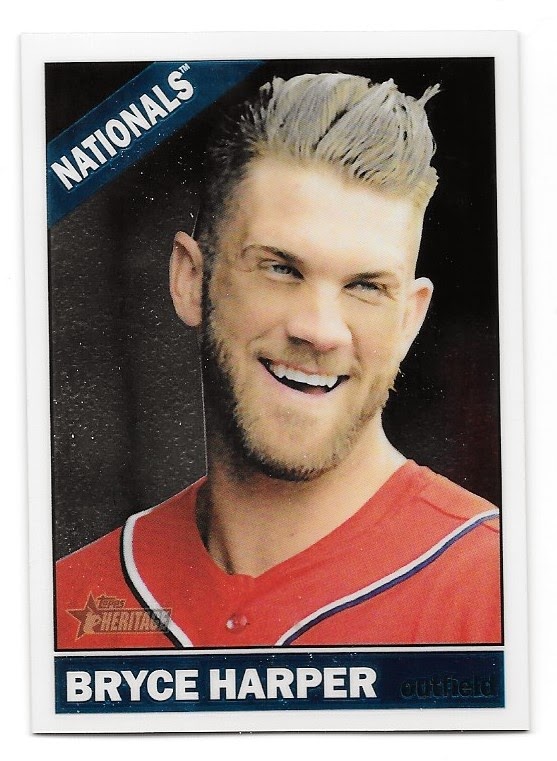 We also found one of the rarer (1:41 packs) Chrome Refractors - and it's going to Matt since he claimed the Pirates. 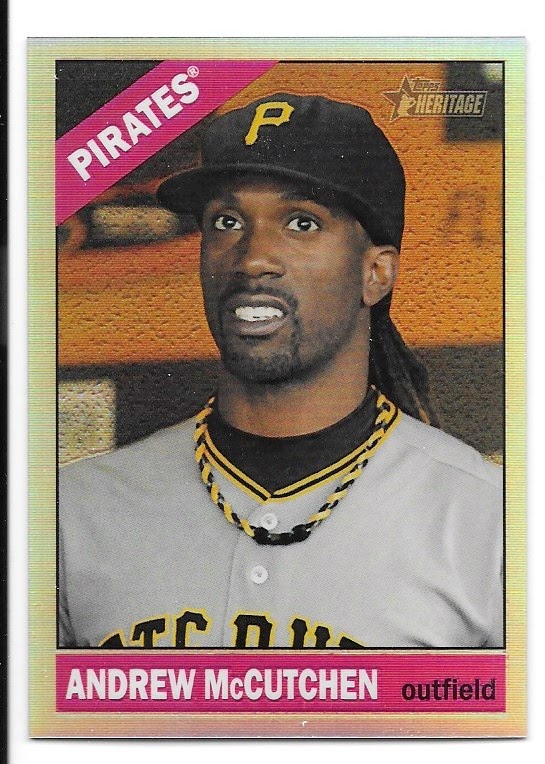 That's a nice looking McCutchen card!  It's numbered 130/566 on the back (though again I didn't scan the back of the card).

Our hit of the box was a Matt Kemp jersey card for the Dodgers. 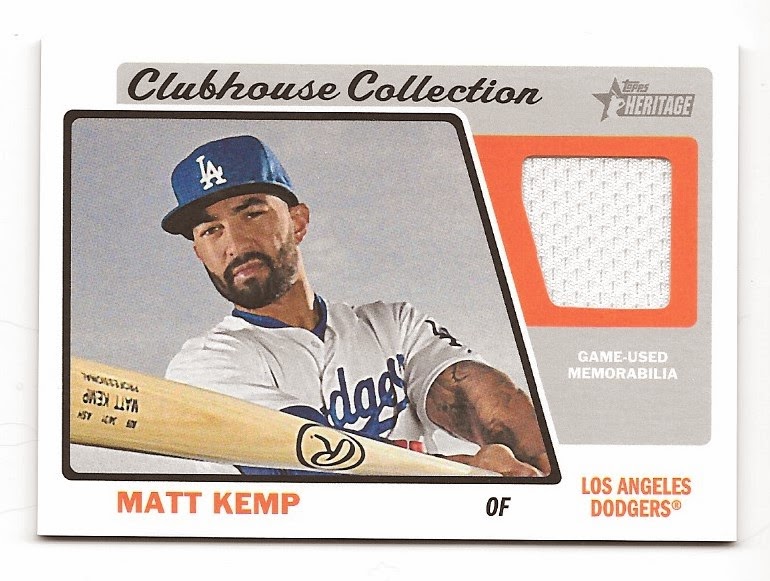 This year's relic design is quite nice..but it's a bummer to pull a white bit of cloth.  I liked the other two jersey cards better since the cloth swatches were colored.  That said, it's still a solid card - and certainly a nice addition to any Dodgers' collection!

Our action variation (which basically serves as a second hit in each box) goes to the Nationals... 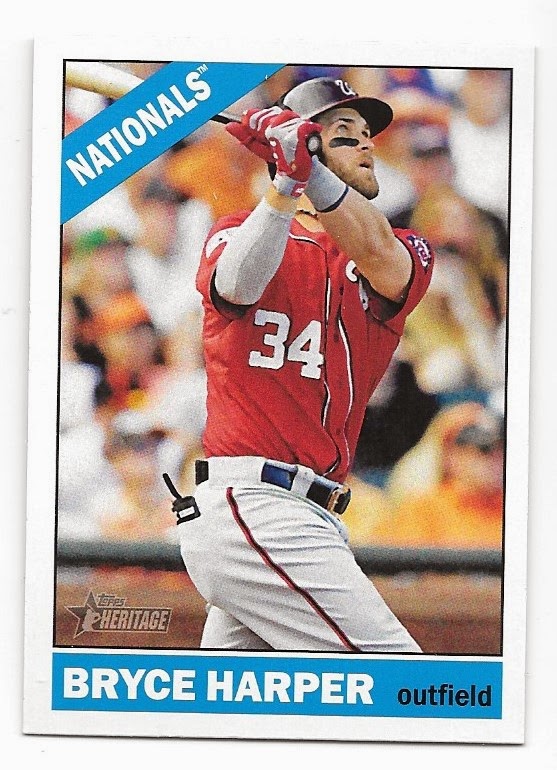 That's Bryce Harper making another appearance...and in doing so easily moves the Nationals near the top of the "best team so far in the break" list!

Finally, we end with our second Gum Stain card.  This one I think I missed when doing the video... 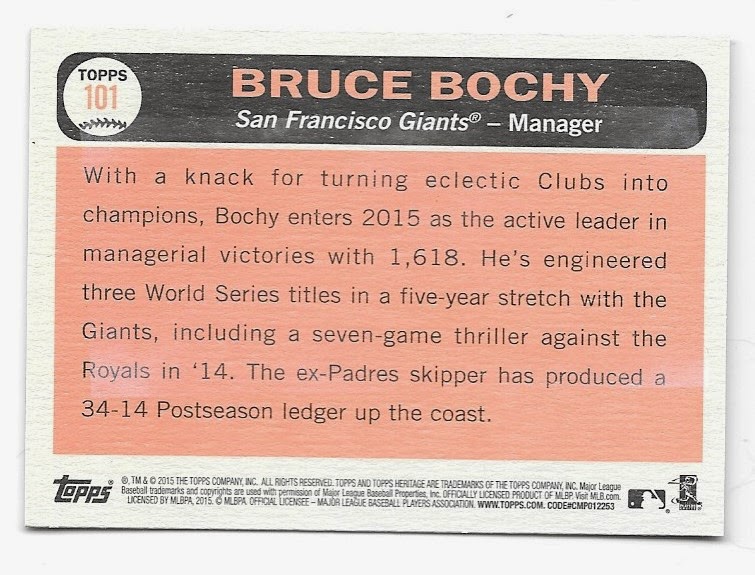 That's Bruce Bochy of the Giants (congrats Adam) - you can perhaps make out the gum stain near the top of the card.  The thing definitely smells like you could chew it...though I don't recommend that.

That's three boxes down - I still have three more to go from the first video and then I need to bust the remaining half of the case.  In addition, I still have the Clubhouse Collection box with another 20 hits waiting to be opened!  Stay tuned for more in the near future!
Group Break 2 in 2015 Topps Heritage 2015