on March 19, 2015
Welcome back to another edition of my super long, drawn out Theme Week!  It's not fair to call it a theme week anymore seeing as how I started this back in 2014.  That said, it's still going strong - and if my group break hosting duties would stop interrupting, it's a popular series of posts as well!  Although delayed, I'm happy to report that not only do I have a Better Know a Blogger post for today, I will also have a few more before we finally close the door on the theme week!


I’m a player collector first and foremost. I’ve been mixing that with some light set collecting as well lately since it’s been getting harder and harder to happen across Griffeys I still need for cheap. I’ve pretty much always collected like that: focusing on one thing. In coins it was Lincoln cents. In posters and prints it was Radiohead gig posters. I find one thing and go after it with both barrels.

4. In your opinion, what could the major card companies (Topps, Panini, etc.) do to make your style of collecting better for you?


As long as they keep putting Junior in the occasional insert, I’m good. Really if I’m not set building it makes very little sense for me to buy packs at all, but I do and probably always will.
I’m definitely for the rehashing of old, retired brands so long as they are handled with care. Panini’s new version of Donruss is unpopular because of the design, but the design felt like early Donruss to me. At the same time the set should be something new and updated as opposed to the simple borrowing of elements from various 80’s designs which is precisely what Panini did. I really enjoy their bringing back old designs as inserts a la 2014 Donruss Series 2 having a Studio insert. That was awesome.
I would also like to see more companies get licensing for variety in the market and to keep the competition lively, but that’s more of an MLB issue.


5. What is your favorite part of your collection?  This could be one specific item, or a binder of cards, etc.


It would be far too easy for me to say, “My Griffeys” here, but it’s tempting. I guess I’ll go with the Ziploc bag full of my absolute best cardboard that lives in my safe deposit box. That’s where I keep all my irreplaceables. Everytime I go in there I take a moment and flip through the stack of screw cases and BGS slabs.

6. Most of us have a favorite song that we like for no good reason – heck, it might even be embarrassing.  Do you have a favorite baseball card that might fit that bill?


I do! 1989 Topps #687 Alvin Davis. I honestly cannot tell you exactly what it is about that card, but I keep every copy I come across. Big face, great lighting, awesome colors and Mariners team name. It’s just perfect. 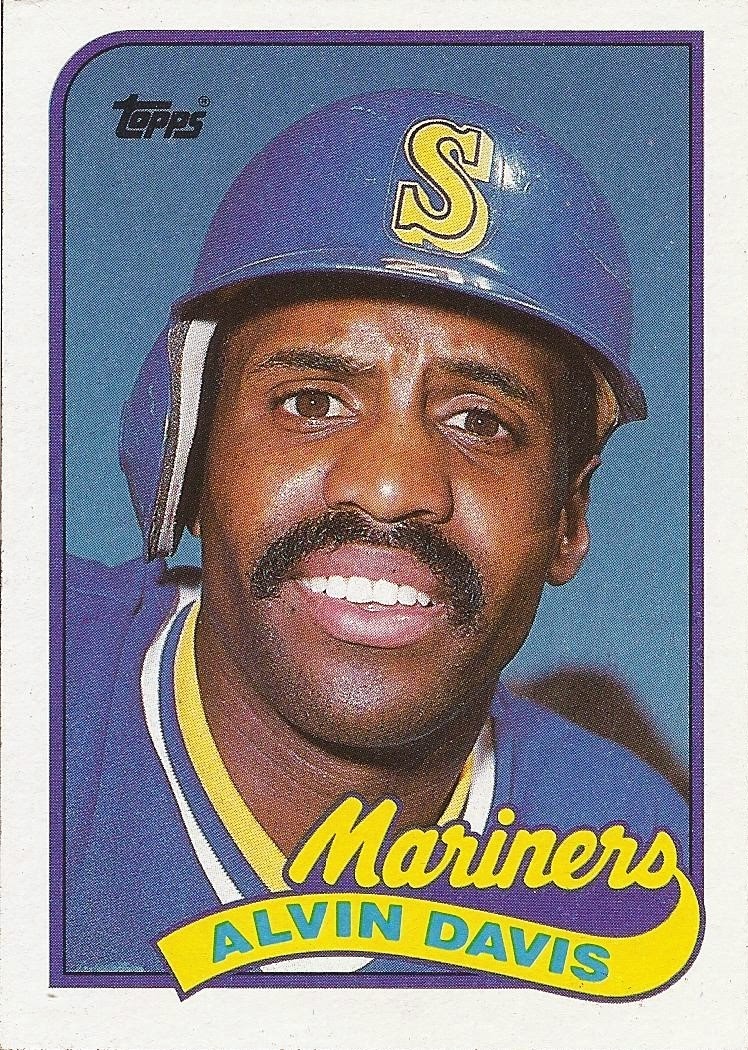 7. If you were forced to part with your entire collection except for one card, which card would you keep?


While I have several copies of the ’89 Upper Deck Griffey rookie, I would keep the one I pulled from a pack back in the mid-90’s. I put that one in one of those 1”-thick four-screw behemoths, and there it’s been ever since. The centering is not even that good, but it’s still my favorite card and my best cardboard memory.

8. Many of the blogs (including my own at times) seem to decry Topps’ lack of vision and creativity.  Can you think of something creative that could be done for an upcoming card set?


LOTS of things. I have ideas for inserts and parallels that, frankly, I’m shocked haven’t been done yet. I would mention a few here, but Heath Ledger says if you’re good at something, never do it for free. I will say that I think Topps has been getting better about stepping outside the box.

9. What is your profession?  How did you end up there?  If you are in school, what do you plan to major in and/or what job do you hope to get after graduating?


I am in banking and have been for six years. My focus is small business and retirement/investment, but I also do some mortgages, auto loans, home equity lines, and credit-related stuff. It’s a sharp learning curve, but I’ve gotten pretty darn good at it.

10. What is your favorite place that you’ve ever visited?  Why?


It’s always been on my bucket list to see the Northern Lights, and we finally got to do that last month. It was a seven-day trip, and we only saw the Aurora once for 90 minutes in the middle of the night, but it was unforgettable. New York City is also a fantastic place to visit, but we don’t leave home all that often because we live in the greatest city I’ve ever been visited.

11. Many of us have favorite foods or customs that are somewhat local to where we live.  Do you have any such things that you particularly love?  A website link to specific products would be spectacular.


Properly boiled crawfish is one of the greatest foods on the planet. Really.
Down here in New Orleans we’re also pretty well-known for our jambalaya, shrimp gumbo, fried catfish, raw oysters, etouffee, red beans and rice, every kind of poboy, shrimp and mirliton, turtle soup, and stuffed artichoke. I highly recommend any foodies out there to book a food tour of New Orleans. Some of the dumpiest looking buildings in this city serve world-class cuisine every day for less than ten bucks. It’s wonderful.  Also, I put half ateaspoon of this in almost everything I cook.


12. Do you have any other hobbies besides card collecting?


Way too many: coins, art prints, vinyl, Legos, single malt scotch, and probably a dozen or so more things I just can’t think of or don’t want to admit to.

13. Tell me something interesting about yourself (that we haven’t covered in the first twelve questions).


I’m in two movies. Glory Road, a Disney basketball movie, and Pizza My Heart, an ABC Family TV movie. I was photographer #7 in the former and a churchgoer in the latter. You can’t throw a rock in a mall around here without hitting people doing extras casting.

As always, I must first begin with a big 'ol "Thank you" to our latest volunteer in my ongoing Better Know a Blogger series.  Without all of you, my poor little Theme Week would have shriveled up and died a long time ago!

Now, let's take a look at T.J.'s answers.  First of all, T.J. is taking part in the Wallet Card Contest and for it he's gotten a lot of rave reviews.  First, there was his wonderful trip to see the Northern Lights (which I linked to above).  Then, there was his time at Mardi Gras...which led to Upper Deck making him some sort of Griffey dumping ground for autographs of The Kid himself.  I think it's safe to say that T.J. won the Wallet Card contest just for the stuff he's gotten from Upper Deck..not to mention the fact that he's hinted he might be working with Upper Deck is some fashion as well.

Unfortunately for me, I missed out the Wallet Card contest so it's too late for me to have any shot at dethroning T.J....but I think it's safe to say that wouldn't have happened anyhow!

Moving on to the other answers, I was happy to see LEGO mentioned as another collection since I also am pretty big into LEGO stuff (you can find more of my love on my LEGO-centric blog).  I also found it interesting that T.J. has been in a pair of movies - very cool indeed!  Finally, T.J. joins a few other bloggers in that he is part of the financial world...it sure seems like the vast majority of bloggers are either in education or in some financial sector.  Not everyone, but a lot of bloggers!  For myself, I'm currently in education but I've given some serious thought at a career change (most likely moving to the financial sector as well)!

Thanks for taking the time to answer my questionnaire T.J.!  As for everyone else, there are still a few more entries in the Better Know a Blogger series before I need to retire it...so if you still want in but haven't gotten your questionnaire filled out, get on it!  Or, if you need the questionnaire emailed to you, shoot me a quick email and I'll get it out to you ASAP.  As I said before, once I post my own answers I will consider the theme week complete!