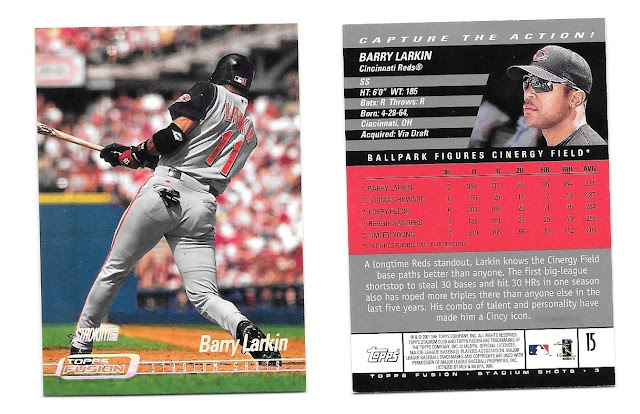 The Topps Fusion set is a strange beast of thing.  Topps tried to mash up five of their iconic set designs all into one set.  I'll let baseballcardpedia explain the thing:


2001 Topps Fusion is a 250-card set released in March, 2001. The product attempted to fuse five of Topps' brand names (Bowman's Best, Finest, Gold Label, Stadium Club, and Gallery) all into one product.
Card numbers ending in a 1 or 6 are done in the style of Bowman's Best (refractive chromium stock); 2 and 7 Finest (etched chromium stock); 3 and 8 Topps Gallery (canvas); 4 and 9 Gold Label (thick plastic stock with holographic foil); and 5 and 0 Stadium Club (high-glossy and full bleed).

As you can see, Larkin gets number 15 in the set which means his card is a Stadium Club design - you can even see the Stadium Club logo on the card front (along with the Topps Fusion logo).  Kind of weird and confusing to have a pair of different brand logos on a card front, but that's early 2000s baseball cards for ya!

One thing that I learned while writing this post is that Barry has two other base cards in the set.  He gets card #21 and card #28 as well.  Card 21 is done in the style of Bowman's Best while card 28 is in the style of Topps Gallery.  As of the time of this post, I do not own either of the other two Larkin base cards.

Overall, I think the Topps Fusion idea is kind of wild, but as a "one-of" set every now and then I kind of dig it.  If Topps were to resurrect the idea, I'd like to see Topps Tek get in on the action as well as maybe Gypsy Queen.  That'd be a weird pack to open, but it could be kind of fun!
Barry Larkin Larkin Collection Topps Fusion 2001