I Joined a Player Break and All I Got Was...

on August 09, 2019
This year, Barry Larkin was once again a featured player in Topps' Allen & Ginter set.  Unfortunately for me, Larkin is a short print in 2019 and I didn't pull any of his cards from the various boxes and blasters that I ripped.  Therefore, I decided to join in on a "player break" via eBay where I obviously selected Barry as my player.

For a total cost (including shipping) of $10, I was to get all cards featuring Barry including any base cards, mini cards, and inserts (pretty sure Barry's only insert is a rip card this year).  The break consisted of two full cases of 2019 Ginter so I figured I had a decent shot at getting some nice minis plus a bunch of his base card (I wanted one for my set and one for my Larkin binder at least).

I didn't watch the break when it was posted live, though I did catch the last few minutes when the breaker did the two case recap so I knew I didn't get a rip card but I didn't know if I hit any nice minis.  Flash forward a few days later and the envelope of cards arrived in my mailbox.

First up, the base cards. 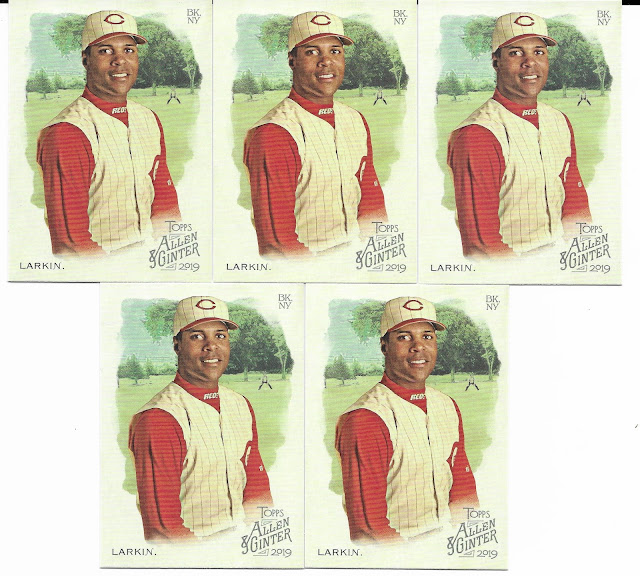 Kind of amazing that two full cases only yielded five Barry Larkin cards - and unfortunately for me, not a single one of the hot box parallels (hot boxes are one per case).  Even worse, I only landed a single mini but at least it was the slightly rarer A&G back type. 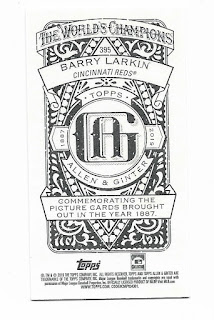 Group breaks are always a risk but you generally know you'll get a lot of cards of your team.  Player breaks seem much, much riskier in that you can rather easily end up with virtually nothing for your money.  That said, it was probably worth the gamble for the chance of a rip card plus some of the rarer minis.
eBay