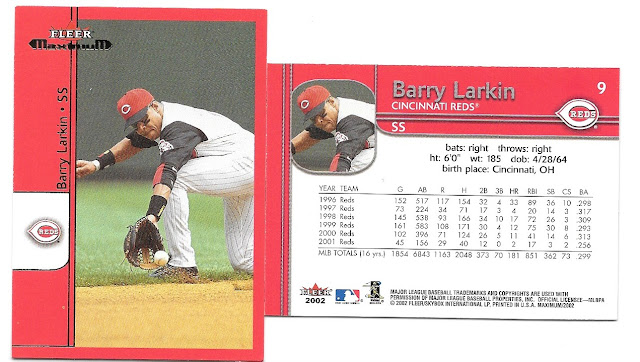 The 2002 Fleer Maximum set is yet another mostly useless offering from Fleer, though I suppose the simplicity of the set design is somewhat endearing for its time.  In truth, I think the simple design was more due to laziness as opposed to artistic expression, especially when you flip the card over and realize that Fleer simply reused the front image on the back (but cropped it way, way tighter).  Couple that with the fact that you only get six (?!) years of career statistics and no write-up on the backside of the card and you've got a set that's probably best left in the past.

Unfortunately, being a Larkin collector, I can't quite yet leave this set in the past.  There is still a "To the Max" parallel of Larkin's base card in this set that I need to track down.  Each "To the Max" parallel is serially numbered to either the featured player's highest season batting average (for hitters) or total number of strikeouts in a season (for pitchers).  Luckily for me, Larkin had a fairly robust average of .342 in 1989 which means there are 342 "To the Max" parallels of Larkin out there, surely I can eventually find one of those, right?!

In addition to the parallel, Larkin shows up in two of the insert sets - one being a retail only Maximum Power insert while the other is Power Bat relic set.  For the relic set, Larkin was actually one of the short-printed players, according to Fleer only 50 copies of his base relic card were made while another 25 of the Gold parallel of the relic card were created.

As you can see, despite being such a simple little set as a whole, collecting all the Barry Larkin cards from the set has proven to be anything but a walk in the park (at the moment I don't own any of the Larkins from the set other than the base card at the top of this post).
Barry Larkin Fleer Maximum 2002 Larkin Collection