on September 09, 2019
I'm still working my way through trade packages that arrived back in August...or, in the case of this particular package, late July!  No worries though, I will make sure that each and every person that sends me cards (or LEGO as you'll see in a future post) does get proper credit on my blog.  In fact, I'm super appreciative of all the trading lately - the fact that I can't keep up with the trade posts is actually a good problem for me, especially since I've been blogging consistently (so it's not a case of my laziness this time, hah)!

Anyhow, today's package is courtesy of Rod over at Padrographs.  According to my records, I sent Rod a package back in 2012 (from a group break I held which doesn't really count as a trade).  Then, nothing until last year in which Rod surprised me with some cards.  Now, in 2019, Rod and I have sent a total of five packages to each other.  I think it's safe to say that I now have an excellent trading partner - and each of us has an avenue to get rid of a team for which there aren't all that many current collectors (Reds to me, Padres to Rod).  And, at least for this trade, that's exactly what happened.  Rod dumped a big envelope of Reds on me - and of course, a number of the Reds were instant keepers for me (one man's junk is another man's treasure, or something).

Before I show off a few of the Reds, I need to start with the back side of Rod's custom baseball card of himself. 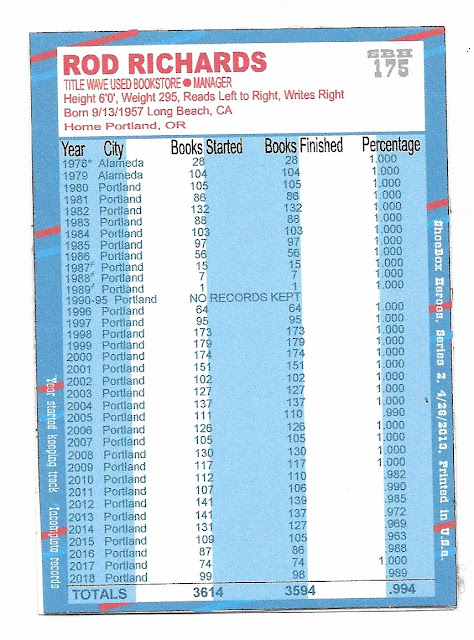 Just check out those reading stats.  And here, I was proud of myself for setting a goal of reading 12 books in a calendar year (and as a spoiler alert for a future Blog Resolution Check-in, yes, I did manage to read 12 books already)!  If you are someone else interested in reading, I highlighted the first four books I read this year in an earlier post (see here).

Now, for the cards that Rod sent my way.  This particular envelope was heavy on cards from sets released in the past couple of years which is perfect since I haven't bought a ton of new product (in fact, in 2019 I haven't bought any sets other than Allen & Ginter).  I've dedicated 2019 to trying to finally clear up my way-too-long want list and as such, buying even more new sets hasn't been in the cards*.

That's where trading comes in handy though as Rod had a nice supply of new Reds for me including this Topps Big League card of Raisel Iglesias. 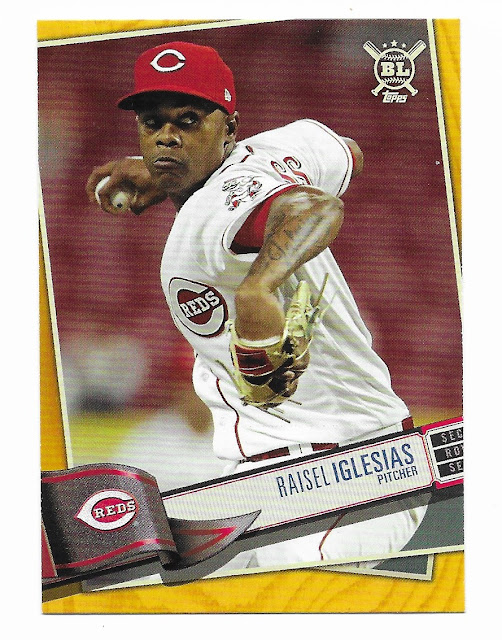 Despite the super cheap feeling card stock, I like the set design for the Big League.  I'm not convinced that Raisel is long for the Reds after 2019 but who knows, at least he lasted longer as a Red than Yasiel Puig. 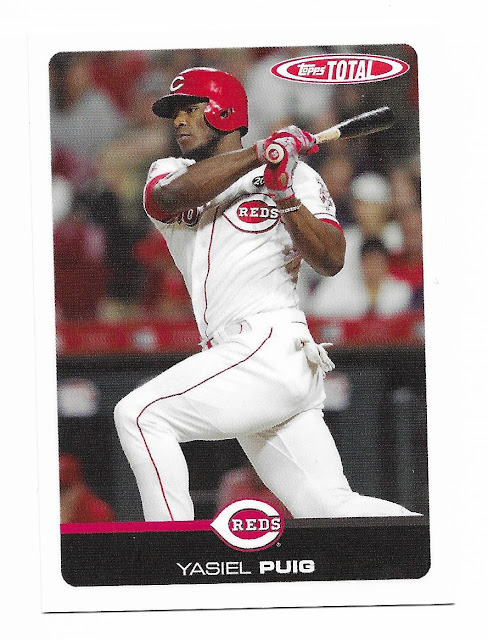 Another set that I haven't bought any of (and won't, ever, since I believe it's an online-only exclusive which I think is stupid for a set that should be catering to set collectors like me)!  At least the card stock is better on this one.

And finally, one more to show off since I'm still high on Reds' rookie Nick Senzel. 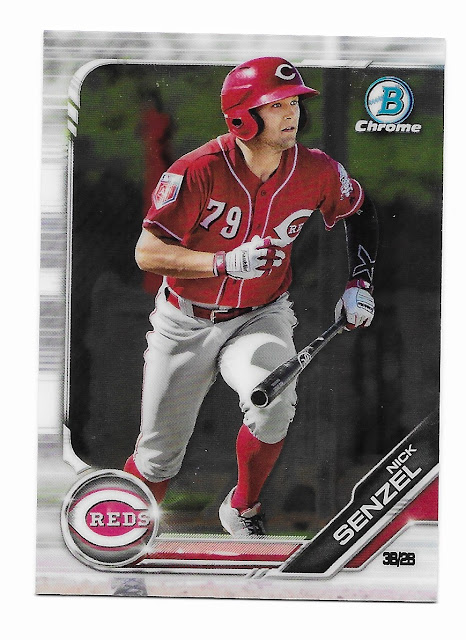 Senzel has been perfectly okay in his first year at the big league level (hitting around .260 with a tiny bit of power) but I'm hoping for bigger things from his next year.  I've actually started a small PC of Senzel, that's how much I'm hoping he pans out for the Reds!

I'm also hoping that Rod and I can continue our trading into next year with the same great results as we've had in 2019!  Many thanks Rod, and as always, should anyone else want to trade be sure to check out my want list and make an offer!
Delivery Time Padrographs