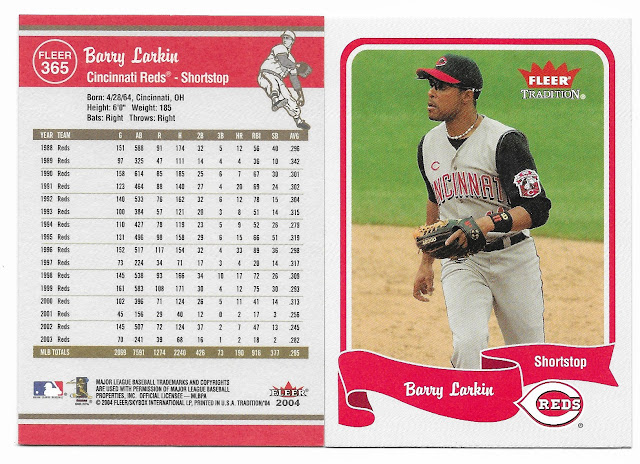 The 2004 Fleer Tradition set is a rather nice, albeit simple, set.  For Barry's card, there's a rather unique image used for the front of the card and then nearly full career stats on the reverse side.  I think that Fleer missed a small opportunity to individualize the cards a bit more with the small silhouette in the corner of the back of the card - they should have used either a fielding person or a hitting person for non-pitcher cards.  Other than that though, this is a solid card that I have no real complaints about.  In fact, I like this set enough that it would have probably been a set that I would have collected in full had I been an active card collector in 2004 (instead I was a junior/senior in college).

Even more amazing?  The 2004 Fleer Tradition set has zero parallels...and since Larkin wasn't featured in any of the subsets nor the inserts I can say that I have the entire Larkin collection from this particular set (you are looking at the lone card)!