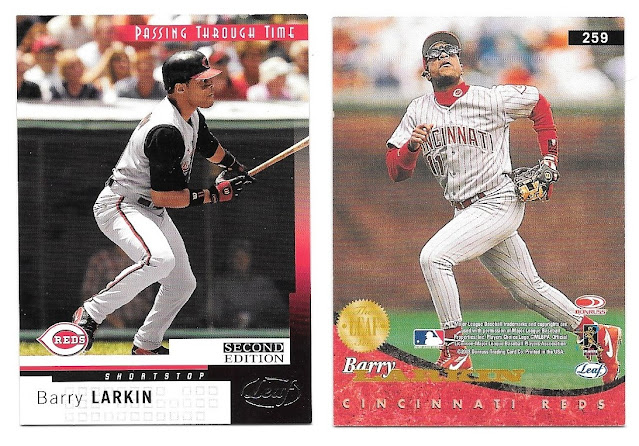 This is the other Barry Larkin base card from 2004 Leaf (the first being shown off here).  As I said in the previous post, the Leaf Second Edition set is nothing more than the retail version of the "real" Leaf base set from that particular year.
This particular card is from the Passing Through Time subset.  As you can tell, the back of the card is actually a "reprint" of Barry's base card from the 1994 Leaf card.  Kind of a fun throwback idea, even if it's a bit odd for the "subset" look to really only be apparent when looking at the back of the cards in 9-pocket pages.
For the Reds, the biggest difference that I noticed right away was how strikingly different the 2004 Reds' uniform was as compared to the pinstriped, tight-pant version of the uniform from 1994.  I'm not sure the 2004 uniform "vests" aged all that well either but it's still interesting to look back on what has been used in the past for uniforms!
Barry Larkin Larkin Collection Leaf 2004