Looking Back on Another Week of TCDB Trades!

I'm back with another round of trades to show off from TCDB.  If you would like to see yourself featured in a trade in a future post, be sure to check out my wants and haves on my TCDB profile!  Now, on to this past week's trades.

First up, from user Jazzleader comes a single mini card from 2020 Allen & Ginter. 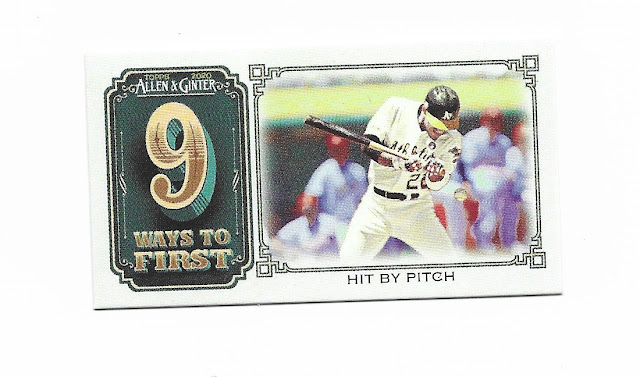 The 9 Ways to First Base mini set is a fun, baseball themed set which I like quite a bit.  I also like the fact that this is the 8th (of the nine) cards that I needed from the set!  Overall, the cost of the mini was a pair of 2019 A&G minis for Jazzleader.  At this point in my collection, I'll happily trade two dupes for one card that I need!

Net gain of cards this week (so far) from TCDB trades:  -1

Next up, from user BobbyL comes a rare trade where I actually claimed more cards than I sent away.  In this case, it was 12 cards for me while I sent off 10 cards to BobbyL. 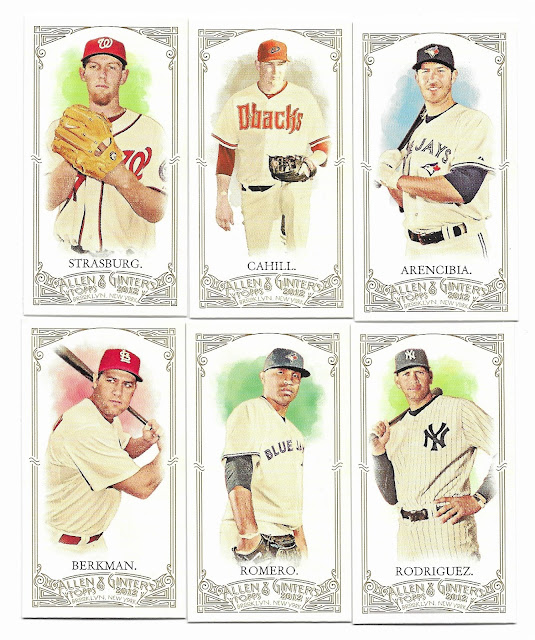 A good chunk of my haul were those six 2012 A&G regular back mini cards that you see above.  My 2012 A&G set build was fairly ambitious because it included the full regular back mini set as well as all of the usual insert sets...plus all of the Reds cards in the other mini versions.  I've still got a ways to go on this one but in the rare chance someone reading this has some 2012 minis still lying around unloved, here's what I'm looking for as of now:

The next big chunk from this particular trade was a trio of white paper framed parallels from 2013 Gypsy Queen.

Back in July of 2013, blog reader David sent me a fairly large chunk of 2013 white paper framed cards with an attached note saying he was trying to tempt me into collecting another set.  It worked because I did decide to go for it...and here we are, seven years later and I've still not come close to completing this particular set build.  If I'm being honest, this particular set is on the chopping block if I need to eliminate some attempted set builds when the calendar turns to 2021 (after all, my goal is to get my total want list down to under 90 total sets that I'm working on).  For now though, I'm happy to inch a tiny bit closer - but like I said, I'm still a long, long ways off!

Here's what I still need from the 2013 Gypsy Queen set:

The last three cards from this particular trade skewed much newer - one from 2020 and the other two from 2018. 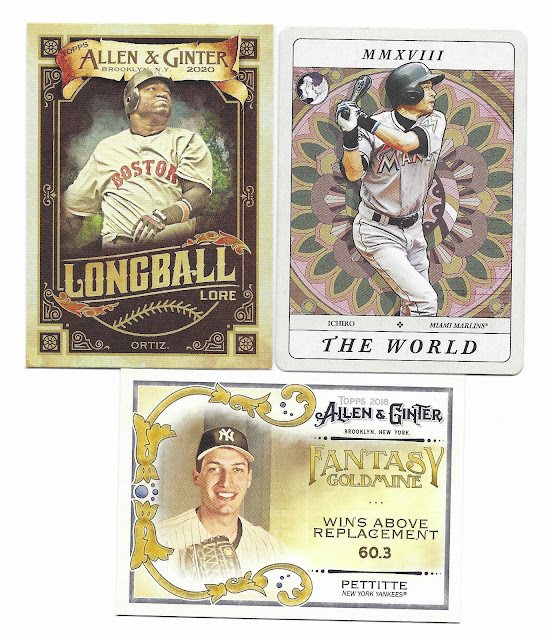 That Fantasy Goldmine is the last card that I needed to acquire from that particular set...but I can't cross the set off my want list completely since the other two cards are both sitting in my COMC account waiting for that particular website to get their shipping back under control (is COMC ever going to get caught up shipping stuff, does anyone know)?

A solid trade for sure - even if it meant a couple more cards came in my house as opposed to leaving my house.

Net gain of cards this week (so far) from TCDB trades:  +1

Next up, from the amusingly named Godzilla8you comes another trade where I ended up with more cards than I sent out!

This particular trade originated with me trying to locate the last few 1998 Upper Deck Retro base cards that I needed.  Godzilla8you had three of the remaining nine on my want list so that was a great swap right there for me.  That wasn't it though as I was able to nab a pair of 2020 A&G minis. 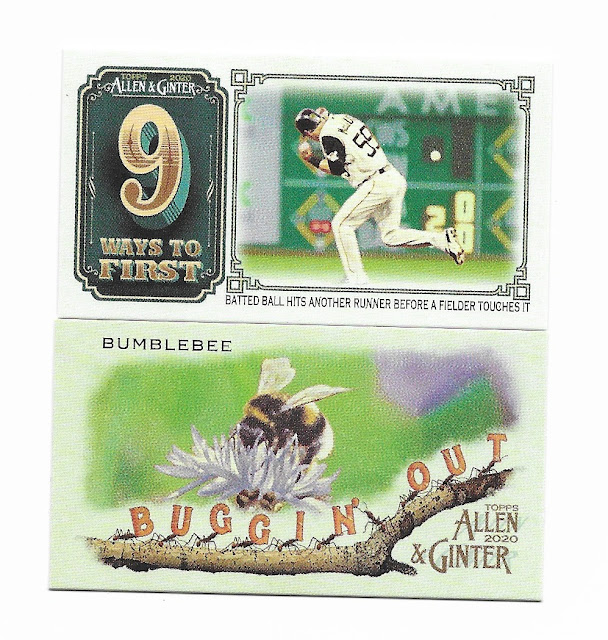 Of particular note is the 9 Ways to First mini since that's the last one that I needed for that particular insert set!  With that set in the books, I'm now at -3 overall in terms of total sets on my want list now as compared to the start of 2020.  I need to get that number to -10 prior to December so I can't give up now!!

Net gain of cards this week (so far) from TCDB trades:  +3

Next up, from user clallseven is a smaller trade where I requested a pair of 2020 mini cards:  one from the Behemoths Beneath set and the other from the Buggin' Out set.

The Behemoths Beneath is the retail only set for 2020 and I honestly don't know how people have this stuff available for trade...who can even find retail Ginter right now?!  Thankfully for collectors like myself, someone is able to find blasters and some of those people are then willing to trade!  The Hercules Beetle is the second Buggin' Out card I acquired this week (the other being the Bumblebee from the previous trade I showed off).  I do like the Buggin' Out cards quite a bit - especially when the creature in question is kind of interesting! 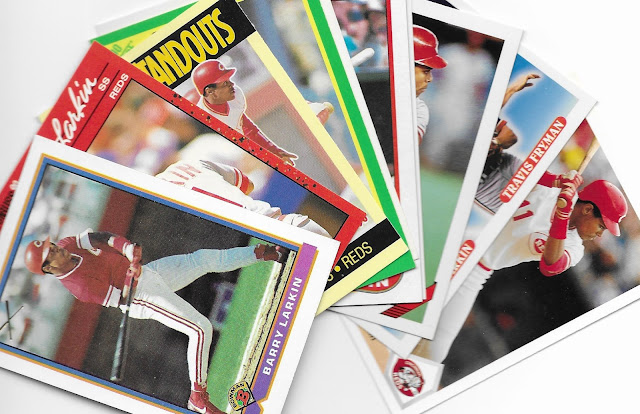 This particular trader also included a smattering of older Barry Larkin cards for me as "freebies."  I ended up already having them all in my collection but the thought was still appreciated!  I have been throwing in bonus cards in a bunch of my TCDB trades as well but I haven't been counting any of those in my ongoing net card count each week.

Net gain of cards this week (so far) from TCDB trades:  +2

Next up, from user StormSurge comes a single card that I needed for my 2009 Topps Heritage set build. 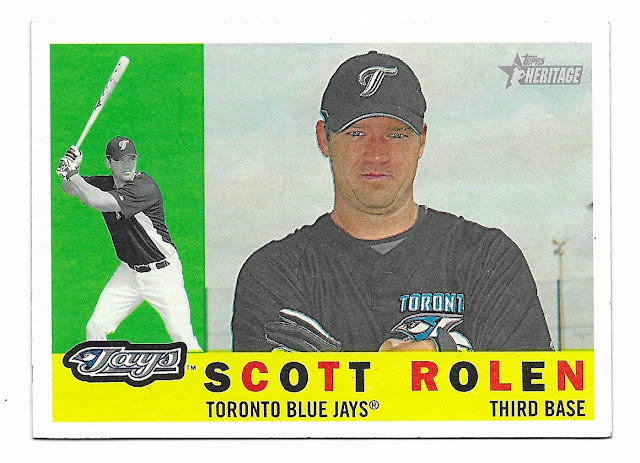 That's #426:  Scott Rolen and yes, it's one of the many pesky short prints in 2009 Heritage.  For as much as I love the Heritage line, the massive amounts of short prints make collecting the set a real nightmare.

In fact, I've actually sworn off collecting any future Topps Heritage sets until I finish those that I've begun many years ago.  For the 2009 set, I have a long ways to go yet...

On the bright side, at least I am one short print closer to completion and all it cost me was three cards from my own collection that were unwanted.  I'll take that type of trade all day!

Net gain of cards this week (so far) from TCDB trades:  +0