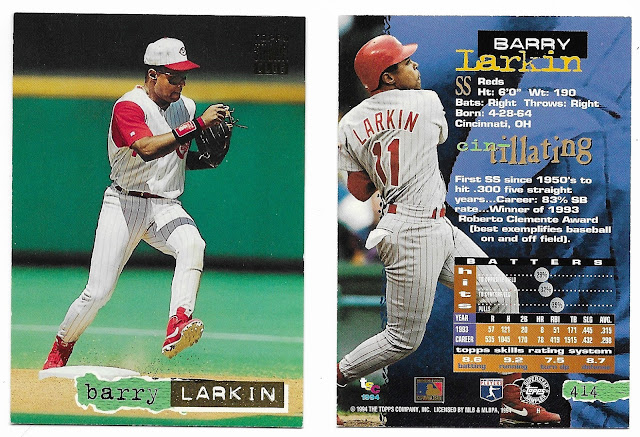 The Superstar Sampler set is a partial parallel of the 1994 Topps Stadium Club set.  Information about this set seems fairly scarce online (or at least I couldn't find much about the set).  From what I can tell, this was some sort of promotional set that was quite rare (one post said less than 100 cards of each player were produced).  At the time of the writing of this post, Check Out My Cards only had three cards from the set for sale and all were listed for over $5 each which is quite high for the overproduced era of 1994 (which lends some credence to the idea that these cards are at least semi-rare).

As for the card itself, other than the foil nameplate (last name only) and the different logo on the backside of the card, it's essentially Larkin's regular Topps Stadium Club card from the year (which I covered here).  I don't own many of Larkin's rarer cards (especially from the early and mid 90s so I'm extra pleased to have this one tucked away in my collection, even if it is virtually identical to the much more common base card of his).
Barry Larkin Larkin Collection Topps Stadium Club 1994