The Barry Larkin Experiment: Round 1W

on June 22, 2012
I've neglected the Barry Larkin Experiment for quite some time, but it's finally time to get the votes going again.  As it stands, we have completed 22 vote-offs which have whittled 88 Larkin cards down to 44.  There are still three votes remaining in the first round and then we will have our top 50 Barry Larkin cards.  At that point, voting should get more interesting as much of the chaff will have been weeded out via previous votes.  However, we can't get too far ahead of ourselves.  As usual, we first take a look at the previous voting results (Round 1V). 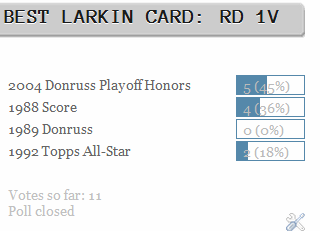 As you can see from the poll results, the 2004 Donruss Playoff Honors card eeked out a victory ahead of the 1988 Score.  Poor '89 Donruss got shutout, always embarrassing.  Enough talk about a vote that most of you probably forgot your took part in - let's move on to the next round! 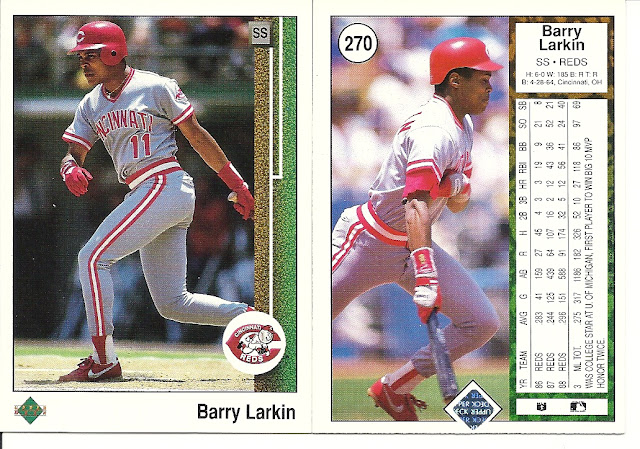 Without question, the 1989 Upper Deck set was a game-changer (are you listening 2012 Topps?).  The set featured holograms, full color photos on front and back, and some great photography.  Unfortunately, this particular card doesn't have the best photos in the set - but it's still fairly nice.  I could see this moving on to Round 2 without much of a problem. 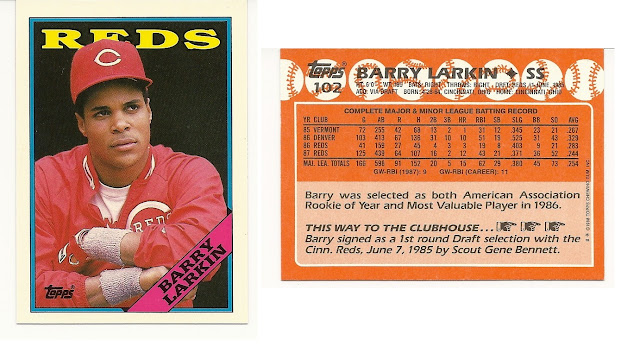 Ok, I'll admit it.  I don't get why people get bent out of shape over the Tiffany set.  I guess we'll find out in a bit whether more people feel like I do or not.  It should be noted that the regular version of the 1988 Topps card tied for second place in its poll. 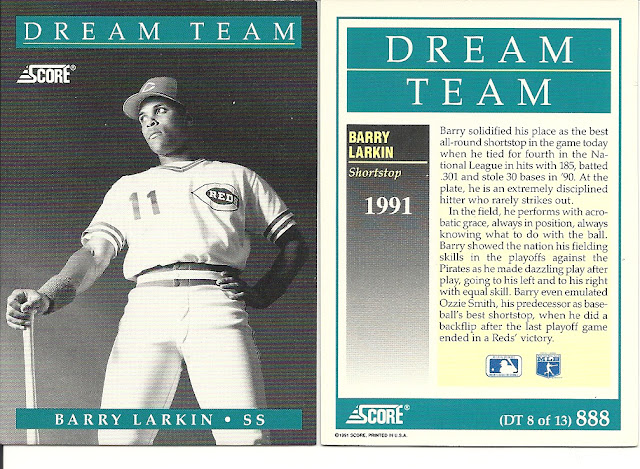 I like the '91 Score set - it's lots of fun with all of the various subsets.  I don't think most people hold the set in such esteem but we'll find out.  This card ought to beat the Tiffany card anyhow. 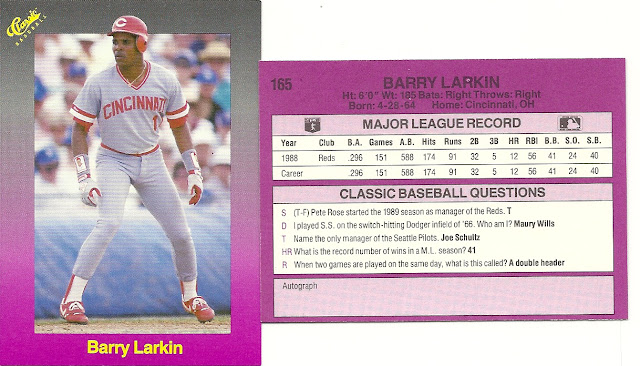 Oh man, Classic.  I have no idea what to say about the Classic cards except that I'm glad they are no longer.  Hideous, annoying, and wayyyy too many variations and sets to keep track of.  I don't even like the trivia questions!

Those are your nominees, if you send the purple monster through I might be through with this experiment.  Otherwise, it's up to you.  Go vote on the sidebar!
The Barry Larkin Card Experiment